I lectured today on journalism in WWII, in my joint class "War Generations," with history prof and friend and fellow ex-chair Jim Baker. This is about the fourth class we've done together--half of history majors, half of journalism or mass comm majors. First was Vietnam, then WWI, then the 20th century wars.

This is the way college classes should be taught--upper level students having fun and paying attention to two gray-haired experts in their fields. Of course, Baker carries most of the load in the classes, first because there's so much about the wars that our students don't understand. Second, because I'm more clever than he (not smarter), and figured out how not to work so hard.

But today was pretty much my show. Last week we set the stage with the attack on Pearl Harbor and the coverage, and the causes. Today I talked about America depending on the radio and newspaper correspondents to know what was happening since there was no TV, videos, etc. Of course I had to explain journalistic style to the history majors because the entire class has to write once a week.

My comments also talked about how most correspondence was the equivalent to a "letter home." I showed some actual letters from my uncle Mike to my grandmother from 1944-45, plus a copy of an Ernie Pyle column, plus headlines from the Pearl Harbor attack. Pyle's writing serves as the guide to how to write well, and I spend quite a bit of time on that (15 minutes). It helps that there are some great web pages out there, thanks to the Internet, that we can flash up on the big screen.

Baker's emphasis is on historical causes, and especially the soldiers, the common fighting men and women, and on the effects on the home front. Thursday we look at the mental trauma caused by the war. Our textbook is Studs Terkel's The Good War, where he interviews WWII survivors, men and women and military and civilians about their experiences. A bunch of snippets that show the effects on the common person. We bounce around a lot in the book, picking and choosing for our content.

The students have to bring a blue book (yes they still have those) to class and we take from 20 to 30 minutes a week at the close of a class period( 30 minutes today), and give them an assignment to write about, as though they were writing a letter or a press report back home. They can make up identities, but the people and events have to be historic, as though they were there. Yes, they can use their books and notes.

Today's assignment was to write about one of two subjects. One, they had just returned from a Nazi rally in the mid 1930s--either in America or Germany, and were responding to a newspaper editorial calling for American isolationism. Two, they were writing a first person account of the Pearl Harbor attack. (Great ideas, huh? Baker's brilliant).

My students have to "adopt" a war correspondent and give a visual and verbal report later in class. Off limits: Hemingway, just because. And Ernie Pyle and Bill Mauldin. I get a whole class period on Pyle. Baker takes Mauldin.

First half of the semester is WWII. Second half is about Vietnam.

I've just finished grading my students first assignments. For the most part, these adults can write. I'll share a couple of excerpts soon. You'll be impressed.
3 comments:

Three books with others underway, have helped warm the days of a cold month, completing my 67th circumnavigation of the sun.

First was completing "Atlantic' by Simon Winchester. http://simonwinchester.com/ I'm more impressed than ever with this author, a journalist who was in an Argentine jail during the Falklands war. He's traveled the length and breadth of The Atlantic and the story is long, but compelling. My kind of book..history, but more than that, the story of people.

Other words I had to look up as I moved from December into the last half of the book: cartouches,  paten, ineluctable, godowns, barbicans, cis-altlantic, scutched, envoi, gibbet, execrable, fettle, furze, invidious, demersel, ablating, eiderdowned.

His tales of the horrors of the slave trade, the romanticism of piracy, the way the Atlantic changed naval warfare, the problems of pollution and global warming, and the science of it all, made the long journey--459 pages--worth the trip. 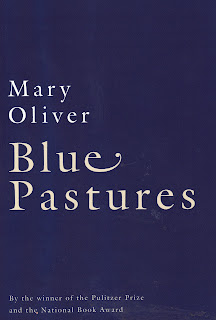 Second book was 122 pages, Mary Oliver "Blue Pastures," a Pulitizer Prize poet I'd never heard of, as a ignorant journalist I guess, writes of writing and studying Edna St. Vincent Millay. http://en.wikipedia.org/wiki/Mary_Oliver It's like she cleaned out her notebook and put a few things together. It stretches the mind.  If I hadn't visited Full Circle Bookstore in Oklahoma city one Friday, I'd never have found her.http://www.fullcirclebooks.com/

Oh, Blue pastures refers to the ocean. She lives at Provincetown, on Cape Cod. She also teaches at a college in Vermont. But since she doesn't have a degree--dropped our of Vassar--she couldn't teach at UCO. (No doctorate--so inferior). Words I had to look up: squamation, quahog, tautog. Still she had me with the chapter, "My friend Walt Whitman."

And the thoughts from these essays, like snippets from the notebooks she keeps and jots stuff down in:

Third book, read last night, has been around the house a while. It's Susan's copy of "About Alice" , 2006, by Calvin Trillin, about his late wife.  http://www.thenation.com/authors/calvin-trillinThis 70-some old page book by a star writer for The New Yorker, traces his partnership with his wife and her eventual death from cancer.

One quote: "One of the most negative words she could use in describing someone was 'passive.'"
No comments:

I don't collect much art from others, primarily because I can't afford it. Also, when you grow up in the home of an artist, you get very picky about what you consider valuable.

But in recent years, I've bought just a few pieces--a watercolor from an Indian on the portales at the Palace of the Governors in Santa Fe, a small oil at Paseo, and most notably, this sculpture, out of red cedar, of a red tailed hawk by Indian artist Earl Eder at the palace of the Governors. It is remarkable, 13 inches tall, with real turquoise embedded in its breast and on the tail, using the grain of the wood, with significant Indian icons and colors in he base, It stands on a black pedestal in our entryway. I paid $240 for this several years ago visiting my uncle Mike and bought it because it called to me, and Susan and I have a thing about hawks. This past summer I saw more of his work, and the  prices n similar work were already about $500. By the way, Eder, known more for his painting, was once a student of Mike's when Mike taught at the Indian Arts Institute in Santa Fe 30 and more years ago!

I never go to Santa Fe without walking respectfully down the portales at the 400 year old Palace of the Governors, looking at the jewelry and art--where Susan and I bought our wedding rings. then I go to La Fonda and site in the leather chairs in the lobby, where my Dad, Terrence Miller Clark,  sat, with his sketchbook, drawing board and one leg, back in the Depression.
1 comment:

I've recently had several smaller watercolors framed, getting ready for the April art show in the Donna Nigh Gallery at the Nigh University Center at UCO, along with some real artists. I'm fortunate to know the curator Zina Gelona, and also that she named the show  "Blue Skies," right is right up my alley.

More details later, but here are four of the small ones, now hanging on the walls at home. Excuse the reflections, can't help it.

What a great class--these "Blogging for Journalists" students  were full of ideas, and laughter, humor, and enthusiasm. Two class sessions already, and we've barely turned on the computers in the computer lab. They're having too much fun. Get ready for a wild ride and creativity and energy you can only envy. I will learn much.
These "kids"--and they're not kids-they're adults who will make the world a better place, inspire me to blog.
Next week--hi ho, hi ho, it's of to online we go, online we go.
Also posted on The Write Stuff.-- Follow our journey on http://okieprof.blogspot.com
No comments: 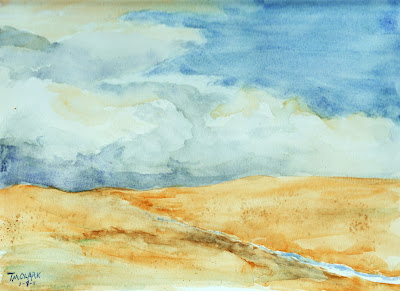 Cold front coming over the Oklahoma prairie...8 by 10 watercolor
No comments:

"Blogging block" wrote Jessica Miller-Merrill  today, she a guru of blogging and making a living with it in Oklahoma.

I haven't had so much block, though perhaps it is so, as I have just not wanted to sit down and write, at the end of the year after an emotionally exhausting fall, and a Capricorn birthday to start the new one off. 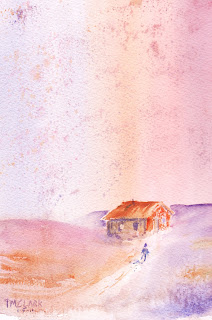 But my blogging friend Ronald Rabenold from Pennsylvania (Cultured Carbon County... http://culturedcarboncounty.blogspot.com )asked last night on Facebook if there might be a painting to go with the day. I hadn't stirred there either, but at least he got me out of the chair reading the many great congratulatory and sarcastic remarks from my friends, family, ex-students, and journalists who weighed in to wish me well. His is one of three blogs I check eagerly. Blog friend K. Lawson Gilbert--also from Pennsylvania, and her blog Old Mossy Moon most recently wrote about my watercolor card to her...High Lonesome. http://oldmossymoon.com. And there's Alan Bates of Tulsa, a fellow sojourner from New Mexico, an oil and gas guy, who writes Yogi's Den, http://crustygasguy.blogspot.com/

They put pressure on me just because they're so good. So up I got last night and painted something from within- It ain't great, but it's something, just like this post.

As I wrote yesterday, it's easy to feel marginal in this world at this age, especially in business or higher ed--as Larry McMurtry wrote in The Rhino Ranch, the concluding novel of five that started decades ago in The Last Picture show. http://www.bookreporter.com/authors/au-mcmurtry-larry.asp. After all, when you think about it, yesterday was just the completion of my insiginficant 67th

The pressure is on too, because I start teaching a class on blogging next Tuesday. I don't believe you should teach something if you can't do it, if you aren't doing it--the bane of many academics who have never done anything else and can't.

So here is "Birthday Road," a traveler heading toward sunrise or sunset (you choose), because the past is behind him/her. We all travel that road alone, but with help from those we've met and known. Facebook has become a friend for this, with so many comments from friends, family, ex-students (also friends), students, bloggers, et. al. as I've completed another circumnavigation of the sun.