I wonder what Jesus thought, as a  crowd gathered outside Jerusalem's walls to welcome him, shouting praises and waving palm fronds.
Did he smile? Or remain grim lipped, thinking about the ordeal before him in a few days?
I don't much care for glorified paintings of the  so-called "Triumphal" entry, as it is labeled in John's account.
He may have smiled at the cruel irony, or he may have managed to smile and nod in compassion at the adoration of the common people, the people he knew the religious authorities exploited without compassion. Did he wave, or speak, or just endure? We don't know.
After all, he was one of them, a dark-skinned Mideastern Jew with a big nose, weathered by lots of time outdoors in the desert sun.
All pictures of him show a white robe and white skin, smiling at the crowd. I doubt he had a white robe either...it would have been filthy with dust. It was probably brown and or a gray. One of his greatest pleasures was having his feet washed about all those dusty miles he walked.
Then again, he probably soaked in the moments with his calmness, with his self-assurance and integrity...knowing he'd need it all in just a few days.
Today's watercolor is rough, I intend that. A ragged rabbi, sitting on a little donkey, as people shout praises.
No comments: Links to this post

Metaphors.
I'm reading about the deadly Galveston hurricane of 1900, where human ineptitude and ignorance cost thousands of lives. 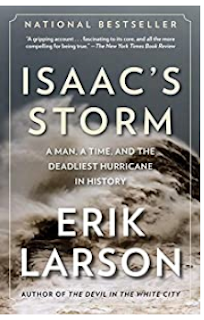 Isaac's Storm by Erik Larson details the disaster with meticulous research, understanding of science, and compelling narrative storytelling.
Though it's hard to put down, I have to stop and breathe once in a while because of the building  sense of inevitable doom, and anxiety.
In fact, it occurs to me that the anxiety is adding to my anxiety over our health hurricane, the pandemic.
Metaphors of a disaster, fitting today--ignorance, denying science, inept leadership, politics, individual heroes fighting odds against death.
That's where this little painting came from this afternoon, trying something new.
I bought a 22 x 30 sheet of Fabriano rough press paper from the estate of Paseo artist Regina Murphy last year. It's just been sitting in the closet since, until I got the courage and inspiration to experiment with an appropriate subject.
Reading about the hurricane prompted these thoughts and this little test watercolor. I'm not an expert on water, but my quick paintings of stormy water seem to work--witness the Viking ship from last week.
Taking a 5 x 7 sample of the paper, I painted quickly after wetting the entire surface. Few brushstrokes, few colors, and motion. Storms seem to be surging in me at the moment--more metaphors.
Rough paper (note the texture of that paper),  rough water.

(Next step, a larger effort. I bought the book from Edmond Best of Books. Larson's most recent book is the astounding The Splendid and the Vile, about Churchill in the Blitz.)

When we need some magic, and color

We all need some magic in these somber days, and mine arrived this morning.
I'm blessed to be able to paint watercolor birthday cards for my children and grandchildren, though through the years the requests tend to become more specific, and  demanding of my imagination and ability.
The main challenge however is remembering all the dates. Yes, I have them written down, and check them from time to time, but with eight grandchildren, they slip up on my aging memory. That's why I get gentle reminders, like phone calls or Facebook messages, which happened yesterday.
So today's first watercolor, is a card for a nine year old, with a request for unicorns.
I've painted them before, and they're fun to paint...magic creatures that bring magic to imagination and painting because they're colorful, and there are no rules, except they have to have a horn.
The magic of unicorns and color!

Why I paint barns--stories from The Depression

Why do I enjoy painting watercolors of barns?
Erle Thweatt Clark locked the doors, and picked up his paint brushes.
Have you ever painted buildings—not pictures--for a living? I have, but never thought too much about where that came from. Could be genetic, when I consider my family background.
The first summer I taught high school, two other teachers and I formed a painting crew in northwest Iowa, amid rolling hills covered with soybeans and corn, where farming is serious business. Because of the severe weather, and their European ethnic backgrounds, and their pride in their way of life, farmers on those prairies keep their barns, hog houses, sheds, and houses painted on a regular basis. Rare is the farm building that's not given a new paint job every four years.
That's what we did--renting scaffolding we transported in an old pickup truck. We were contract painters and kept busy all summer, going from one farm to the next.
We were good and we were fast. We would set the scaffolding up on one side of the two- and three-story farm houses early in the morning. We’d race the sun around, starting on the east and ending up on the north late in the day. We'd start at the top, with our tool boxes, paint and brushes, and come down the side of the house before moving to the next side.
We carried scrapers, hammers, nails, caulking guns, and we started under the eaves.
Worst part were the wasps that you had to fight off every day. As a joke, one friend stuck a straw in my ear  and yelled "Wasp!"
My reaction was immediate, and I jerked my arm around with my paintbrush full of white paint. It slapped him across the face, and almost knocked him off the scaffolding two stories above the ground. He didn't do that again.
Painting the towering barns and the  hog houses were the biggest ordeals.
For the barns, you’d have to haul a ladder to  the top scaffold,  precariously perch it there, climb and  stretch way up to get to the overhanging peak with your paint brush, several stories above ground, on guard for wasps..
For the hog houses,  we’d put the scaffolding up beside the building, but it usually had pig manure stacked up against the foundation, and the feet of the scaffolding would sink into the muck. The smell was awful. It attacked you and clung to your hair and skin. When you got home in the evening, you'd have to strip outside on the porch rather than take the smell in the house.
So what has all that got to do with Erle Thweatt Clark?
I learned much on one of my visits with the last Clark years ago--my uncle, the late Uncle Mike, in Santa Fe. My Dad was his oldest brother, and he’d tell stories about the Clarks I’d never heard.
I also learned the value of The Depression. The Clarks were the poorest of the poor in Comanche, Oklahoma. Five boys came out of that home, and rather than staying in the red-clay town--Terrence, Lewis, Rex, Mike, and Champ all escaped to various successful careers around the world. I never understood how some people would take such abject poverty and survive, rather than being trapped there for the rest of their lives.

Mike said they had no place to go but up, and that to get up, they all fled Comanche.
That's when he told about Erle T.--my grandfather--locking the doors and picking up his paintbrushes.
He owned a grocery store when The Depression hit, and soon his customers couldn't pay their bills. Finally giving up, Erle told everybody to come in and clean out the shelves--giving the food away to the hungry. Then he locked the door, and picked up his paints--going back to his original trade as a house painter.
All my life, I heard about the Clark boys--Terrence, Lewis, Rex, Mike, and Champ--coming home to help Grandma, Cuba Jon Miller Reasor, paint her house in Whitesboro, Texas.
Through the years, I've done my share too, even beyond those wasp-ridden, precarious barns and gagging hog houses.
Mike said a preacher told him once that in order to understand something, you had to get down and look up at the underside. He figured being the poorest people in a poor town put him underneath, looking up.
That helped prepare him for  successes, based on a compassion and understanding of humans in need. That, and house painting--which must be genetic. 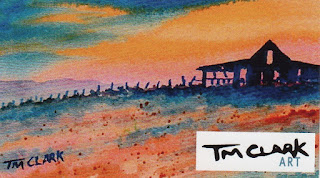 Maybe that’s why barns fascinate me. Now I settle for painting watercolors of them, though. Even my business card has one on it, and I've painted special ones for family members and friends.

(This has been revised from a newspaper column I wrote more than 20 years ago.)

Whimsy at a distance

New experiences birth new ideas, needs, which then begat new words, phrases.
Such it is with "social distancing," as we enter a new month of pandemic pandemonium.
But it occurred to me that "social distancing" isn't anything new, especially if you have lived in a rural area near local livestock, or even corporate pig farms, for instance. You don't want to live downwind, if you can help it.
Thus today's bit of whimsy in watercolor. Think about it.