Betrayed and divided, a free country and flag 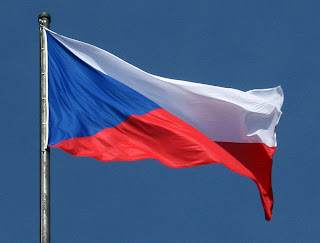 Among the readers of this blog are citizens of another country that has been invaded, betrayed, repeatedly occupied, and divided over the centuries, only fairly recently obtaining independence, and it also has an Oklahoma connection going back before statehood.
The Czech Republic, formerly known as Bohemia, goes back to the Ninth Century from a small duchy around Prague in the Moravian  Empire. In 1806 it became part of the Austrian empire, and became the core of the Republic of Czechoslovakia at the end of WWI. After 1933 it was the only democracy remaining in Europe, but the country was handed to Hitler by the 1938 Munich Agreement.
After WWII, with distrust of the west and gratitude to the Red Army the communists won rule and became a Communist ruled state in 1948. Trying to rebel in the Prague Spring of 1968, Warsaw Pact countries invaded and occupied it until the 1989 Velvet Revolution. In 1993 Czechoslovakia dissolved into two republics, the Czech and Slovak.

The Republic uses the same flag as the former Czechoslovakia, even though that was prohibited by the  in the 1993 separation. I think the Czechs are thumbing their noses at outsiders telling them what to do.
The first flag of Czechoslovakia was almost identical to Poland's, so the blue wedge was added in 1920. The Nazis banned it in 1939, but it was restored in 1945. The white comes from the coat of arms of Bohemia. It was used during the Prague Spring and Velvet Revolution as a symbol of unity. These are independent people. 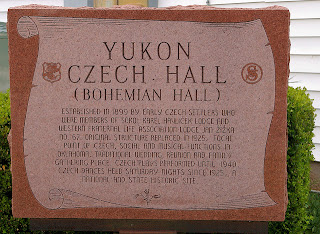 Oklahoma's Czech population dates from 1889 to about 1910, and many were "Sooners" from other states, arriving before the land run. In the 1910 Census Oklahoma counted more than 5,000 Czechs, including more than 1,500 foreign born. They ranked fourth among non-endlish speaking people in Oklahoma, after German, Hispanic and Italian groups. Unlike other Czech settlements in America,  however, most of Oklahoma's Czechs came from other states seeking free land, rather than from overseas. One of the main colonies was Yukon, which still has festival, as the Czech capital of Oklahoma.