June travels to Africa and Wyoming

When you're stalled, you need to travel, and I'm there now, staring at maps, dreaming. My reading, writing and painting have  withered this spring. Usually priding myself on at least a book a month, and averaging more than that, I looked back and realized I hadn't really read anything since February. There were four books read by the end of that short month, and while I'd started a couple, they also lay stalled.
Then Africa and Wyoming came calling with two books read this month. 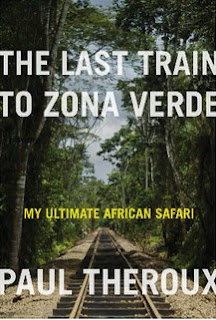 author, Paul Theroux. He's captivated me because he travels, he writes, and he prefers trains, and I've read his books about South American, Asian and African travel that way--The Old Patagonian Express, The Great Railway Bazaar, Dar Star Safari.
No wonder The Last Train to Zona Verde grabbed me, his "ultimate African safari" I finished it recently, and there's a hitch..he usually travels by beat up bus. He's my age, facing my issues of mortality, and traveling alone from South Africa up through sparsely settled Namibia and corrupt bereft Angola, and it's not a pleasant trip. Here's a side of truth and poverty you can't imagine, of rich government officials rolling in oil money while their people starve.
Theroux is an expert at telling the stories, and showing the lives of common people, not the stories of tourism brochures. A couple of phrases will give you the sense:
In Namibia, --"it seemed like a place fighting for survival"
In Angola, the nightmare of poverty and corruption and suffering from long wars, he notes wildlife is extinct.--"Angola is perhaps a lesson in wasted time."
Still, it was not depressing, but a journey you wanted to survive, with him, and find out how it ended. Here's a link of him discussing the book.  African book


But I needed more friendly territory, and I've found it every Sunday night on A&E channel, with the series, Longmire, set in Wyoming, but filmed in my beloved New Mexico, at places I easily identify.
I learned it was based on a series of books, written by Craig Johnson, and ordered the first of the books, The Cold Dish, a week ago. I've finished it, and feel so at home, with an author who knows the contemporary West.
The main character, a rural sheriff, isn't as handsome as the Gunsmoke Matt Dillon look-a-like who stars on TV, but the TV has the mood and action down straight, and the book is real in its portrayal of people, Western humor, cultures, weather and landscape.
Here are the links to the author and the TV show:
Craig Johnson Longmire TV
Interesting fact I learned writing this. The sheriff drinks Rainier beer. Headquarters of Mount Rainier National Park is at the town of Longmire. Ah, an author's mind.
One phrase that shows you the author really knows his subject, about aged pickup trucks parked around the Red Pony bar:


"in Wyoming, even pickup trucks have personal space."