Aspen to lift October spirits, and the muse


Seven days into October, and this is the first blog post and watercolor, following months of consistent writing and watercolors during this pandemic.

I don't know why the muse departed, though the history of this blog shows few October posts every year but the year I started, 2009.

Being out of town the first four days contributed, but after September's splurge of 16 posts (the most since 2014 and third highest overall) and 10 watercolors, the gas tank must have been dry. 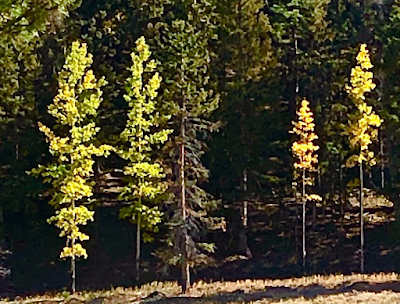 Only one watercolor has been completed so far, though there are three failures you'll never see.

Everybody tries to paint aspen, and I have before. This one inspired by a photograph on our Colorado trip as least got me started. And blogging again, hopefully more than the four each month for the past two years.

Aspen do that to you, and energize the muse. Here also is a photo of my Dad oil painting aspen long ago in New Mexico, which hangs in front of me as I type, and behind me when I paint.