The many pages of January 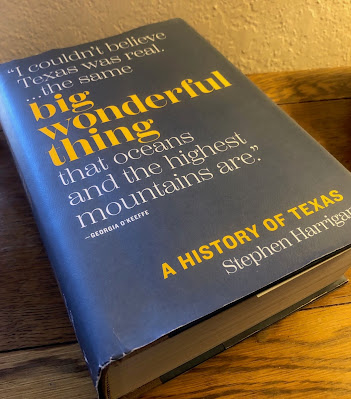 January was a two-book month for me, not counting the one I'm halfway through now.

The first was Stephen Harrigan's monumental history of Texas, "big wonderful thing," titled with a quote from Georgia O'Keefe when she taught at the university in Canyon. A Christmas gift from my daughter Dallas, I began it on Dec. 27 and finished it Jan. 19... all 850 plus pages of it, not counting footnotes, etc.

Plusses--You learn plenty about what most history books don't include. He devotes plenty of space to the darker sides of Texas history, treatment of Native Americans and racism against African Americans and the Spanish and Mexicans. And he makes sure to detail their contributions, including womens' roles. It begins  before the Spanish arrived and ends with the presidency of George W. Bush. And he's not afraid to be honest, wondering if the Alamo had become an unintended "death trap," and covering abuses by the Texas Rangers, for instance.

Weaknesses--I wish there were more maps. I had to get a highway map out for some of the stories. But I like maps and looking things up, so.  It is also somewhat of a political and economic (oil) history, going from governor to governor, which he calls the "tyranny" of chronology.  One omission I noted was no reference to the Ogallala Aquifer and center point irrigation, the key to the cotton economy of west Texas.

But it's well written, in many cases personal, and  I learned much. Dallas told me I should count it as three books for this year. 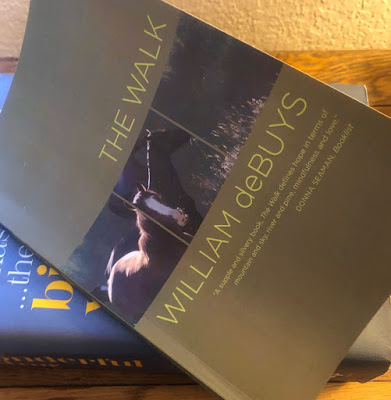 The second book took me three days, William deBuys' The Walk, 153 pages, three essays about his life and property in northern New Mexico village on a gravel road off the high road to Taos. It's a memoir, a landscape and more that I identified with in many ways, because of the landscape and his experiences.

I've read his other books about northern New Mexico, and his writing breathes that country. I'd just painted the Truchas Peaks, and his description of them describes my emotions when I see them. It was written in 2007 and I had to find it in a used book store online.

I'll close this with a quote, from the first essay, about a walk he takes every day: "...walking lubricates the connections of thought, loosens the bonds on the subconscious, and allows unexpected ideas and feelings to surface... ."