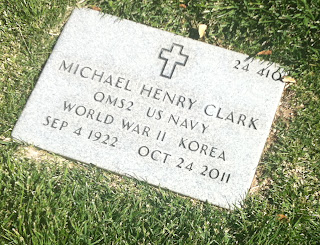 Ten years ago on this day before Veterans' Day, I officiated at the funeral of my uncle, Michael Henry Clark in the Santa Fe national Cemetery. A U.S. Navy color guard provided the ceremony for this combat veteran of WWII and Korea.
He was the last of the five living "Clark boys" from Comanche, OK, (Terrence, Louis, Rex, Mike and Champ)   my favorite uncle, and perhaps the closest brother to my father Terrence, the oldest. I took me a while to figure that out, since my middle name comes from him. "Llamarse como," he would say.I've written about him many times, and will not repeat, except to note this day and how many memories I have of him from when I was a kid, a teenager, and then in later years as adults, especially in the last 30 years. He died Oct. 24 in the Veterans' Home in Walsenburg, Colorado, and it took a few weeks to get things organized.

And the last photo is my sketch of the Manzano Mountains, southeast of Albuquerque, the day after the funeral on a somber Veterans' Day, as I looked out the window from the airport, waiting on a flight home. 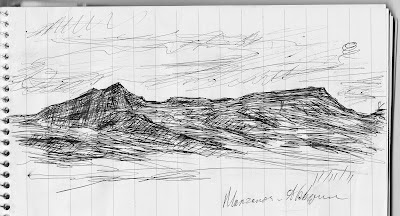 If you wish to see more photos and comments, just search "Mike" in search box above.