Veterans' stories--an adventure to and from Washington 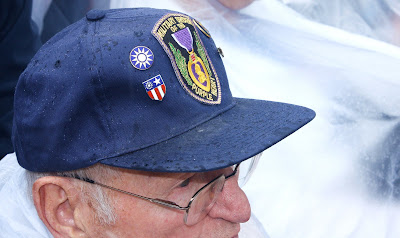 "Harry Truman was the best friend I've every had," a WWII veteran told me earlier this month.

He was sitting in the Reed Convention Center in Midwest City not too far from a captured Japanese flag, getting ready to go on the first Oklahoma Honor Flight.  "He dropped that bomb, and I got to come home."

Oh the stories I've heard on one of the best adventures I could have. Thanks to Mark Thomas and Oklahoma Press Association, I went along for the ride, taking photos and writing a story for Oklahoma's newspapers, May 17.

There were glitches--like the rain that forced everyone to wear ponchos and kept me from identifying all the veterans for their hometown newspapers, and my notepad was still wet three days later.

More of that and photos in the next post. Above is the photo of a Tulsa veteran, Mr. McCormick, the oldest member of the flight at 94. He volunteers three times a week at the Tulsa VA center. The hats tell such stories.

Here's the story OPA sent to member newspapers this past week.

Ninety-nine WWII vets from across left on a chartered jet by the dawn’s early light for a one-day whirlwind tour of war memorials in
They were guests of the inaugural Oklahoma Honor Flight organized by volunteers in to honor them.
They toured the WWII Memorial, the Marine statue of the flag raising at , and the changing of the guard at the Tomb of the Unknown Soldier.
The stories that should be told are endless. There were survivors of the of the Bulge and , former POWs, Purple Hearts and men who witnessed the flag raising on . Oldest vet along was a 94-year-old Tulsan.
Then they flew home, arriving at the Air National Guard hangars at at
Starting last fall, the group raised $95,000 to cover all expenses and it’s making plans for more flights, including one in October. Chairman Steve Coleman of said there were another 230 WWII vets on waiting lists.
There were about 200 people on the jet, as each veteran who needed help had an assigned guardian. In addition, Oklahoma Press Association was represented, and Channels 2 and 8 of and OETA.
Each of the vets wore a light blue T-shirt with the Honor Flight logos. Guardians had red T-shirts. All had blue caps with American flags.
The celebrations began the Sunday before the trip with a reception and ceremony at the in , attended by more than 500 people, including the vets.
The vets marched into the reception hall to the drum cadence of a military drum and the standing ovation of the crowd. The Governors Honor Guard presented the colors. Master of Ceremonies was Rep. Gary Banz of , a former government teacher who helped organize the events.
Each vet was presented a copy of the Constitution and Declaration of Independence. Then in came the school children of the Mid-Del district with commemorative coins for the vets, exchanging them for the copies of the American documents. The school kids had raised $25,000 of the total project cost.
Keynote speaker was Lt. Gen. Loren Reno, former commandant at Tinker AFB. The vets spent the night at the adjacent hotel and were up by , for the mile-long escorted bus convoy to the airport. Before leaving the hotel each bus passed under the arch formed by the fire truck ladders, a salute from the firemen.  Highway Patrol motorcycles and police cars, lights flashing in the darkness, took the buses to the airport where the vets were met by uniformed members of the Air National Guard.
They went through a makeshift security scan set up by and then the service men and women helped each vet up the stairs on the tarmac to the waiting jet.
The jet began moving as the sun came up, as the uniformed military stood at attention and saluted. Base fire trucks sprayed the plane with water.
Two and a half hours later the jet landed in and a group crew of volunteers was there to welcome them with cheers and smiles and help them onto buses for the ride to .
It was drizzling but it didn’t dampen the crowd getting off the buses. Provided rain slickers, and several of them in wheel chairs, they toured the WWII Memorial, congregating at the pillar and taking in the newest of ’s monument. The American flag, with the black POW-MIA flag flew nearby.
Honor flights began in about five years ago and the idea has spread. is the 31st state to have the program. So far, about 40,000 vets have made the trip. The priority is to get any WWII vet who is able to get on a jet to go see the memorials. Only about three million WWII vets are still alive. Those vets are in their 80s and 90s, and time is taking the toll that the Japanese and Germans didn’t in WWII. Eventually, the priority will shift to Korean vets and then .
Before they landed back in , each veteran answered “Mail Call,” with a packet of about a dozen letters. One was from the vet’s representative. The rest were from the school children, handwritten notes thanking them for their service. At the airport, the Air Force was waiting again to help them off the plane, and flag waving family members were also there.
The program began when a veteran, Al Willoughby, USAF-Ret., went to to take part in an Honor Flight. When he came home and  told the Midwest City Rotary about it, his fellow Rotarians started work, wanting a program for veterans.
For more information—www.oklahomahonorflights.org