A victim of a different kind of virus 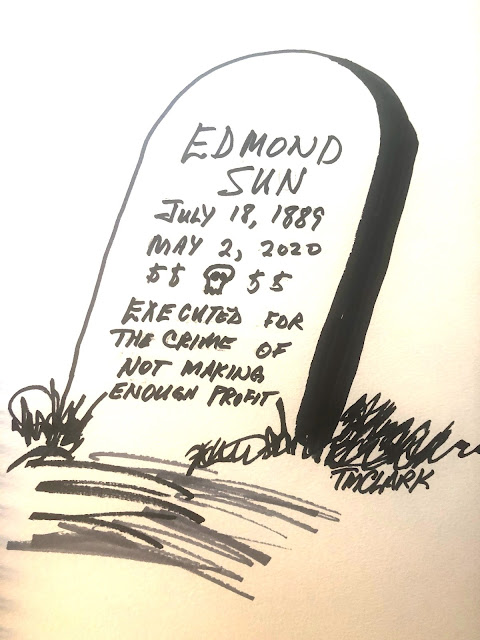 What follows, and today's art, is personal opinion.
Edmond's oldest business, The Edmond Sun, was "merged" today with the Norman Transcript. That's corporate speak for killing a local paper.
In this case, the corporation is cnhi, a conglomerate which owns many smaller newspapers, and this isn't the first one it has executed. The corporation won't sell papers that don't match its obscenely high  profit margin demands. It just shuts them down, and the Edmond Sun isn't the first. It probably won't be the last.
I know. Several years ago it did the same thing to my former newspaper, the Waurika News-Democrat. Local leaders tried to buy it, and cnhi said no.
People think that newspapers are dying, and usually blame the internet and the digital age. Some of that is accurate because papers have lost their cash cows, advertising. But the good ones are adjusting, changing, becoming hybrids.
Others though are not given the chance, especially those bought up by the large chains (now called "groups" in corporate speak) encountering debt load. Those corporations, their stockholders,  don't care about communities but just a bottom line, and paying off the debt.  Yes, there has to be profit, but rather than change with the times, or try to find local investors, it's easier to just take a tax write off and kill a vital part of the communities.
In small town  Oklahoma, we used to say a community's essentials were a school, a post office, a bank and a newspaper.
It's no accident that the words "common," "community" and "communication" are interrelated. It doesn't matter whether you agree or disagree with everything a newspaper prints, or the overall quality of journalism.
Those are the crimes of killing a newspaper...you have weakened the community by depriving it of essential information, and you have undermined the bedrock of a free democracy--informed citizens.
It's pretty obvious in these last few years that the one thing America can't afford--people questioning vaccines, science, equality, etc.-- is more uniformed, ignorant people.
So thus the Edmond Sun, while the pandemic effects on its ad revenue are mentioned as a factor, is really a victim of  a different kind of virus. Corporate greed at the expense of community. 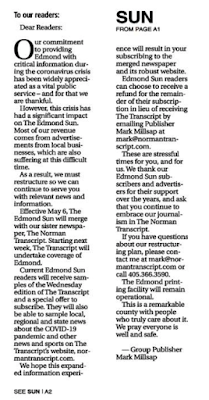