On the executioner's chopping block 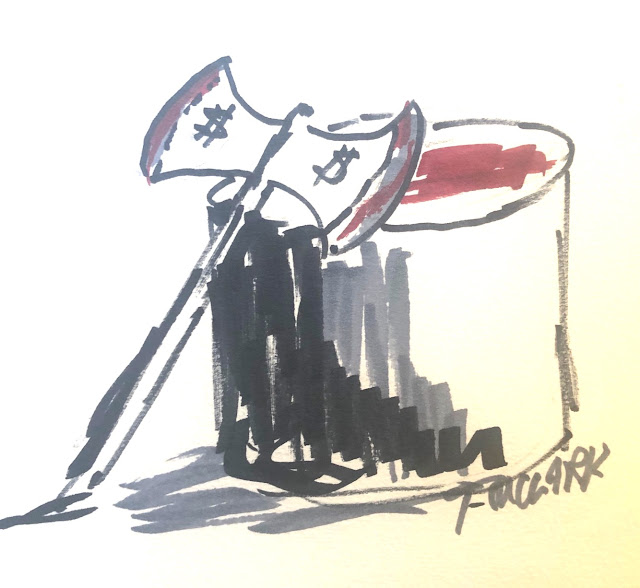 This post and today's art are my opinion.
"Names are news."
That was my guiding principle when I owned a community newspaper, because names, people, individuals  are the heart and soul of a community.
Yes, I wanted stories, and news, and scoops, but still, all of those were about people.
"No names, no news." 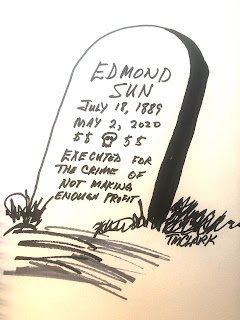 I chose the word "Executed" carefully in my last post about the death of the local paper, The Edmond Sun. Then other people chimed in about the official corporate speak announcement that failed to even mention condolences and gratitude to the abruptly unemployed staff. As one OKC journalist told me, "merging" with the Norman Transcript was "a stunt that won't work."
I've known for a while that the Sun's printing plant, that prints many other papers, including  UCO's student newspaper,  The Vista, was the real money maker, as the paper struggled to survive. But I know, and others do too, that the paper could have made it if it put community, and people first.
Having stewed on this over the weekend, I couldn't help but think of the medieval executioner getting ready to behead those out of favor with the rulers. To do the job, he had to not think of the victims as people, but just doing his job so he could keep his. Nice and impersonal. That's why The Edmond Sun is no more...it wasn't people, or community, it was just a job that wasn't profitable enough.
For the record, I believe 11 people joined Edmond's unemployed ranks Friday, in one fell swoop.
I only knew four of them, but that doesn't matter. They were all furloughed without pay, and with 30 days of partial health insurance coverage. They are applying for unemployment, but being furloughed here has no promise of being rehired.
Of the 11, five were in news, two in ads, and four in the office. I won't mention all the names, but three I knew more than just as acquaintances included  Oklahoma Journalism Hall of Fame member and award-winning journalist, James Coburn who had worked at the Sun since 1986.
Also among the casualties that I know are my friend Editor Mark Codner, and sports editor Aaron Albertson, and Kari Tompkins who handled digital and projects.
Executing The Sun is a disaster for Edmond, whether you subscribed or not, especially with no one left to cover local government or high school sports.  Who will the Norman Transcript have to cover Edmond?
For Edmond, "No names, no news."
But for each of those "furloughed," it's more than a disaster. It's personal, because they're names, they're people. They at least deserved to be thanked for their service.
So, here's a salute to each of you for your dedication through the years.  You deserved better, and certainly more respect.