This is my fourth editorial on the execution of the Edmond Sun.
Corporate parent cnhi abruptly executed Edmond's oldest business this month, blaming the virus for the action, but that was just an excuse for something probably planned for some time.
If it had cared about the community, it would have tried to sell it to concerned citizens. No chance. It needed a scapegoat to soften the demands for corporate profit at the expense of community and people. 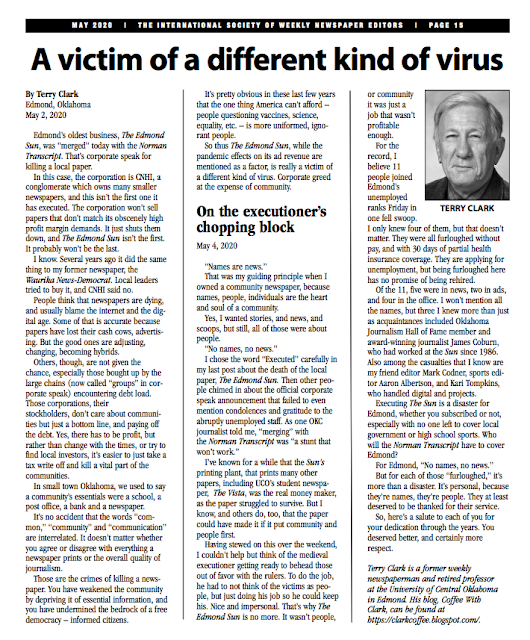 It also was not a solitary act. It killed nine other of its newspapers, some in Iowa, Alabama and elsewhere, same lame excuse, also including other  smoke screen "mergers,"
revealing the corporate PR speak behind the action. Nobody in Edmond wants to read about the "merged" Norman Transcript.

There's no doubt the virus has been a death knell for some struggling newspapers, and a challenge for many. In fact, at least 15 other  community papers around the country have met the same fate, most owned by corporations.
You can read about it in the story by the respected Poynter Institute, with the first issue of the Edmond Sun on their web page. Here's the link:  25 newsrooms gone, and counting, Though my headline is more accurate than theirs in our case... A different virus killed the Edmond Sun. 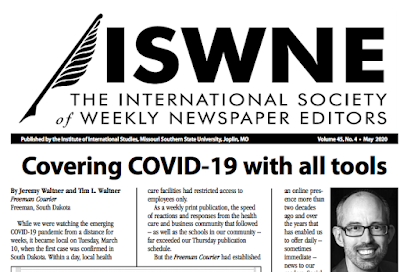 In the meantime, my editorials were picked up and have gone international in the May issue of the newsletter of the International Society of Weekly Newspaper Editors.
Its Executive Director, Dr. Chad Stebbins, of Missouri Southern State University in Joplin called and asked to run them. It is an international publication, with board members in Canada, UK, Australia and the U.S. I'm proud to be included in their issue on dealing with the virus.
The plight of local newspapers, that actually cover local news by attending city council, school boards, county commissioners and more, is essential to democracy, which means the loss of the Edmond Sun and others is a direct attack on our freedoms based on us as informed citizens.
About the only good thing to come out of this barrage of executions is an increased focus on the need for local journalism. Some experts are even calling for public newspapers--I'm not sure I agree with that, but the article is below, or non-profit groups, such as those trying to save The Baltimore Sun.
How important is this in America, and especially in a booming city of 100,000?
As my friend and colleague, Dr. Mark Hanebutt of the UCO Department of Mass Communication says about the dangers of a death of a newspaper, "It's not a taco stand that goes out of business."
Thus the national and international attention and concern about even the Edmond Sun.

+++
Here's the article on public newspapers:

Made by History
Perspective
The answer to the media industry’s woes? Publicly owned newspapers.
Newspapers must be for the people. It’s worth investing our tax dollars in them.
By Victor Pickard
Victor Pickard is an associate professor at the University of Pennsylvania’s Annenberg School for Communication where he co-directs the Media, Inequality & Change Center. He is the author of the recent book "Democracy Without Journalism?"

As the economic fallout from the coronavirus further decimates financially struggling small-town and city newspapers — still Americans’ main source for original local journalism — a desperate search is underway for alternative models. Analysts are looking around the world and back through history for examples of news media that don’t depend on advertising revenue — a collapsing business model that is unlikely to ever return. Ideas range from starting donor-funded nonprofit organizations to repurposing public broadcasting systems. But one intriguing experiment from American history has been almost entirely forgotten: the municipal newspaper.

During the Progressive era, public outrage grew over commercial excesses such as yellow journalism and propaganda — the “clickbait” and “fake news” of the early 20th century. A nonprofit, municipal-owned newspaper seemed like an idea whose time had come. George H. Dunlop, a “good government” progressive and former Hollywood mayor, conducted a successful petition, and Los Angeles became a test case for this experiment.

In a December 1911 vote, a majority supported the proposal to establish a taxpayer-funded paper, and the Los Angeles Municipal News launched in April 1912. With a government-guaranteed annual subsidy of $36,000 (worth nearly $1 million today), the city helped finance the distribution of up to 60,000 copies. To ensure accountability, the mayor appointed a commission of three citizen volunteers to govern the paper. They served four-year terms but were subject to recall by voters at any time. Dunlop, the newspaper’s original architect, was chosen as one of the commissioners.

The newspaper sought to be nonpartisan and democratic by guaranteeing an equal amount of weekly column space to any political party that received more than 3 percent of the vote, including the Democratic, Republican, Socialist and Socialist Labor parties. Newspaper carriers delivered the weekly paper, which was usually eight to 12 pages, free of charge to homes. People could also subscribe via mail for one penny.

The inaugural editorial of this “people’s newspaper” declared itself “the first municipal newspaper in the world … owned by the people of the community in which it is printed.” It was described as “created by the people, for the people, and built for them under their control. It is in this sense unique.” The newspaper’s masthead read, simply and boldly: “A Newspaper Owned by the People.”

The newspaper’s editor and its 10 staffers covered local happenings such as government operations, the proceedings of various agencies and public school events. To maintain political neutrality, the paper provided equal space to arguments for or against specific city ordinances proposed to voters. Although the paper’s emphasis was on high-quality, fact-based information about civic issues and responsibilities, reporters also covered popular culture, including music, fashion and new products coming into the market.

The paper offered free classified and help-wanted ads, as well as other important information, but it banned ads camouflaged as news stories — what we would call “native advertising” today. However, it did accept commercial ads from local businesses. This revenue helped defray costs but didn’t generate enough money for the paper’s expansion as originally hoped.

Nonetheless, Dunlop and his fellow reformers believed that public newspapers offered the last best hope for democracy, reflecting the growing conviction among social critics that a commercial press could never rise above profit pressures and class allegiances to serve democratic imperatives.

Given the national scourge of sensationalistic and unreliable news, press reformers across the country watched the Los Angeles experiment closely. One article published in La Follette’s weekly magazine noted the public’s “growing realization” that “the commercialization of the great daily newspapers of the country presents one of the most serious problems connected with the movement toward democracy.” Therefore, it read, “the career of this newspaper owned by the taxpayers will be watched with interest everywhere.”

Despite such initial fanfare and high hopes from the local community and beyond, the experiment was ultimately short-lived. Feeling threatened by the rise of a popular public alternative, local commercial newspapers, including the Los Angeles Times, banded together to oppose the initiative, charging that the paper presented unfair competition in the marketplace and was an illegitimate expenditure of public money. This opposition may have combined with some public complaints that the paper’s distribution, especially early on, was not always reliable.

When the question of public funding for the newspaper appeared on the ballot again in 1913 — written in a confusing, ambiguous way, according to some people — voters rejected it in a low-turnout election. Many supporters believed the paper fell victim to a misinformation campaign fueled by commercial publishers’ opposition. The editor blamed an “antagonism, carefully and consistently fostered by the private press and its representatives” that impeded progress and discouraged erstwhile supporters.

One post-mortem report described the paper as a “successful experiment” brought down by “active determined opposition” from the city’s local business community. The article concluded that more such newspapers were needed to fight political corruption with “civic service” and “impartial information” similar to that provided by schools and libraries.

Toward the end of its final run, the paper announced, at the top of its front page, “THE MUNICIPAL NEWSPAPER IDEA CANNOT BE KILLED.” The paper urged reformers in other cities to continue agitating for public newspapers dedicated to providing diverse views on government policies and local affairs. Dunlop hoped the idea — that citizens deserved a public-service newspaper that wasn’t simply the “private property of some millionaire” — would live on.

With the triumph of the commercial newspaper, this nonprofit experiment has receded into the past, forgotten by all save for a smattering of scholars over the years. Meanwhile, structural alternatives to profit-driven news outlets in the United States have remained relatively underfunded and pushed to the margins over the past century. Nonetheless, a publicly owned municipal newspaper that informs a community about local affairs remains a viable alternative to the dying commercial model.

Indeed, with local journalism’s importance to democracy more evident and more at risk than ever before, it may be time to reconsider this model. Local news outlets cover stories and offer community-level information — potentially lifesaving during a global pandemic — that national outlets will never provide. Study after study shows that losing local journalism doesn’t just come with political costs such as decreased voting and civic engagement, municipalities also pay significant economic costs when they lack a community news outlet that uncovers corruption and waste.

Instead of building something from scratch, municipalities could expand existing city information sites, build on public infrastructure or outright purchase their local paper. Given cities’ budget shortfalls, a federally funded network of municipal newspapers might be more feasible. With the imminent collapse of many local news outlets — what’s been called a “media extinction event” — today’s journalism crisis presents a rare opportunity to introduce a “public option” to towns and cities across the country. The municipal newspaper is an idea whose time has returned.