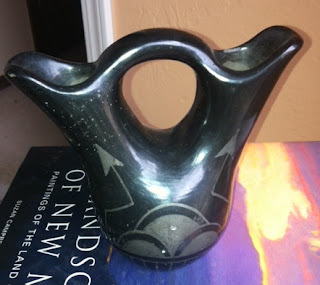 It's no longer the Cowboy Hall of Fame, though most folks still call the National Cowboy and Western Heritage Museum just that. We're fortunate... it's just "down the street" from us actually, a nice back road drive of a few miles south. I don't go there enough, but did yesterday and walked into a surprise. The exhibit "Pueblo to Pueblo--The Legacy of Southwest Indian Pottery shows all kinds of pottery from several  different pueblos in New Mexico and the Hopi in Arizona. It's here through April 6 from the Kansas City Museum. You can't take photos, but I've included a photo from my collection, via Uncle Mike. This is a small"wedding vase" from Santa Clara. The wide variety of pottery forms and the decorations is an adventure in art and imagination. You should go see this exhibit soon. www.nationalcowboymuseum.org/
Part of the exhibition has included demonstrations and talks, and I barely got there in time for the second to last one. Today is the last such. 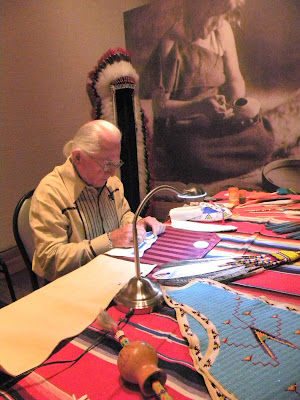 Renny Reeves, now of Oklahoma City, Lakota and Ottawa artist whose name is also Keche Weewaquahn was doing bead work. It is astounding to me the amount of patience and time that goes into such work, whether bead work or pottery. That's where Native Americans are more civilized that we  are...they have a different culture and sense of  time--non linear. I told Renny, "You don't make art like this with a wrist watch on." I've approached it occasionally when painting and I've talked to others who agree, time ceases to exist or matter. 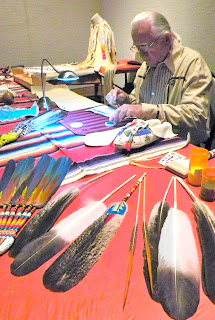 Mr. Reeves does this for a living, making Plains Indian style feather bonnets, fans and moccasins and all other kinds of things too. Behind him you can see a bonnet he's made, and a poster of the pottery exhgibit. He's working on a bead covered ceremonial vest. The front part is in the foreground. His email is harlirenny@cox.net.
Exhibits like this add to the riches of the museum, which is packed with great art about the west, from Remington to Russell and before and since, Native American art, displays on western movie actors and movies, firearms, barbed wire, the U.S. Army in the west, hunting, western hats, frontier towns, rodeo, and more. Also current is an exhibit of sculptures of Indians done from Bodmer and Catlin watercolors. 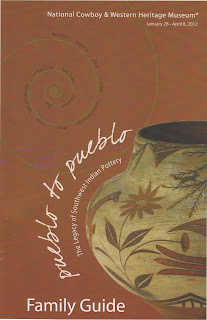