Turning pages of the West and other travels

I try to read at least a book a month, but this spring has been slow, but that changed this last week, after a visit to Full Circle Bookstore a week ago to hear  Craig Johnson. He's the  best-selling author of the Longmire modern Western mystery series which has been a hit on A&E TV.
Before reading a little from his latest book about the Wyoming sheriff, "Any Other Name," he told story after humorous story, about living in Wyoming near the Montana border, reading his books in rural libraries, supporting independent book stores, affecting  sales of Rainier beer, (Walt Longmire's favorite), and working with the actors in the TV series, the only one I watch. 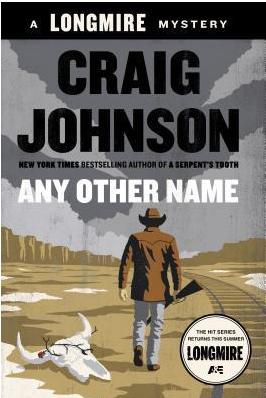 I've read three of his previous books, but what first hooked me was the TV show. While set in Wyoming, it's filmed in northern New Mexico, and I watch it for the drama and familiar scenery--I think I've been everywhere the show is filmed.
Obviously I bought the book, got it autographed, and finished it within a few days, my fourth book this year. Fortunately, the new TV season of the show starts Monday. The actor Robert Taylor resembles James Arness in "Gunsmoke," but this show is  more realistic and set in present day. It's a good show, different enough from the books to make you want to read them too.
The books move quickly, gaining speed near the climaxes. I especially like his use of Wyoming weather  in the plots. What really stands out--I wanted to ask him about it at Full Circle but didn't want to bog down the large audience with my interests--Johnson inserts a lot of Native American beliefs and what we gringos would call "mysticism." But if you've lived in the West and known those cultures, you know there's a spirituality there that transcends whites' poor ideas of reality.
Favorite line from the new book is "She stood there like an unfinished phrase." Wow.

Johnson is a big cowboy who knows the rural West and its people, and the realistic characters people his books.  I wish I'd had a recorder for all his stories, but one quote stood out during the night: "I like spending time with Walt." 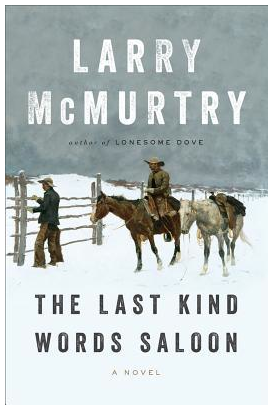 I also bought Larry McMurtry's new novel, the "Last Kind Words Saloon," writing about the legends of Wyatt Earp and Doc Holiday, beginning in West Texas and leading up to the Gunfight at the OK Corral.
He's writing about the legends, not the facts, of the closing of the West, and included are Quanah Parker, Charlie Goodnight, Bill Cody and others in the brief book. I liked the first three fourths of the book...it's funny and tragic, and McMurtry is a master of characterization and funny dialog. The end of the book disappointed me though, but it's in line with McMurtry de-mythologizing the West. There are no heroes here--just people with problems who legend has made bigger than life. So his was the fifth book this year. Two previous books this spring were for my Sunday night "soul-detox" group I've written about, spiritual traveling. Most recently was Paulo Coelho's "The Alchemist," a symbolic fable of wisdom about  a young sheepherder on life's journey in the Sahara. It's been translated into more than 20 languages. And before that was "The Twenty-One Skills of Spiritual Intelligence" by Cindy Wigglesworth.
What is interesting to me is that Wigglesworth's is the only non-fiction book I've read this year, a reversal of my preference for non-fiction. First book back in January, was Mark Twain's "Adventures of Huckleberry Finn."