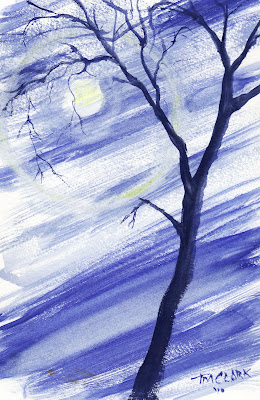 Ring around the moon in Comanche, Oklahoma

Louis was the second of five boys born dirt poor in the red clay town of Comanche, Oklahoma almost a century ago. Louis and Champ married beautiful Catholic women, and thus I have a lot of cousins on my dad Terrence's side, and many more on Mom's. I expect that all of Louis' children and Champ's children also heard that term, "ring around the moon."

I wonder how far back that goes, and what other memories are triggered by it?

It's sleeting outside as I paint this...the high ice clouds coming in before the ice storm, bare winter branches silhouetted against the blue-black sky and speeding white clouds illuminated by the moon. I imagine it was like this long ago, in Comanche.