Steps to a foggy morning 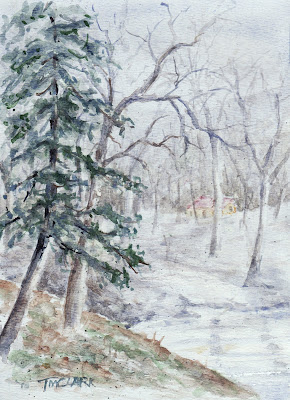 The view from my window where I paint...

... at least in my imagination today. There's a single pine tree I can see the edge of in the neighbor's yard and bare branches everywhere. Fog just demands photography or painting or poetry, perchance? The grays, the mysteries, the moods, the silence, the romance, the softening of details all provoke the imagination and memories. Friend and photographer Zach Nash caught the magic of fog in downtown Oklahoma City on his fantastic blog earlier this week:

Now that I think about it, I'm reminded of Carl Sandburg's poem, "Fog":

The fog comes
on little cat feet.
It sits looking
over harbor and city
on silent haunches
and then moves on.

Today's fog has moved on, and the sun is casting shadows of the bare branches, and adding color to the world.

But if it weren't for the fog, I wouldn't have painted this morning. This is the first painting I'm really pleased about since my birthday. It incorporates much of what I've learned from Cletus Smith and experience over the past few years. I just realized that included is my iconic--yes, perhaps trademark--cabin and retreat in the silent wilderness of forest and mountains (yes, you can barely see the mountains in the background because of the fog).

Steps to a foggy morning:

Step one--outline sketch of main elements, including closest trees... a few lines only of diagonals, thinking where to put cabin and main trees. Then use soft eraser to almost erase the marks so they don't show up through the paint--which is transparent. Step two--Using a wide brush with lots of water apply soft gray wash over entire sheet. Let dry. Stronger gray wash from top of mountains down to where water and corner triangle are. Let dry. Step three--use slightly dam brush to lift out lighter areas for the cabin and trunks so they will show up against deeper gray.

Step four--use a darker gray, with bare hint of Umber to paint in distant trees behind house and across the paper. Note: throughout the painting, if anything is too intense, I used a wad of toilet paper (unused ;-0 ) to blot and soften the lines to keep the fog effect. Step five--I use a narrow brush, called a rigger, to add distant, vague trees, just a few lines, including a couple in front of where cabin will be. Step six--start working on closer trees with a slightly larger brush and just a little darker gray--including the trees whose trunks I'd lifted out against the gray earlier. Shifting back to the rigger, continue the bare branches in random movements into the sky, getting smaller and fainter.

Step seven--start work on the two closest trees, making them darker where needed for contrast against background , using a little more burnt umber to make them warmer and appear closer. Leave blank spots where the pine needles can overlap. Let dry. Step eight--While that's drying, use a few brush strokes of burnt umber and burnt sienna with a touch of sap green to paint the ground in the foreground, making it warmer so it appears to be closer, and leaving some light areas to indicate uneven forest floor. I added a few strokes to indicte a few blades of grass, including two protruding into the lake, which were just taking the end of the brush handle to scrape the wet paint, moving upward quickly.Step nine--work on the shore line, especially the dark area behind the two main trees, making it darker to push the trees forward. Then add some slight strokes of faint paint on the rest of the ground to indicate slope. Step ten--wet a brush with Raw umber, and splatter small dots of the paint onto the front triangle to add texture to the ground, and blurred with my fingers. Step eleven--mix Sap green, Ultramarine blue and a littleIndigo to start painting the pine needles and branches. I put them in faintly at first because I was afraid I'd ruin the painting. If it didn't work, I could blot them out and just make it a bare-branched tree. Then I added color and contrast a little at a time to the needles. Step twelve--Using Raw sienna I painted the walls of the cabin, and using a little Alarizin crimson mixed with other stuff on the palette to gray it down, I added the roof...blotting several times to soften it. Using a rigger I added dots for the door and windows. The roof is supposed to be a rusted tin roof, and by having a hint of red, it grabs your eye to offset the strong pine tree. Red has the longest wave length of color light, so that's why we see it first, and it serves as a center of focus.

Step thirteen--I wet the lake area with clear water, and added some gray-blue the area closest to the bottom to give depth (no pun intended) to the foreground, with a couple of stokes closer to land to indicate still water. Then with a rigger and gray paint, I added the reflections of the two trees, making sure to soften the edges.

Step fourteen--Final stages: I took some indigo and darkened the pine tree trunk and branches under the leaves, and then a little stronger brown gray to strengthen the brush and trees behind the cabin and other closer trunks to make them come forward. I darkened a few of the closer branches. The process includes several trips to the mirror to judge its progress. Then I signed it. 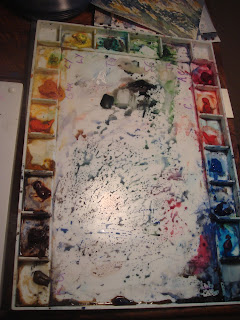 My palette--15" x 10" plastic John Pike. The paint comes in tubes like oils, and then mixed in the large middle area.. Colors used in this painting--Raw umber, Burnt umber, Burnt sienna,Raw sienna, Alarizin crimson, sap green, Indigo and Ultramarine blue. I probalby use more Ultramarine than any other color. All gray is a mix of the blue and umbers. It's all an illusion of 3-D on a flat piece of paper. And it's fun when it goes right. The key is composition, contrast, and being willing to mess with reality.

I learned all this from Cletus, a talented artist whose watercolors take my breath away. He's a good friend with a great sense of humor, and an excellent teacher. Most watercolor artists use very few colors because they can mix almost anything with those few. And as the famous watercolor artist Ron Ranson told me at a workshop in New Mexico two years ago--he only uses about seven colors--"These are my friends. I know what they'll do."

I've never gone through this progress before...interesting what an old dog can learn, isn't it?
I hope you've enjoyed this. I've learned from writing it.