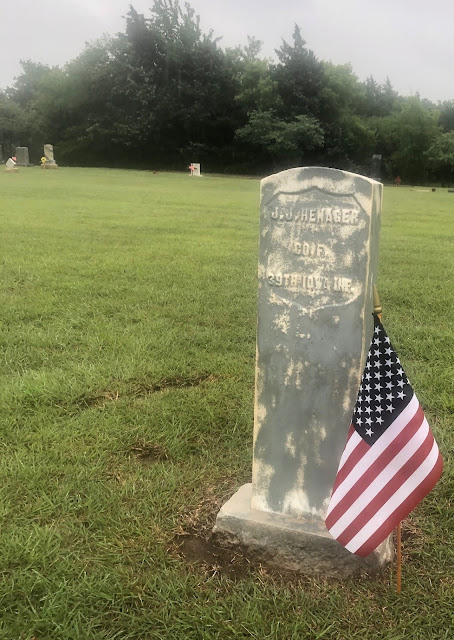 One of my favorite cemeteries is Oakwood, at the end of 15th Street in Edmond, just before you get to Arcadia Lake.

It's a Territorial cemetery, with graves from the 1890s, and families still care for it, with burials continuing today.

I go out there often to think, to imagine the stories, many untold for three  main reasons. There are numerous veterans' graves, dating from Civil War vets to the present. There are numerous infant graves, attesting to the harsh life of early days. In addition, there are many other unique stones. I've written and photographed and painted there many times. You can search Oakwood on this blog and seem some of those earlier efforts.

I went out there today, in the rain, for the mood, and took this photo...a marker of untold stories.

I took this photo today because it caught my mood. J.J. Henager, who served in Company F, in the 39th Iowa Infantry, fighting to preserve the Union in the Civil War.

Surviving, he somehow, at some time, came to Oklahoma Territory probably to homestead. I wish there were dates, and I knew more. I'm thankful the cemetery  volunteers put flags on all the veteran graves today.

His Infantry record, from Wikipedia:

The 39th Iowa Infantry was organized at Des Moines and Davenport, Iowa and mustered in for three years of Federal service on November 24, 1862.

If you know me, you know I love walking through cemeteries, especially attracted to veterans graves, adorned with American flags on days like this.

There are so many untold stories, so many memories in such places.

Here's a salute to those who served, real patriots who put their lives, not their empty words,  on the line for our freedoms.

The moods of rain

Rain brings many moods, and memories of as many songs to me. And the Bible is full of references to life-giving rain.

As the skies clouded up again today, with more rain promised, several of them ran though my head, some romantic,  some nostalgic, a few happy, and many more sad.

When you grow up in the arid southwest, you always notice rain, and look forward to the building clouds and rain of the early fall monsoon season. Those too bring memories and moods.

Much of the country has had too much or too little rain this year. Here in Oklahoma, on the eastern Great Plains, I'm thankful for the cooler temperatures, and abundant rainfall...and the multiple memories.

Today's little watercolor, out of response to those memories and moods.

How time slips away


"Ain't it funny how time slips away" is one of my favorite songs, especially sung by Willie Nelson.

"It's been a long, long time" pretty well sums up life's journey, more so as I get older, and the emotion of times past, of living, of loss seem to especially fit his voice.

Many things bring it to my mind these days, especially for some reason on Sundays. Today, just sitting on the back porch, slight drizzle, moving clouds, bird song,  changing  greenery..."as time slips away." I also thought of Thomas Wolfe's novel, "Of Time and the River."

What about today will you remember? Did you enjoy the present moments?

Today's semi-abstract watercolor has been in my imagination for a while, and it just seemed to pour out, "as time slips away.

Help from on high


When you need inspiration,  "Go to Work!" yell the experts.

The muse shows up when you work, even when you're in the doldrums, when you're in a valley. Don't actually work, just play around, and see what happens.

"Put butt to chair, pen to paper, and just write" has been an axiom for writers and journalists. I know of many times in writing, I would get the nut graph, and then a lead, and somehow, by the end of the article, the appropriate  conclusion would somehow just show up. I think that's the muse, help from "on high."

Creative people in every area probably have similar experiences. (Aside--I irreverently wonder if that happened when Yahweh created the universe, not knowing exactly how it would go and turn out? Picture the Spirit saying, "Hmmm, let's try this next and see where it goes." No wonder "He" rested on the seventh day.)

I do know it is true in painting, especially watercolor, the medium you want to have some control over, but can't control. And, when you're in the valley, and nothing seems to inspire, or there's no energy, the answer often is, "Just play around," for help from on high.

And for me, I think of the Psalmist, who asked the same question "...where does my help come from?" with

Sort of my mantra too, and even in Oklahoma, as a child of New Mexico and the West, I can remember, dream,  and imagine, the mountains are inside me.

Thus today's playtime watercolor, seeking help from on high, in more ways that one.


While much of the country is drowned in drought, we're in the midst of the season of green.

Abundant rainfall and cool weather has filled streams and rivers, ponds and lakes.

Though summer is not here yet to remind me of a favorite song, "The Green Leaves of Summer," I find peace in the abundant foliage on bushes, undergrowth, and especially trees.

Seems like a call for today's little play-time watercolor.

The lure of islands

When you see an island, what is the reaction?

Probably, a question, a lure, to somehow get there and find what is on it, to explore, discover.

I think of Hemingway's Islands in the Stream, or Dolly Parton and Kenny Rogers'  song, by the same title. Then there is William James' quote about we being islands in the sea separate on the surface but connected deep, along with John Donne's poem, "No Man is an Island."

Don't forget Tom Sawyer and Huck Finn, spending the nights on an island in the Mississippi River so they could hide. Or Robert Graves canoeing down the Brazos in Goodbye to a River, camping on one overnight. And, do we not all dream of the magic islands of the South Pacific or getting away to a secluded beach in the Caribbean? 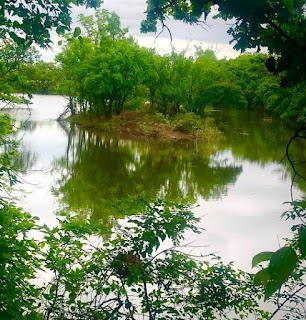 Those thoughts came to me yesterday, walking in Martin Park, seeing this little island in the middle of the lake.

Thus today's little watercolor. It's been a long month of little creative activity for me, and that walk and this island, brought peace and an urge. It's a little rough but what I felt viewing it. Part of an island's lure.


When it rains on the Great Plains, you can see it coming, hear and feel it when it hits, and smell it as the clouds recede across the far horizons, leaving the landscape soaked.

The storms usually build in the afternoon and evenings, when the atmosphere and light and color is most dramatic.

On the plains in Oklahoma and Texas and elsewhere, except when the weather turns violent, rain is always welcome. Clouds on the horizon bring hope and action to a sometimes monotonous landscape.

Today's watercolor comes from a memory of those times, and a study in complementary colors.

Drama on the caprock


When you drive across the Texas panhandle the sweeping horizons of the Llano Estacado may seem flat, but there is always drama, either in the skies or in the changing landscapes.

Especially in the morning or evening when you approach the caprock  and canyons from any direction, there is beauty and a sense of space, a sense of being alone.

The word "caprock" describes a geological feature of West Texas and Eastern New Mexico at the edge of the plains. You have to live in out there to really know the word and what it means, a caliche cap on underlying the Llano. The same feature shows up along the canyons and gullies throughout those plains. To me, they're always inspiring, something I hope to capture the essence of. Beauty and variety in a landscape many ignore.

Today's little watercolor is a study for a larger painting, I hope. I've been struggling with composition on this one, after several pencil value sketches that have constantly changed. I am not sure I'm there yet, but a small study gives me freedom and ideas for possibilities. 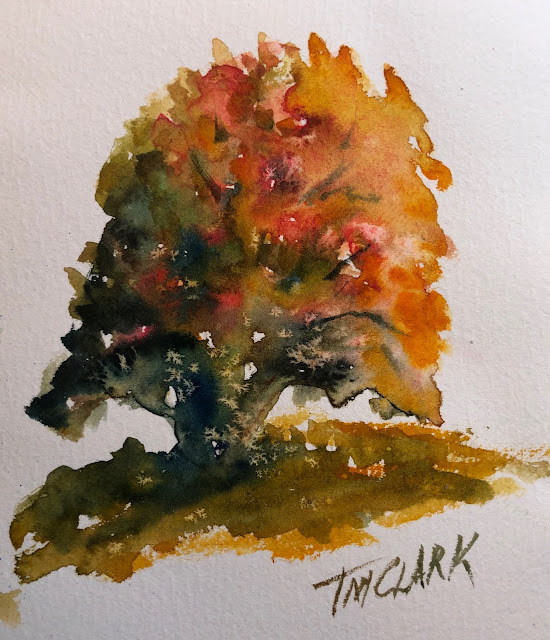 If I have a favorite tree, it is the cottonwood. 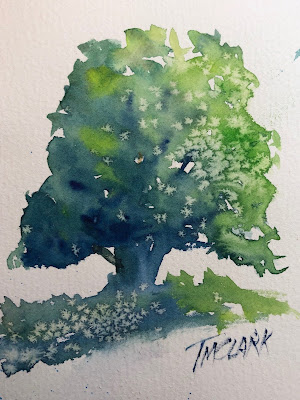 No, I don't have to put up with its cottonwood in the springtime, or the allergies, but to me, it bespeaks the color and abundance of water in New Mexico.

My favorite, tree, which I've tried to paint many times, is at the corner of Alameda and Paseo de Peralta, in Santa Fe.

So to, pushing and hoping for the muse, here is my Cottonwood series... 5 x 7 watercolors.

Spring, early fall at its most brilliant, before the snow falls, and in January plus a painting of my favorite tree. 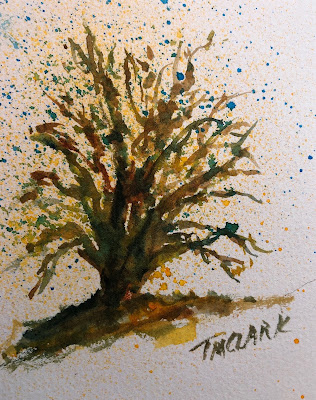 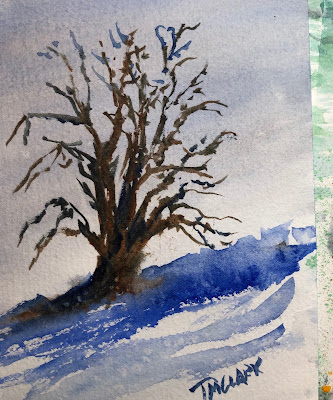