The saga of Dwain the Dragonfly--"Gossamer" life

Yesterday:
Meet Dwain, the dragonfly. He may be on his last legs, but is still alive as his wings occasionally flutter. 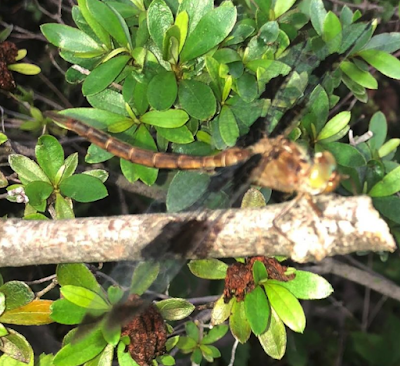 Susan saw one of the neighborhood cats pawing at him in the grass in your yard. I went out and the cat left, so I found a small branch, put it under him till he grabbed it. Then I lifted him up near the top of our azalea out of cat way.
Thirty minutes later, he hadn't moved but his tail was up, and the wings still.
Thirty minutes later, the sun came out and his wings were fluttering. I moved him into the sunlight, and thirty minutes later chased off the cat again. With more rain coming and the sun behind another cloud, I moved Dwain into the interior of the bush for protection.
He's probably in critical condition, or shock. Clark the dragonfly whisperer.
Today:
"Gossamer " life. I went out this morning, expecting Dwain to not have survived the night, but Dwain the dragonfly lives!
After last night's rain and wind left him upside down on the branch, inside the azalea, wet and motionless. I figured I'd just prolonged his suffering after being pounced on by the cat yesterday. 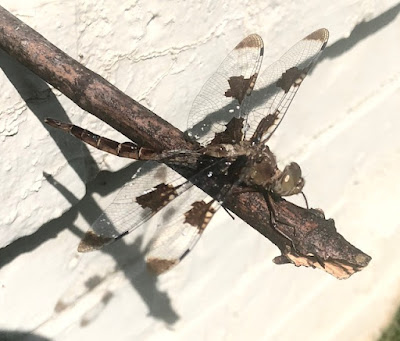 But I pulled the branch out and put him in the sun. Water glistened off of him.
His wings started fluttering. I thought it was the wind, but cupped my hands around him and they still moved.
So I took a photo up close, and watched. I was getting ready to take a video of the wings--you can see through them, but they weren't torn--so delicate and transparent.
Now I know what the word "gossamer"  really is, how appropriate.
Then before I could, the sun dried him out even more, and guess what?

He flew off, gossamer wings into the blue sky!
Dwain and Clark, 1. Cat, 0.
P.S. I looked it up...dragon flies live only about seven months. Are you enjoying today? 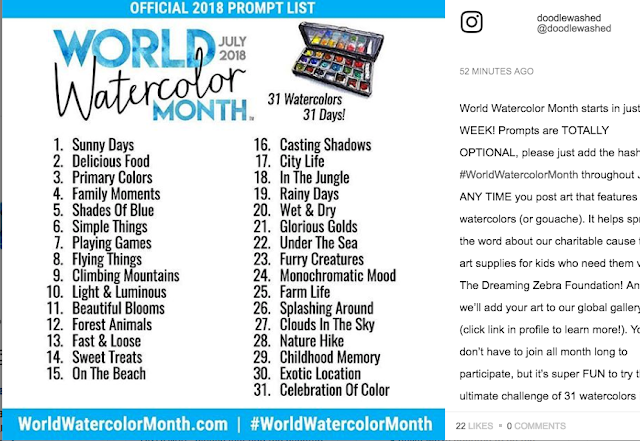 Last year I did one a day, including many of my "Barn again" series. This year? These subject prompts will be a challenge indeed.
No comments:

Late May and June--three watercolor commissions, all 8 by 10s.
Then four  inspired by the weather, though my cloud painting is suffering, 5 by 7s and 8 by 10s.
Two from imagination, a unicorn again, and a cabin, again.
This blog has avoided politics, as does my painting, but nothing has upset and depressed me more in the past years than the sTrumpet administration's gestapo splitting families and caging children. People who are cruel to children will be cruel to anyone and anything, without remorse or conscience. Thus the painting at the end, painting what I feel.
I'm glad the July daily challenge begins with the prompt, "Sunny Days."
Commissions: 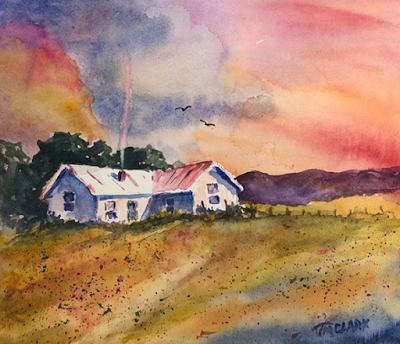 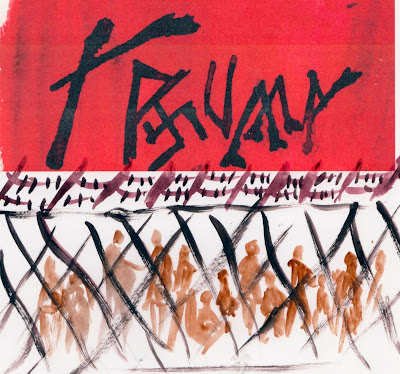 Next month is World Watercolor Month with the challenge for one a day. Accepted.
But May and June have been a blur of obligations, schedules with painting squeezed in, some completed at In Your Eye Gallery in Paseo. Most have been posted on Instagram, instead of this blog. 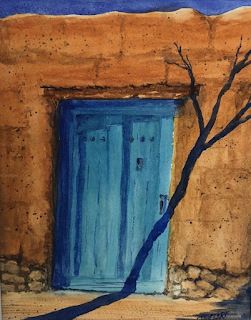 Time for an update, more for the record than repetition.
Most recent were yesterday's 8 by 10s, representational and abstract of a turquoise doorway and adobe, "Doorway to/for My Dreams." 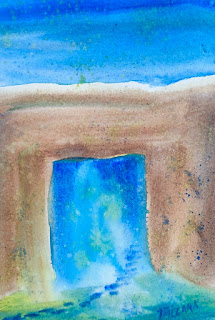 I've noticed that several of my works, completed at the gallery and relatively small at 5 x 7s, have to do with mortality.
Four bison, "Sunset," Alone," "Into the Sunset," (8 x 10), "You're Getting Too Close," and two travelers and a harvest, "End of Day," "Into the Storm," "Harvest Nightmare." 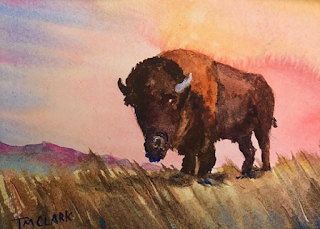 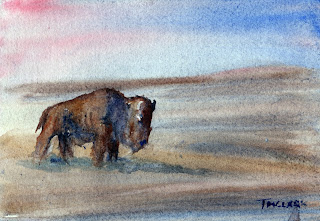 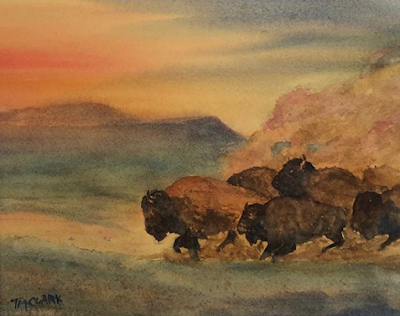 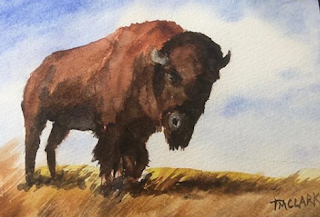 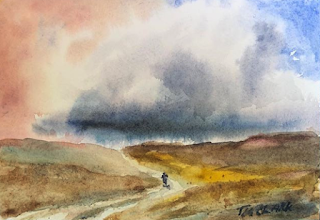 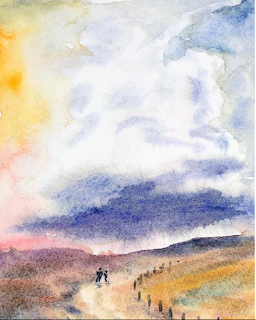 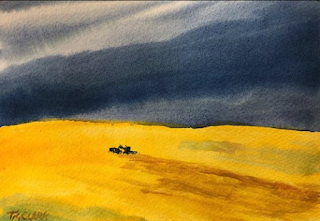 So much to learn, so little I know, so little time.
Saturday morning, back porch art school, and today's lesson.
After viewing the magnificent art at the 46th Prix de West show yesterday at the National Cowboy and Western Heritage Museum, I left inspired, uplifted, confounded, thankful, and more than a little humbled.
I can't fathom the techniques of some of the watercolors I saw, much less the talent. And the same goes for the oils, drawings and sculptures.
So it's back to the back porch this morning to read more of Edgar A. Whitney, trying to understand, to grasp  and eventually apply what this great icon and teacher had to say.
And then it's time to try a painting, today's lesson. Not bad, but so far to go. And don't miss the Prix de West...I'll be going back to study even more.
No comments:

Turning the pages of the first half of 2018

What I've read so far this year: 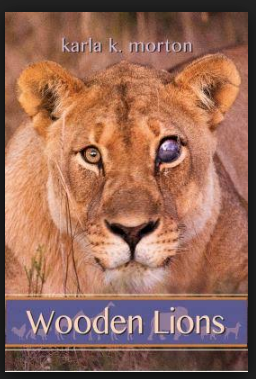 Next: Atlas of the Lost World, Travels in Ice Age America, by Craig Childs.

In the news recently, one fourth of Americans haven't read a book in a year. How shallow and provincial in thought and character.
1 comment:

You'll laugh, you'll cry, you'll get hungry.
I read a lot of books, usually more that 20 a year, but this year has been slow, as I've changed along with this blog. I usually post about the books I've read as the year goes along, but not this year. 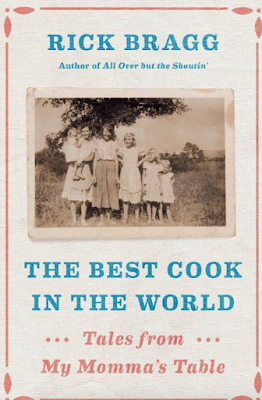 There's only been about six or seven so far, and the most recent one...well, you read the headline.
When I saw that Rick Bragg had a new book out, I ordered it immediately. (From Best of Books in Edmond) You should too...but don't get a digital version, and don't buy from the big boys. This book deserves to be purchased from an independent bookstore, any independent bookstore. Why? Read the book and you'll know.
Just as the book is about real people and real food and real storytelling, it deserves a real bookstore and real ink and paper.
Bragg, a former Pulitzer Prize-winning journalist, is a master storyteller and writer.
His writing and storytelling are as delicious as his Momma's recipes.
His mother Margaret Bragg, now in her 90s, learned to cook  from stories and watching...no cookbook-still; no measuring cups or thermometers, no recipes. More than 70,000 meals in 80 years.


"Good stuff always has a story," she says.

Each of the 35 chapters of the book, and don't dare skip the prologue, come with stories of generations of the  poor Alabama family, beginning in the 1920s or before and coming up through last year. Also seasoned with black and white photos of family members.
The stories all come with recipes of real Southern cooking, as he gets his mother to estimate ingredients and portions, not just the ingredients-"What you will need"--but directions on cooking.
Fried chicken--one that recently had its neck wrung. . Biscuits and gravy.  Cobbler. Ham and beans. Pies. Cornbread. Crappie. Fresh vegetables.
The list and stories go on and on. And most of them have to do with iron skillets and lots of lard or bacon grease.
Me, this weekend, I'm going to try the recipe for stewed summer squash and sweet onions from near the end of the book. We have the vegetables from the farmer's market--and yes, you need a slice of bacon.
Opening line: "Since she was eleven years old, even if all she had to work with was neck bones, peppergrass, or poke salad, she put good food on a plate."
Buy the book. Bragg will make you laugh, cry, get hungry, and enjoy great storytelling and writing.
I'll let you know how my squash and onions turn out. And yes, all in all, it is the best book I've read in years.

Out of hibernation, and God in the back yard

Two months without a new posting, first time in nine years, since the blog was born.
Dead or hibernating?
Hibernating I hope, like the bear I sometimes am.
"You need to write," chastises my brother Jerry.
Been busy, and writing takes a lot of time, I replied.
My wife Susan chimed in, "Time to write."
The reasons, or excuses,  I've not written? Occupied with watercolor business at In Your Eye Studio & Gallery in Paseo, and painting, and adjusting mentally and socially to full retirement.
In fact, I'm writing now while I wait for a first wash on a painting to dry.
But the thoughts and subjects for writing have been there, building, like the clouds soaring into humid skies this June, that I'm trying to paint.
Those of you who follow this blog know that it has changed over the years, toward less writing to more artwork. That's all right because I have changed too.
But, OK, it is time to write more, reflecting those changes. Too many stories to tell, thoughts to share. What I hope to do is blog about two or three times a week, on a schedule, because I'm terrible at scheduling and an expert at procrastinating.
**
I love sitting on the back porch in the cool or the morning with coffee, just listening to the birds. No TV or phone noise, no humming of lawnmowers yet.
I barely move so the birds will visit the feeder--Cardinals, Jays, Wrens, Titmice, Chickadees, Downy woodpeckers.  Above the tree branches, a Mississippi Kite soars. An occasional red tail hawk wafts through the branches
The Psalm came to mind this past week:

My concept of God has changed with me. No longer the Old Testament Yahweh, or even the church-taught versions of an judgmental god threatening damnation, while singing about love,  and strict obedience to some sectarian set of rules.
Readings from Catholic seers, Thomas Merton and Richard Rohr, and in Native American beliefs have awakened me in ways, though the wisdom and ingrained beliefs of the ages in the Old and New Testaments still affect my thinking.
If you believe in an omni-present God, as taught by our churches, then God is everywhere, in all things, is all things--all life, all creation. Does not that make everything holy? If you believe in eternal life in this god, is that not also for all creation, since god is in all creation?
So my idea of god, has had to change; it's now "Eternity."
Sitting on the back porch, listening to the birds sing, I realized, by sitting still, I'm listening to god through the birds. Eternity is in the backyard.
**
This blog has not been about religion or politics, and it won't be.
Next post will be about the best book I've read in years, "The Best Cook in the World," by Rick Bragg.
Now, since writing takes so much time, it's back to painting.