The drama of far distances and spacious skies of the arid Southwest overwhelms the senses with an infinity of colors and light--and the sense of size.
To me, rain storms are among the most dramatic, both as a contrast to the arid land and air, and because they dominate the wide open spaces, clouds always changing, always moving, and rain falling transparently across the landscapes.
The Navajo consider torrential rain from thunderstorms male rains and slow moving clouds and gentle rains and mist  female.
I'm captivated by those rains, their shapes and colors. Today's painting, a study for a larger piece, is another of my desert series, also an unintended work in complementary colors.
No comments:


Favorite color is blue, and I find I use more blue paint than any other.

And there are so many hues.  I ran across these quotes today, and had to follow Gauguin's advice. So here it is, courtesy all the blues I have,  Ultramarine, Cobalt, Prussian, Phalo, Cerulean, Teal  and Turquoise speaking to me.

"If you see a tree as blue, then make it blue."

"I never get tired of the blue sky."

"The sky was a midnight-blue, like warm, deep, blue water, and the moon seemed to lie on it like a water-lily, floating forward with an invisible current."

― Willa Cather, 'Sunrise On The Prairie.'

Adobe and Blues, for OVAC

Every year the Oklahoma Visual Arts Coalition hosts its 12 x 12 fundraiser  and this is the third year in a row I'm proud to be one of 175 participating artists for the Sept. 16 auction.

Artists offer art measuring no more than 12" x 12"  for bidding, starting at $200 and OVAC gets a percentage to help fund its many activities.

I returned to a favorite subject, the colors of the Southwest, always multi-hued, so here it is, soon to be delivered to OVAC.

“The desert wears… a veil of mystery. Motionless and silent it evokes in us an elusive hint of something unknown, unknowable, about to be revealed. Since the desert does not act, it seems to be waiting — but waiting for what?”

When you grow up in the southwest, a high arid land, the desert, the light, the colors, the wide open spaces, the varied landscapes all become a part of you.

The land of visible time, of rugged geology beckons the mysteries, the stories of creations and creatures, triggering the imagination, the questions, the inspirations.

So it is with me  when I view the prominent volcanic neck, Cabezon, jutting from the land in northwest New Mexico in the usually dry Rio Puerco valley. Spanish for "pig's head," it can only be reached on unpaved roads, though you can see it from many miles away frommany directions.

Near its base is the decaying adobe ghost town of the same name.I've been there once, long ago, getting almost lost on sandy roads trying to get to Chaco Canyon.

I've tried several times to paint it, without satisfaction; years ago my Dad did an oil of the dusty ghost down that is long lost, but lives in my memory. 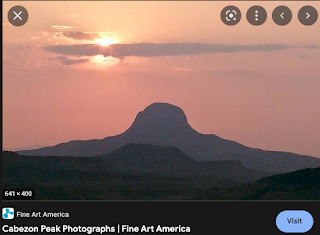 It draws me like a magnet still, and I keep a folder of photos on the computer, and scan the subject often. This week I found one I hadn't seem before, and it inspired this week's painting, in my desert series. Credit:  Look Visions in fineartamerica.com.

I wanted to emphasize the dramatic sale and the mystery and mood. I probably prefer their purplish view, but mine shows the dusty almost sunset view, typical of the arid land. It towers more than 1,000 feet from its base to the top at 7,786 feet, the stark skeleton of a large volcanic field that erupted,  along with Mt. Taylor, more than 1.5 million years ago.

“What draws us into the desert is the search for something intimate in the remote.” --Ed Abbey

When you live in or near the deserts, you know about grit...sand, rock, wind, and people...and landscapes and views. Raw.

Today's little painting, a study for something larger, reflects that grit in the strong palette knife textures. Probably not smooth enough to attract a buyer, but still, part of my desert series.

Navajo Country, with a hogan? Monument Valley? New Mexico, or out of my imagination?  The brilliant colors of the skies, the country, the dramatic landforms, where humans are small and ephemeral, and the world is  textured, like our lives, real.