Just so you know, part of the expectations of trying to be an artist...
Then there's the "Artist Statement," which goes on Adelante's website, www.adelantegallery.com/ etc., and will be posted on the Gallery wall. Sketch by Susan. 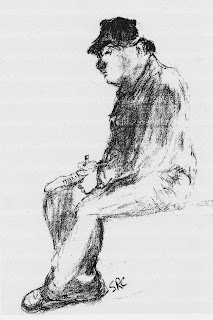 Out here there’s the sky. I grew up in New Mexico and have lived most of my life on the Great Plains, the land of far horizons and dramatic skies. Willa Cather wrote, “Elsewhere the sky is the roof the world, but here the earth was the floor of the sky.”
It’s alive, the source of light and color and weather and life. Dynamic. Challenging. Fluid in an arid land.
In transparent watercolor, I find all that vibrancy in mountains, deserts, mesas, prairies, adobes, and skies. My experience as journalist and photographer influences all my work.
Clark has studied watercolor with Cletus Smith of Oklahoma City, Ron Ranson at Taos, Don Nice at Quartz Mountain, Connie Seaborn of Oklahoma City. He has exhibited and sold watercolors in Oklahoma City and Santa Fe.
He’s a professor of journalism at the University of Central Oklahoma and a journalist. His award-winning blog, Coffee with Clark, features watercolors, photography and writing. http://clarkcoffee.blogspot.com
1 comment:

Hard to believe...some older, mostly new, all framed, exhibited at Adelante! Gallery in Paseo for First Friday and throughout the month of September as the featured "artist." From 5" by 7" up, prices at $150 up. Thanks Cynthia Wolfe, Gallery owner, and many others too.
I spent today hanging them. This is what you will see on the right when you come in the door. (Y'all come!) 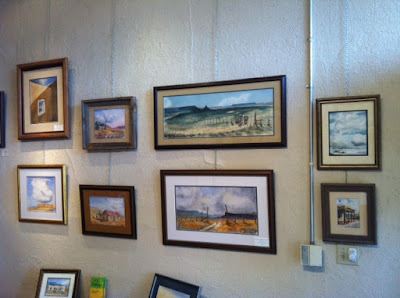 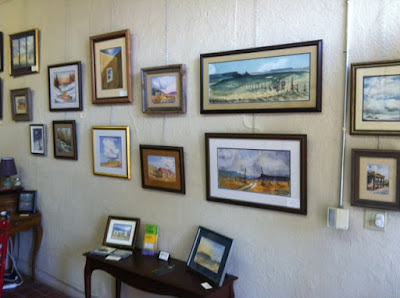 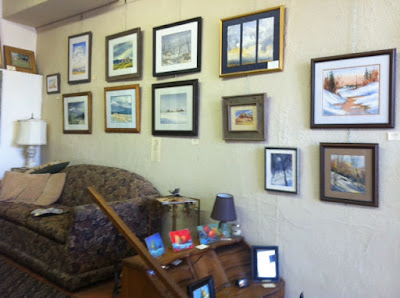 Here's what you'll see on the left as you come in the door. 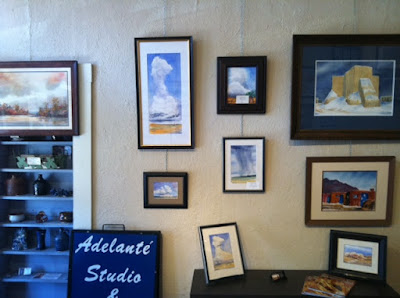 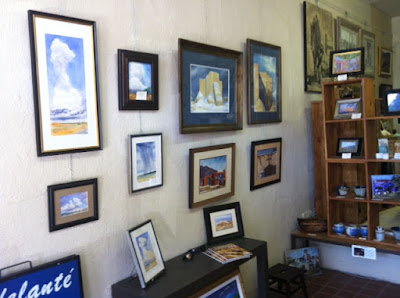 Adelante is the purple building , second from left:

Or looking down the hill, between the sand and light blue galleries.

The front door, with one of my cloud paintings in the window. It's open soon. Y'all come! 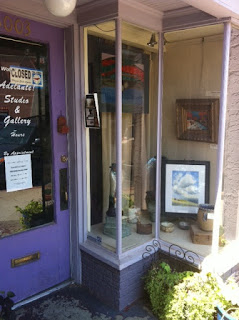 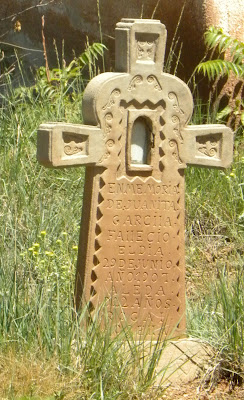 Old cemeteries captivate me, and the little campo santo at the small church at Canoncito at Apache Canyon, where the old Santa Fe Trail emerged from Glorieta Pass is one of them. Most people zoom by on I-25 on their 75 mph way to Santa Fe just around the bend, ignoring the exit and perhaps only seeing the church out of the corner of their eye, if at all.

Huddled by the old Las Vegas highway, it is one of those places you have to want to go, and on my recent spiritual return to Santa Fe, it seemed an appropriate delay to the traffic of Santa Fe. And here I found wonderful old headstones, and weathered wooden crosses, with inscriptions in Spanish. Most of the burials seem to have been before New Mexico statehood, and only about 40 years after the Civil War battle was fought nearby. Oh the stories that could be told.  Life was much slower then. Stopping here slowed me down. 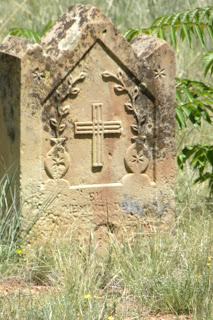 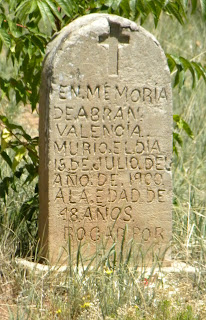 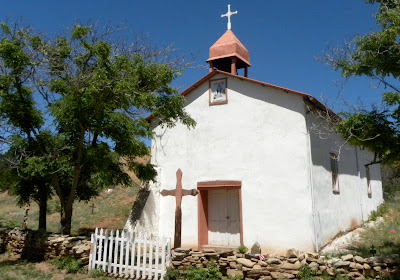 
I saw this monster south of Amarillo Wednesday night after attending church with my daughter, son in law and of course three grandchildren. What's amazing to me is that after a trip to the clouds and spirit of New Mexico--as necessary to my life as seawater to tidal pools--this is my first painting. Susan saw the photo--earlier today on facebook--and ooh'd and ahh'd. Love in its many forms moves spirits. I knew when I took it.

For those of you experienced in the Llano--the Staked Plains--forgive me for adding a little relief to the flat horizon. See the facebook posting for reference. I will do better.
No comments:

I spent part of today driving up old US 66 toward Tulsa, (Arcadia, Luther, Wellston, Chandler, Davenport and Stroud) looking for photos...it was greener than this in some places, and more trees, with cattle huddled under them in the shade, but I saw several farm ponds drying up.
2 comments:

Beating the heat in Edmond

How do you paint heat, I asked this week...maybe this comes close...a dried up Oklahoma riverbed, distant thunderhead, the country shriveling under the dust and sun
No comments:

Poetry with footnotes? A review

That's how Oklahoma historian and writer begins his new poetry book, Hanging Men, about the vigilante hangings in Ada in 1909. It's one of the latest publications of Mongrel Empire Press www.mongrelempirepress.org that Okie poet and publisher Jeanetta Calhoun Mish enriches our state's literature with.

Abandon your stereotypes of  poetry books.  In 41 poems,  The author tells the story of the hangings in poetry, but footnotes the events. Then he includes a historical afterword of explanation. The only other poetry I can think of  based on unembellished historical facts might be Benet's John Brown's Body. Kipling's Charge of The Light Brigade is too romantic. Turner, a PhD, member of the Oklahoma Historians Hall of Fame, and retired history dean at East Central in Ada must have spent hours working on this book...the amount of research and depth involved staggers the imagination and world of creativity.

Back to the book. After the first poem sets the tone of the book, the poet takes you on a narrative journey leading up to the hanging of the four men, and then almost to the present with its consequences.

Favorite lines:
"the line between law and outlaw, blurred
as subject to change as the prairie winds."
--Pontotoc County, Chickasaw Nation, 1890

"B.B. Burrell had died inside
before he ever felt the rope."
--Four Men Hanging

"The poet carried scars
from his hard, hard life
shuffling from one place to another... ."
--Scarred Poet: 1968

The poet includes the perspective of much more recent events in Ada, including questionable practices by local DAs in convicting men while seeking the death penalty. Those stories were told in Robert Mayer's The Dreams of Ada, and John Grisham's The Innocent Man. You can tell the author is a historian. He criticizes Grisham's book: "marred by careless research and reporting with little attention to the nuances and contradictions in the story he told." And Turner writes  about the culture and consequences of the lynchings and the more recent events in the afterword.

In one poem, Hangman,  he writes:
"There's an oft-quote jest in these parts
about giving me a fair trial and
then hanging the guilty bastards.
..."leave one DA's life and career
hanging, in the wind."
(and this was footnoted)

It's not dry history, and the author notes his imagination at work on fictional characters in the poems. There is a sense of humor and irony sprinkled throughout the book.  You'll find it in his poem, "Historians"

The closing lines:
"The historian knew wrong when he saw it
but was thankful for the luxury of professional expectations
--suspended judgment and such--
leaving him among the hanging men."
(also footnoted)

This is the third book of Mongrel's TwinTerritories series of historical perspective on Oklahoma, and typical of Mish's pioneering work. I don't like the overused word "groundbreaking," but this 64-page volume is a unique journey into the Oklahoma mind. You can order it on the Mongrel website.
2 comments: