When you can see time


Time--One of the many reasons I love the Southwest.

Out here,  the geology of this aging earth is always visible in dramatic landforms, constantly changing skies, light, colors and weather.

So many stories laid one on top of the  other like the strata of sedimentary rocks, evidence of deep time. So many unanswered questions, like the mysteries of geologic unconformaties and fossils, gaps in knowledge of millions of years, all in front of our eyes.

So many lessons of how recent we are, how small we are, how brief our lives. Out here  you can see forever,  into the universe and its daily reminders of time deeper than the rocks, the moon, the sun, the stars.

Thus today's little painting, part of what may be my desert series, with a multi-layered title, especially as another man-made month ends, and man-made time "zones" mean nothing--where you can see time.

When a moon rises

We're halfway between full moons according to our calendar, though ancients measured time by the phases of the moon.

The full moon influences more than just ocean tides, but those of moods, memories and more.

"We will survive," Calm before Storm, and Ukraine's colors


Finished. My largest painting, "Calm Before the Storm."

While it was in progress I noticed it featured the colors of Ukraine, battling the monstrous Russian invasion.

So my title has changed, "We will Survive."

As most have on the Great Plains of America, through hardship, drought and violent weather.

This will be available in two weeks at  my @InYourEyeStudio&Gallery and in time for the @Paseo Arts District  Arts Festival May 28-30.

Dedicated to the real patriots, not with words, but fighting with their lives in Ukraine. Death to tyrants, here and everywhere.

The Challenge of Skies and Paint--story

Almost. I've been staring at the blank canvas for a few months now, trying to get the nerve to challenge myself to try something that large.

Finally, the weather improved enough to set the 24 by 30 canvas up on the easel on the back porch. I'd recently sold an 11 x 14 of clouds moving across the Great Plains, from a photo I'd taken a few years ago.

I didn't want to try to copy that painting, because that just adds to the stress, and I'm uptight enough. But the idea and the colors seemed appropriate for a large canvas.

The painting is almost done, but like any journalist with time, I've learned its best to sleep on a project before putting the finishing touches on it, making final touch ups (editing). It's taken several days to get to this point.

Today I tackled the foreground, which always intimidates me the most, and where I have ruined other paintings.  I picked up the brushes, mixed some colors and just started working.

So here it is,  first titled "Angry Skies,"  but now I think "Before the Storm," tells a better story. And here are the stages, the reference photo, and the previous painting. 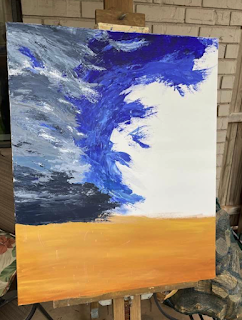 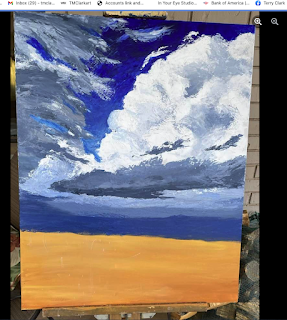 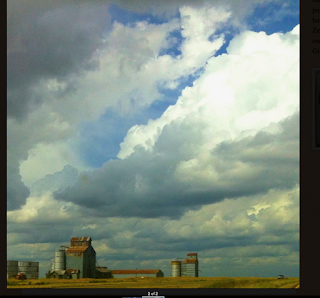 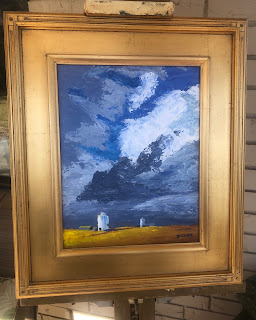 White unto Harvest the colors of Ukraine

“Behold, the fields are white unto harvest,” and then suddenly colors of freedom loving #Ukraine, blues and yellows only just happened. Life to freedom. Death to tyrants and their USA toadies.

Palette knives, on gallery wrapped canvas. Soon available at In Your Eye Studio and Gallery in Paseo Arts District

Here's  my display at Prime Time Travel  during downtown Edmond Vibes First Thursdays. Had fun, met lots of people, and finished a little watercolor. So thankful to be inside on such a windy day.

Next month, May 7, outside on the sidewalk at Citizens Bank! 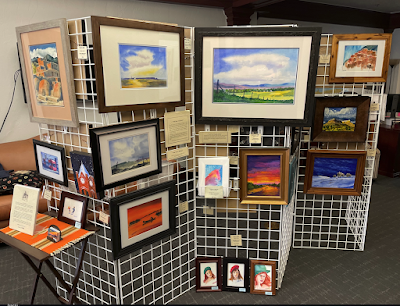 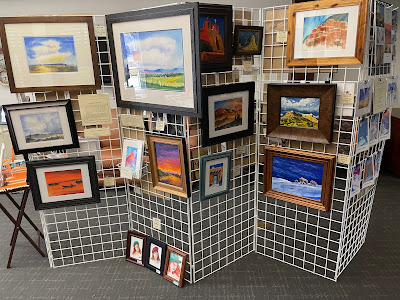 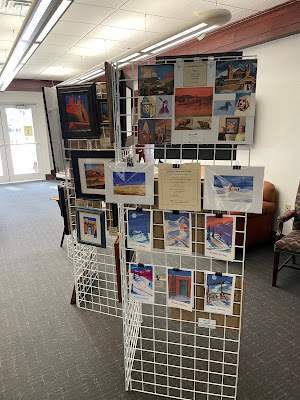 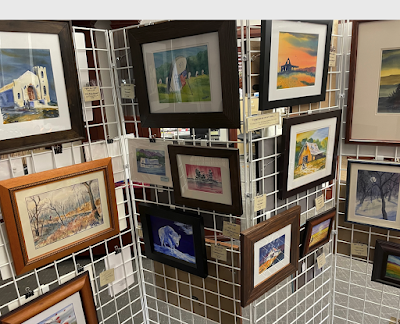 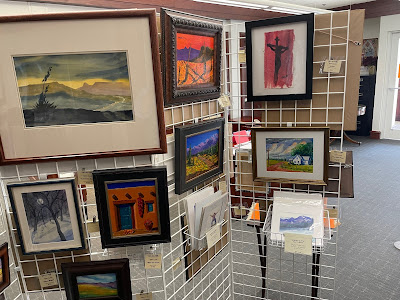 The Ides of April


The month is half over without a single blog post. It's been one zoo after another, with personal, business, art and family obligations. Little time to paint, and no impetus to blog.

But today I finished the second painting of the month, a commission gained during Edmond's first downtown Vibes event the first Thursday.

It had taken me at least three weeks to get ready for the event, buying materials and more to display my art inside Prime Time Travel on Broadway. That blog and photos are coming in next post today.

Because of the weather--wind with a capital W--the crowds were smaller, and I was glad I was inside. But in spite of virtually no sales, I met lots of people, learned a lot, had fun and gained this commission.

I'll be more than ready for May 5th's session  outside on the sidewalk by Citizens Bank.

In the meantime, I completed this today, home again in my imagination in New Mexico, thinking of adobe and blue skies.

(Note, the sky is more a Georgia O'Keefe sky than here, cerulean blue,  because of the photograph).