I love traveling the back roads because you discover all sorts of unexpected treasures.

Here I find real Americana, not the plastic chain stores of the cities.

So it was last week, in rural Texas, not too far from an expanding metropolis, where there's an old general store.

Today's little quick watercolor is not an exact replication, but a rough impression stuck in my memory. It had a flag pole, but I had to add a Texas flag.

Developers are trying to damage Hafer Park, and harm our neighboroods at the expense of developers with no concern for quality of life in Edmond.

They propose a monstrous apartment complex with just one outlet on 15th street. This has been turned down before. The city meets today.

Here was my email to city officials. 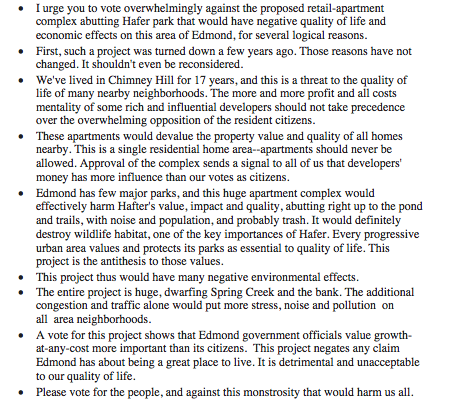 Story of blessings in a box 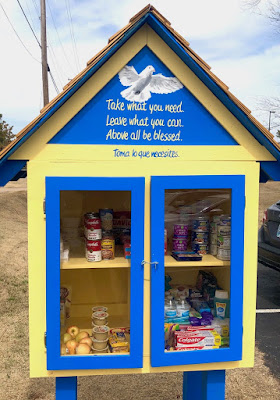 Blessings come in many forms and shapes, and for me, the past several days, they've been in a box.

Friends at Dayspring church of Christ in Edmond asked me to decorate their new Blessings Box, a gift to community people who may need help in these difficult times.

These generous people built the box, painted it blue and yellow and erected it in early March on their property on Chowning Ave., northeast of UCO.

They, and others, stock it with food, free to whoever need it. Member Scott Hale did the lettering. 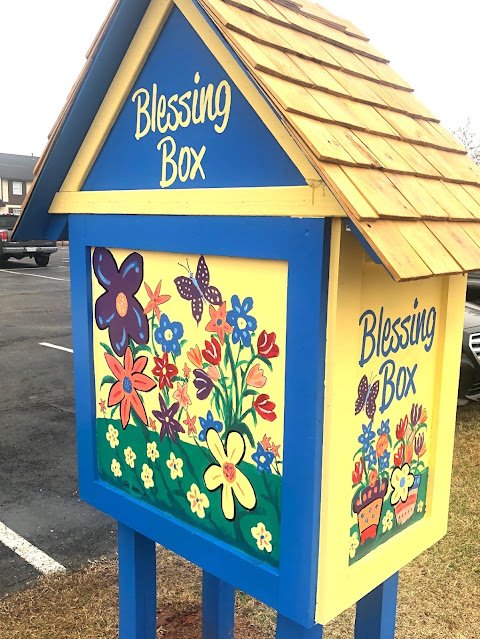 "Paint something whimsical,"--not a landscape--was my only direction from members David Lowry and Cary Williams.

That took some time to sink in, think about and search for possibilities. Then I measured the sides,  30" by 29" on the back,  sides about 13" by 14".   Plus a triangle over the doors. Once I decided on flowers, I did rough scaled grid sketches on paper, chose colors--purple, red, orange, blue, green, white, plus the yellow of the box. I also kept a few plastic containers from home for mixing colors like grays, dark green, red orange.

I penciled in a rough grid on the box, and tried to think about sequence of painting. I penciled in the rough shapes of the possible flowers on the box grid from my paper sketches. 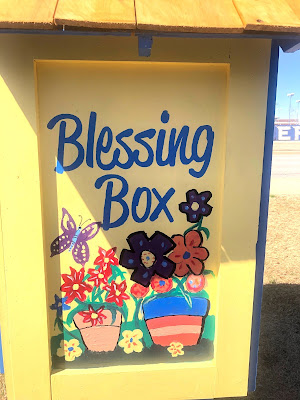 March weather didn't cooperate, first with wind, almost constantly, and then with cold or wet weather on alternating days. One bad omen delayed the first day on March 9. On the way to try to start seriously one sunny, but windy morning, I turned the corner and heard something fall over in the back of the car. When I stopped, I found that most of the remaining gallon of yellow paint had spilled onto the vinyl mat in the back of my Subaru.

I hope God forgives a few expletives that result when you're on a mission. Back home, it took an hour and a half, lots of water, rags, steel brush and scrubbing to clean up the car, and me. 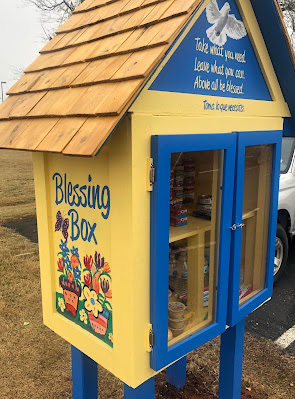 Since then, first day was painting the dove over the door. And it's been touch and go with the weather--you have to have at least 50 degrees for the paint, mistakes, editing and thinking along the way.

The first two or three complete days were basics, shapes and so forth. The last complete day was when "whimsy" set in, some fun and real creativity. Yesterday was completion day, touch ups and final details.

While I was painting, some UCO students would come by and comment, smiling, and say "God bless you." One lady with a little dog walked over from her nearby department, praised my work, and said she was so glad to see such a project, noting that there had been a time when she'd needed such help. She  put a few groceries in the box.

So here are the results, a blessing for my spirit in these times.

"The sky was as full of motion and change as the desert beneath it was monstrous and still,--and there was so much sky, more than at sea, more than anywhere else in the world. The plain was there, under one's feet, but what one saw when one looked about was that brilliant blue world of stinging air and moving cloud. Even the mountains were mere ant-hills under it. Elsewhere the sky is the roof of the. world, but here the earth was the floor of the sky. The landscape one longed for when one was away, the thing all about one, the world one actually lived in, was the sky, the sky."

"Out here there's the sky," I've told you is an overlying theme of my painting, which I paraphrased from Willa Cather, who says it better than anyone.

So amid today's constant March turmoil in our Oklahoma skies on the Great Plains, here's today's watercolor, homage to Willa, who understands how the sky gets into us.

A viral year, looking back


A year ago today, I painted and posted this watercolor, "Virus." Here's the link to that post: "Going Viral."

It hit Oklahoma in public when the Thunder game was abruptly canceled two nights before.

Since then, a year of uncertainty, of sickness, death, tragedy, of turmoil, chaos, and ignorance in more ways that one, global cultural and economic and political upheaval and violence, and survival.

In many ways, America, the so-called "greatest nation," has been hit the hardest, in all those ways. Of the more than 2.6 million world wide deaths, 20 percent--one person in every five--more than 500,000 have been Americans.  Such an ironic epitaph for American "leadership," "individualism," selfishness and stupidity of the free world.

As I wrote on pages 58 and 59 of this year's journal of the plague, the third journal I've kept every day since last April 1, I reflected on all of that, remembering the uncertainties, the fears, the idiosyncrasies, the changes that dominated our lives.

For my record, I started listing what I was thankful for, what were the positives from this deadly nightmare. Then I listed the negatives. I won't go into that, but there were positives

First, was survival, and getting vaccines.On April 1in the first pandemic journal, I wondered if I, we, would survive. It was iffy indeed. I've had a son and my brother get relatively mild cases. I know of many others who were not so fortunate.

Next--the most watercolor paintings I've ever done, about 244 in 2020. I tried to bring some color into the dark world, for others but also for my own purpose and survival. That also led me into developing summary slide shows of my work on the blog and internet, that continue, month by month

Next--those watercolors boosted my almost daily blog writing to a record year, because they forced m to think and write about them.

Then there was the almost daily journaling, key to introspection, a routine, and hope. Counting today's two pages--page 59 total in the 62 days since Jan 1, I've filled 355 pages. Some entries are brief, others more than one page. I've probably only missed five or six days all together, an accomplishment for one who is not disciplined enough to keep a daily diary.

My inspiration came from Samuel Pepys who kept his famous Journal of the Plague Year in England during the black death of the Middle Ages.

"Out here there's the sky."

That phrase has become the mantra for much of my art work.

At first, I thought I stole it from Willa Cather's great phrase about the sky in Death Comes for the Archbishop, but no, hers is much more descriptive and better written.

“Elsewhere the sky is the roof of the world; but here the earth was the floor of the sky.”

But she inspired me, as do the skies out here.  I remember my first watercolor teacher Cletus Smith telling me about one of my early paintings that had a sky I questioned: "Somewhere there is a sky that looks like that."

Still have that painting, hanging in the house...a constant reminder.

Today's watercolor is  testament to those comments.


When it's springtime on the Great Plains in Oklahoma and other states, warm days bring clear skies with a few clouds and shadows over the gentle hills. Wheat and alfalfa begin greening, hawks ride the thermals.

Trees fill out, silhouetting small towns straddling country roads, leading from one horizon to the other.

It's a time to travel, at least in your imagination, in your memories, to the wide open spaces, free of the hustle and bustle and noise and traffic of urban life.


A friend once quipped that the wine I liked, red Zinfindel, matched my personality..."peppery." Now that was a compliment, worth a smile.

It fits, and I thought of that working on a watercolor birthday card today.

The more years, the more wrinkles, drier skin...and I thought of those iconic New Mexico red chile ristras, hanging from a viga on an adobe wall.

Now as an aging  person you might not be as hot as once, depending on the climate and years and personality, but you definitely will be spicier, peppery. Plenty of taste and character from living and memories...depending on the years and experiences.


In these confined times, travel of any kind is more than welcome, whether via TV travel videos, books, old photos, or even dreams and memories.

Watching one travel video of New England last night, hoping to plan a trip there, it made two factual errors. Second one was this phrase, "Harvard, one of the oldest universities in America." WRONG: The Oldest, 1636.

But the one that first caught my attention, and helped spur today's watercolor, was the comment  that the Pilgrims established the first European settlement in America in 1620. WRONG on three counts. Vikings, about 1000. Jamestown, 1607. And Santa Fe, the capital of Spanish New Mexico, 1610.

Thus my imagination traveled today, from memories, and thus today's little watercolor greeting card, done quickly from memory, blurred by memories, even if I can't visit again in person yet.


Long ago I heard a song that seemed to draw me to faraway places, "Look Down that Lonesome Road."

Years later, it's no wonder I love back roads, less traveled roads, sparsely settled, free of traffic, roads that beckon you, speak of discovery around the next bend or over the hill, especially in New Mexico, Oklahoma or Texas where there are plenty of wide-open spaces

I looked up the song and found it is a 1927  with music by Nathaniel Shilkret and lyrics by Gene Austin, written in the style of an African-American spiritual.

Thus today's little watercolor, the first of March, after an earlier failure where I was too uptight to be traveling that road.

Here are two you tube. links to the song, if you wish to add some music to the watercolor..