A "dormant" month comes to an end

It's been a dormant month for me in blogging and painting after a year of consistent painting, writing, blogging and even reading. And the year is one third gone.

I wouldn't have used that word until I read Austin Kleon's weekly post today: Not languishing, I'm dormant-not-languishing-im-dormant/

It's been a month of lots of personal stress and distractions that seemed to sap me of energy or the will to pick up paint brushes or sit down and write, and my reading has withered.. The month was rescued for me by two trips, to San Antonio and to Canyon, Texas to see my children and families, Vance Clark and Dallas Bell.

But there were few paintings, and even fewer inspirations. Every thing I tried seemed to flop. Lethargy, avoidance and procrastination set in. I kept thinking it had been four years since I retired from UCO. That and the passage of time also weighed in. Today I read Kleon's articles, after rereading his book Keep Going earlier. His metaphor of gardening helped put the month in perspective. We don't always have to flourish. Having been dormant, even in the spring as the world comes back to life,  I'm hoping the visits with my kids and grandkids will help boost my moods.

Earlier this week, I tried three 5 x 7  watercolors, and here they are. They're all about passing time, in its beauty and beastliness, but at least I painted.


Art (as a verb)  is a solitary journey.

The deeper you get into it, you keep looking for the road less traveled.

The pandemic has helped us focus  in many ways, and while I have sorely missed interaction and support with friends and family, it has increased solitude, time to think, to brood, the try to bring something creative out of being...alone.

In the early days I found art my therapy, home for my thoughts, my imagination, a fortress against the tragedy. As it has lessened for me, I've notice my art has also been muted.

Today's watercolor, the first larger one in a while, that took a long time to come about in my head and heart,  tells that story.

Everywhere you go these days in Oklahoma, one color stands out. Stands out against the greening trees, other bare branches, the coming spring.

We've lost six trees to ice and cold this past year, and it's time to plant a redbud.

April has not been a good month for me, in painting, or in blogging. No excuses, but driving around, and shopping in a nursery does help. In the meantime, here's today's little impressionistic watercolor. 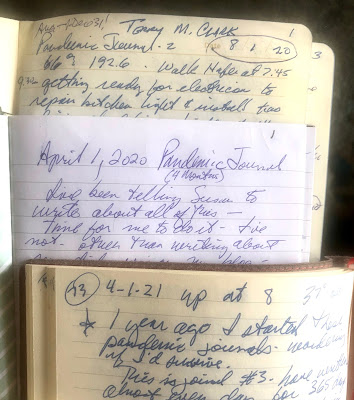 Yesterday marked a year since I started a daily journal of the plague year--not knowing if I'd survive the pandemic, or if I could keep up a routine. 368 pages later, the answer is "Yes."

I've never been disciplined enough to keep a diary, but the uncertainty of these times, I wanted to start keeping a personal record of our ordeals.

Perhaps the model was Samuel Pepys' 1660 personal diary which also covered the plague in London. It was certainly the idea for this old repentant English major.

When the pandemic first hit us in mid-March, I determined to start almost daily watercolors, hoping to bring some color into a darkening year. My slide shows of those watercolors are complete on this blog, through February, and March has slacked off. But the idea for the journal began in March a year ago.

Obviously, I wrote more earlier than I have of late, especially after vaccination. Some pages have only a fraction of a page, others run for two to three pages. What is remarkable is that I've only missed about five or six days in the entire year.

It's changed over the year as well, as I keep track of temperatures, weather, my weight, and the books I've read and paintings. Early writing included the multiple pandemics--biologic, the political nightmare and racism, as well as the ice storm and other worries..

I've started  going back and reading a few pages at a time, and it's like going back in time to what we've endured and survived.

How long will I continue? Don't know. This morning's notes were brief. I may add some later...it's almost a compulsion now, like this blog, because there are books to read, and paintings waiting to emerge. And Like Pepys' diary, its personal, not meant to be shared. His was discovered and has become a classic. Mine won't--besides, nobody can read my scrawl..