Humidity hugging you and Distant thunder

Summer on the southern Great Plains doesn't look at calendars.
Today the humidity and temperature  soared, almost sticky, certainly sweaty, weather with bright sunshine. And in the afternoon, the clouds started building, and afar off you could hear the rumbling of thunder as the horizons turned hazy, and gray blotched the blue skies.
You  feel the humidity hugging you, the sense of summer sourrounding you closely. Watercolor is akin to that moisture. It leads to trying to paint that feeling of distant thunder, of dripping atmosphere.
No comments:

Taking your breath away

How long since something, some one took your breath away?
It's rare isn't it, and that's too bad, because it bespeaks the mediocrity we sentence ourselves to in our day-to-day existence, it seems.
What takes your breath away? There are places, people, happenings, scenery, events, and more. You remember them forever.
Today was one of those kinds of mornings, even on the Great Plains of central Oklahoma. I love the back roads, driving slowly, smelling fresh-cut alfalfa, seeing the ready-to-harvest wheat in the breeze, looking at the horizons and the undulating roads, listening to meadowlarks, watching hawks soaring overhead. The morning light was bright, and crisp and clear.
Glen Campbell's song--

That keeps you in the backroads
By the rivers of my memory
That keeps you ever gentle on my mind.
My mind wandered with imagination, and the freedom from the noise of high speed traffic and congested cities. Just a peaceful road leading to who knows where, a metaphor for life.
I didn't have the Rockies or other magnificent scenery, but the freedom of the back roads and imagination, and a beautiful, breeze, sunshiny day. "Paint what you feel," wrote my most recent watercolor influence.  Thus this watercolor.
A day to take your breath away--how I feel.
No comments:

Rainy weather, what do you feel

"Paint what you feel, not what you see," wrote the author, Betty Schlemm in this old watercolor book I found recently. And after reading her accomplished advice and instruction, I wondered if I should even try to paint...so much I don't know, so much to learn.
Yet I know my best attempts at watercolor come from both my feelings, from letting loose, and from happy accidents.
I was almost afraid to try again..so much to practice, so much to try. 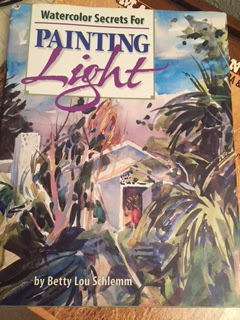 But then it started raining, and I love rainy weather...no wonder two favorite songs are a "Rainy Night in Georgia" and "When Tears come Down."
So turn on the phonograph, put on some moody vinyl, look out the window and let your mind travel.
Pick up the paint brush, mix some paint, attack the blank paper,  and feel...it's far short of her talent and ideas, but it's part of the journey.
Keith Richards said, when asked what he thinks when on stage that he didn't think, he just feels.
I feel I'm trying to get there, traveling along wet narrow back Oklahoma roads in rainy weather,  but miles to go... what a feeling....
No comments:

They're dramatic and dangerous, and daunting. So is trying to paint one.
A wall cloud, sweeping across the skies and the Great Plains...familiar in Oklahoma, but not to be trifled with.
No comments:

Radar shows it coming. The forecasters'  maps plot the chances and arrivals. The sunny skies are unsettled, with southerly winds blowing clouds toward it.
Tornado weather on the Great Plains, where you can sense them in the weather and humidity, and see it on Oklahoma's northwest horizons hours ahead of time.
Today's watercolor, green and dark blue on the horizon, windswept golden wheat bending toward it.
No comments:

Oklahoma's skies and clouds bring constant drama to the Great Plains, adding life and imagination to every day.

(Inspired by this north of Edmond.) 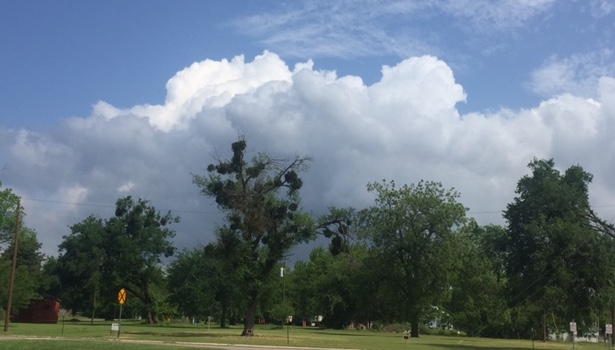 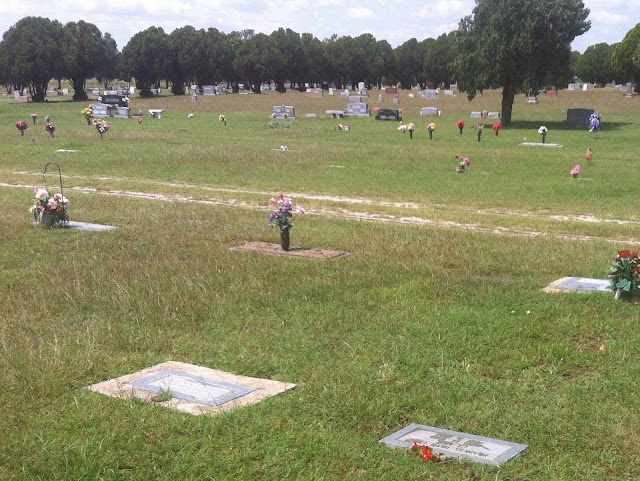 "I don't know who you are, but you look like you could use a mother's hug," she said, walking toward me.
I had no idea who she was, but I managed an astounded smile, and hugged the gray-haired woman in the middle of the Waurika cemetery.
I was there on Mother's Day, talking to Mom. It had been a long time since we'd talked and I had lots to say and questions to ask and things to think about. I was having trouble saying good-bye. It had been years since she died, and my visits to the cemetery have been few. 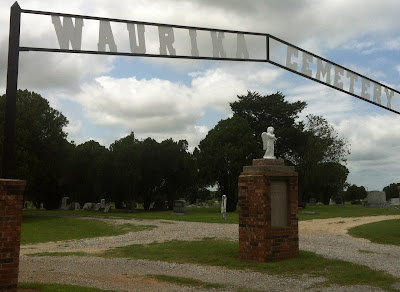 I was watching the grave when I noticed the car drive up the side road on the cemetery, and turn down the gravel lane where I was parked in front of Mom's grave. I know lots of people's names in the cemetery and in the town, a mile and a half to the east, so I thought it might be someone I knew from years ago when I owned the newspaper there.
The tires crunched up the gravel and the car stopped just a few feet behind mine. When she got out, I thought she looked familiar, but I was wrong. By the way she was dressed in a stylish pantsuit, I think she'd been to church.
She smiled when I said I was just talking, and after reaching up to hug me, a perfect stranger, we introduced ourselves.
She was from Ryan, 10 miles south, and she'd been out to the cemetery to visit her parents' graves, and was on the way to Oklahoma City to see her children.
Her hug is one of the most remarkable things that has ever happened to me. Things like that don't happen in cities, and I doubt they happen in a lot of states--but they do in Jefferson County, Oklahoma, and I'll guess in rural Oklahoma.
It was one of those days of omens or spiritual symbols or angels, I suppose. The low clouds come charging up out of Texas in ragged, single files, like the longhorns on the old Chisholm Trail, fresh from crossing the Red River over a century ago. The south wind blew the prairie grasses just like the cattle moving up through the green spring pastures. The first herd of the season wouldn't raise much dust on such a cool day, with the sunlight breaking through the ranks of clouds. You can hear the wind in the grass, in the flowers on the ranks of graves, in the cedars in the old part of the cemetery.
From the cemetery hill you can see the town hovering along the Beaver Creek bottom. Most buildings and houses are hidden by trees, except for water towers and new houses shimmering in humidity on the windswept prairies on the other side.
In the trees and on the gravestones, mockingbirds and meadowlarks sing. It's a day to talk to yourself, or the occupant of a lonely grave.

Some things fade with years, but the person sticks in memory
You can hear eternity in a graveyard. Besides the birds and the wind, the only sound is the passing traffic on the nearby highway. Out here you can hear the tires before you see the cars--that's the sound of time passing. But time seems to end in the cemetery. The wind is timeless, and the bird song is present tense. From somewhere a cock crows and a dog barks--more symbols, more messages. A red-tailed hawk silently lofts itself into the wind from a power pole a half mile away, and high in the air a buzzard circles on widespread wings, life and death together.
I plant small potted red pansies on her grave, and go get water to soak the peat moss. They will wither and die in a few days under the wind and sun of southern Oklahoma, but they are real, alive, better than the faded plastic flowers I see nearby. Some memories wither, but others are forever. The water runs out onto Mom's gravestone, and I scrub it clean, and stand back to talk some more. 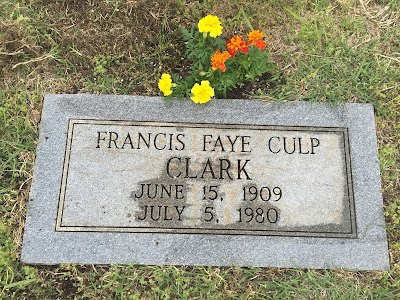 The breeze begins to evaporate the water on the flat gravestone. But I notice that the moisture retreats to the indented letters of Mom's name and the dates of her life. Water in the indentations and the face of the stone around them dries the slowest, highlighting the barest facts of a life.
Some things fade with the years, memories come and go, but the person sticks in your memory, who she is, what she means to you. Even the dates dry out before the name, and that's right. The years don't matter near as much as who the person is. The essentials in our hearts don't dry up.
I was watching the moisture when the kind woman drove up. As she got ready to leave, I told her to be careful, and to love those kids. She smiled. I know her kids love her.
As she drove off, I looked back at the grave, and the letters of Mom's name were still moist. I bend over to kiss the grave. Now I could say, “Goodbye.” I wish I could hug you again.
No comments: 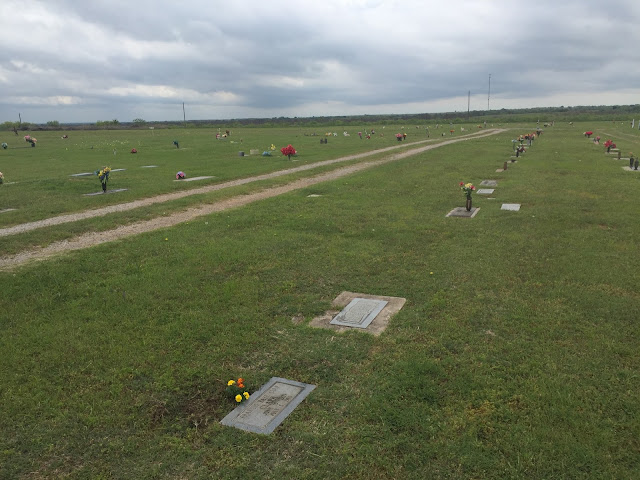