Bastion of the First Amendment

I love a college campus where students and others openly advocate their beliefs.
Consider these photos from today.
I don't buy extreme right wingers bashing "liberal-left wing academia" that people gripe about. We have many different groups from all beliefs here. It's great.
I'm especially proud of our editors at the student newspaper The Vista, hosting public forums...this week's by the Muslim student association, We Are America.

When the sun stands still--equinox

If you're up at sunrise and heading east this week, the sun seems to stand  still straight east.
Equinox, when the day and night are of equal length, the signal of a new season...yet so much more.
As I pull out of my neighborhood heading west, the glare in my mirrors blinds you. If you're driving home in the evening, the same is true. While the official day is only one 12 hour period this week, the sun barely moves.
The ancients knew and accurately measured it, whether at Chaco Canyon in New Mexico, or at Stonehenge or in many other sacred sites. Why? More in touch with the seasons and nature than us, they took years to be able to mark these days, days critical to their livelihoods and religions.
Those are my thoughts this week--having camped at Chaco on equinox, and having pulled out of my subdivision heading to work. The sun seems to just sit on the middle of the road on the horizon, not moving north or south for a few days.
Today's watercolor, what I saw, in fact, and in imagination, this morning.
No comments:

Don't be a sucker for "fake" news--guidelines

Are you skeptical? I hope so.

So I tell my students. Challenge everything you hear or read—including this sentence. Don’t take anything without checking it out.
An old copy editor’s maxim—“If your mother tells you she loves you, check it out.”
Maybe not that extreme, but with all the talk of “fake news” these days and trust in the news media at a low, intelligent citizens need to be more vigilant about their news sources.
With the current occupant of the White House labeling everything he disagrees with as “fake,” and the verbal vomit of “social” media,  this is more critical than ever.
So here are my thoughts that appeared in my column in this month’s Oklahoma Publisher.
A reader’s guide to getting factual news


(Don’t be a sucker for fake news)
You can easily look up the ownership of your local newspapers, television and radio stations.

The Llano Estacado of the Texas Panhandle. Big, empty, wide open spaces where the wind never seems to cease.
Fences are few and far between, and the old ones have the character of the land...rugged and ragged as the land and the posts. The wind rustling and grass on the fence lines and singing through the old rusting barbed wire.
This old one is long gone now, replaced by more efficient steel posts and new wire but it was just up the road from my daughter and son-in- law's house near Canyon, Texas.
1 comment:

Abandoned cabins and farmsteads dot the Great Plains, testaments or tombstones to the people who tried to scratch out a living where only nomads belonged.
I am always attracted to them, imagining the lives and ghosts that inhabit them, the stories untold, beckoning of love and loss.
The prairie wind and grasses and open skies breathe "lonesome."
Have we  not all been lonesome at one time or another?
Inspired by a black and white photo by HrSchmitt.


Flowering redbud trees stand out like brilliant lace  in early spring against other still leafless trees, even on a cold, gloomy day such as this.
They hold the promise of even more beauty, when the sun shines  and the humid air and breezes lift clouds through the blue skies, and stir their branches into a melody of motion.
They're difficult to paint, with varying colors and infinite forms, so any attempt is just a representation of shapes and colors. Thus today's painting, an image sealed in my mind from a 20-year-old-story by journalist Rick Bragg, describing dogwood in Alabama.
Below--the stages of the painting. 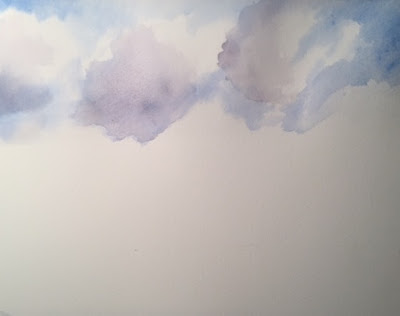 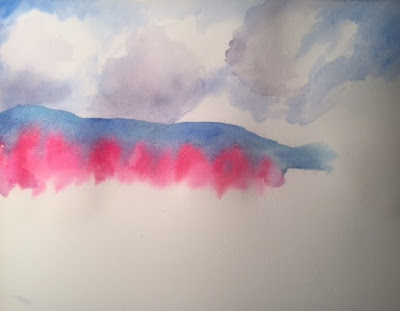 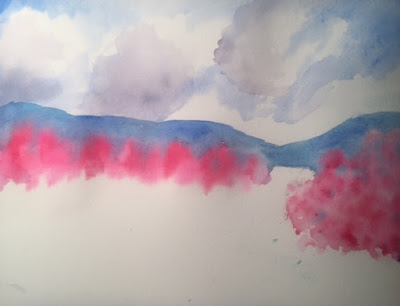 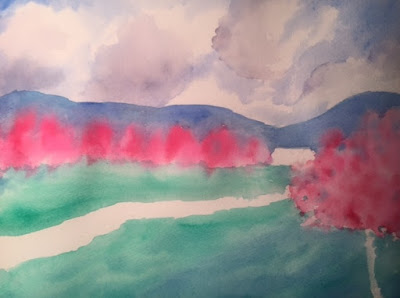 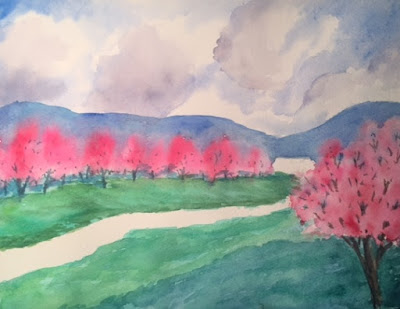 Mountains are music to me, and thoughts turn to cabins and aspen in tn the high country. The first snowfall on the high peaks, the brilliant, if brief, colors of aspen--changing seasons, changing memories and years.
If I can't visit in person, at least I can with my paintbrush...finding people and memories and travels and adventures in imagination as the image takes shape.
No wonder I love painting mountains and cabins.
No comments: