What to do when the muse seems to have gone on vacation?
Think. Imagine. Draw. The muse responds to work, not sitting still.
I've written several times, and painted as well at the Territorial Oakwood Cemetery at the end of 15th Street in Edmond, right before you get to Lake Arcadia.
It's a place I go for quiet, imagination, and memories.
Today, I took my sketch book, and three markers--light gray medium gray and dark gray or black--usually used for value sketches before I paint, and drove over there, not knowing what was going to happen.
I'm particularly attracted to the several Civil War veterans' graves, many more veterans' graves, and to the many infant graves. The cemetery is still maintained, and flowers and flags decorate many of the graves. Early Oklahoma territory was a fatal frontier for many settlers.
Seeking shade and the breeze, I started looking at the many older tombstones. So many stories, so much art that could become a project.
So here they are, three values only, as the afternoon sun cast strong shadows on the green grass, and the wind whipped the flag and taller grass.
Though Oakwood is still a family cemetery, these childrens' graves list their parents. Both of these were by themselves, which means the parents moved on and must be buried elsewhere.
So many stories, and thus, so much art, just waiting.
And here are five links to previous posts with photos and and artwork. Here's one watercolor done two years ago on Memorial Day. 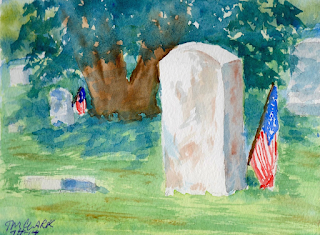 Blues are also colors of Christmas

Blues. I use more blues in painting than any other. Don't know why.
As my three month individual Christmas card watercolor challenge continues, this one reflects my love for the Southwest, for the big skies, for the iconic yucca.
Blues used: Royal, Ultramarine, Peacock.
And I found out this week that the color for the name "Terry" is blue. Hmm.
No comments:

Christmas decorations are already for sale in stores. The only positive note for me was a reminder to get busy on my annual challenge.
Individual watercolor Christmas cards are a challenge every year, because the list seems to get longer, even after retirement.
After at least nine years of doing these, something that started out small, I've reached a point where originality is daunting and seems to have waned. I can't remember who got what card in the past, and if the tradition is to continue, there has to be some originality, somewhere.
Or I just cease, which may happen. But not this year.
Because there are other sides of trying to paint these...I do enjoy giving something people seem to appreciate, and the cards prod and invigorate my other painting, especially when I'm in a creative slump.
So here is the beginning, three months out from Christmas day.
No comments:

Hay there, it's autumn--be prepared

I'm still fascinated by the patterns and light on round hay bales across our rural landscapes, as farmers and ranchers get ready for winter.
The principle echoes Paul's direction to the Corinthian Church comes to mind, urging people to "lay by in store." Add the changing light of early autumn, which means more colors, and here is the third painting attempt. I think there will be more.
No comments:

The power of painting

I believe in "places of power," places where some other writers have said the universe is "thin" between our physical word and eternity. I've written about them before.
If you're a believer, you can sense them when you get close, or are magnetically drawn to them. For me, some are located in New Mexico...the ruins of the mission at Pecos,  at Chaco Canyon, near the Truchas Peaks, and in the shadow of the Manzano Mountains. I have found one, actually more human made,  nearby these  last few years in Oklahoma--but that is secret.
The Power of Pecos
I know there are other such places in the world for other peoples...Taos Mountain, Jerusalem, Mecca, Himalayan shrines come to mind. Many would use the word "sacred" to describe them, and I don't disagree. It seems to me if a place brings our earthly existence in contact with the spiritual, eternal existence, it is sacred, powerful.
It's interesting to me that I've tried to paint some of my sense of power in each of those.
Then a couple of years ago,   after reading books by several authors whose thoughts seemed to coincidentally overlap or echo, I found insight into painting  and power from a  conversation with another part of me.
I found it again this morning, searching for solitude and direction, which prompted these thoughts. Here it is.


"Good morning Terry Mike"
"Morning, Terry
"Beautiful day, good coffee,  smell of bacon frying. morning light on the Manzanos is beautiful--love the colors."
"Yes it is"
"This is one of those places of power, both to my Dad and now that I think about it, me, wanting to paint it too."
"Yes it is"
"I need to go to a place of power"
"You can create your own places of power, Terry"
"Wow. I need to finish that painting. I've tried several times and failed, started over. why am I so intimidated?"
"Maybe you don't paint enough."
"Yes, we've talked about that before--so I need to be painting more, i know"
"Did you notice all these worries disappeared when you were painting yesterday?"
"Yep. I keep thinking about someone  telling me she'd never seen me so happy as when I'm painting."
"Don't you know that when you are painting, you're in a place of power"
"Wow again"
…
"It's time to leave, but I don't want to,  but  time to go back to that other world--almost said 'real' world but didn't. Did you notice Terry Mike?"


"Yes, because this is also a real world--it's only a tangent to it"