Friends in New Mexico and Colorado are already posting photos of the signature colors of autumn in the high country, beckoning me again.

Though it will be a while before we can drink in the multi-sensory spells of that country, I can still dream, and try again to paint  the glittering,  quaking images of a high altitude beacon.

Almost everyone who knows about the magic of aspen has painted, or tried capturing their spirit, how they demand your attention and wonder, in original ways.

Aspen always catch my attention, even in summer--as you drive up into the mountains, gaining altitude, seeing the white trunks of the aspen always prompts an exclamation, "Aspen!"

In the autumn, their changing leaves, twinkling in the clear alpine air, take your breath away with yellows, oranges, reds and more, even from a distance. To wander a country lane between an aspen grove is a walk of wonder. And somehow, photos never seem to quite do them justice.

It is difficult trying to come up with an original composition, not an imitation of some other work I've seen, and this is not the first time I've attempted to tell the story of their effect on me and others. But it is the first in acrylics, perhaps the second of my road paintings.

(Soon to be available at In Your Eye Studio & Gallery in Paseo Arts District.)


Back porch thoughts as autumn nears next week--shorter days, cooler temperatures...leaves will soon be changing. The texture of the season looms in color, eagerly awaited after this summer of heat.

Dreams of a favorite season, and today's painting on back porch , in plein air, "Autumn Road," playing with a palette knife to grab the textures, and a few brush strokes. Soon available at In Your Eye Studio and Gallery in Paseo Arts District.


One hundred years ago, the British Empire, with the most powerful military in the world, and  influence around the world, was nearing its sunset.

Today, it seems the American empire seems to be following history. The most powerful military, yes. Influence around the world? Yes.

But internally, the rampant signs of decay, not just political, but in technology and education and constant war and more are everywhere in America.

Consider China, the new super power of the the rest of the century, in technology and influence.. And it will also pass, as the pressures of population and acceleration of time take toll of "civilizations."

'Tis not the first, nor the last, for sunsets on the British or Roman, or any other empire, including the United States, tearing itself apart.

Today's painting harks back to when another empire of freedom was in its sunset. That of wide open spaces, of peoples who lived in harmony with their world.. Not a utopia, nor an empire, but of existence, wiped out by  so-called civilization of aliens.

Gloomy thoughts? Perhaps, but also,  inspiration for freedom, for survival.

Where is your cabin?

Cabins have a long life in my memories, of people and places and photos and more.

Daydreaming of them all in the summer of heat that sapped my creativity,. I had to return to my roots.

Thus today’s painting, wondering “Where is your cabin?"


My current definition of "God" is "infinity." Eternal present spirit tense. "I am that I am,"--Genesis.

All art has stories, has histories, encounters with spirit, and so it is with this week's painting.

It began this when when a friend and fellow artist  Jim Resnicek in In Your Eye Gallery bought my 5 x 5 acrylic of a spiritual ladder, "Journeys." Here's the original blog post on it, from a year ago--"From Dust to Dust."

While we were talking, about art and ideas, I found this painting in my mind.

It comes from inspiration by my second daily readings, of 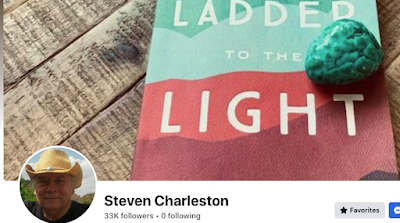 Chickasaw elder, Okie  and Episcopal priest Steve Charleston, whose daily meditations a read every day. You should follow him on Facebook for this calming words and insights into the infinity of "Spirit." His book, Ladder to the Light, drawing on New Mexico pueblo religions and cultures, of ladders from inside kivas, speaks to our struggle in this un-spiritual world. 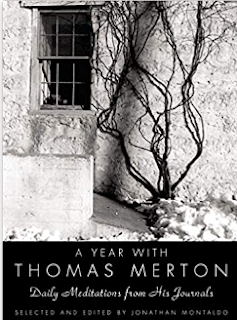 Two more readings begin my days. They also influenced a part of this painting. First there is the daily calendar of comments  and insights by the Catholic Trappist monk and mystic, Thomas Merton. Though he wrote and died in the 1960s, his imagery and insights seem to fit todays turmoils, evidence again of eternal spirit and present tense. See A Year With Thomas Merton.

The third daily reading is always Fr. Richard Rohr, a Franciscan priest who is in charge of the Center for Action and Contemplation in Albuquerque. His daily email  seems to always fit within the scope of these other two.

So this painting calls to me of our journeys to infinity, step by step, rung by rung up a ladder, across the spectrum of light and life.