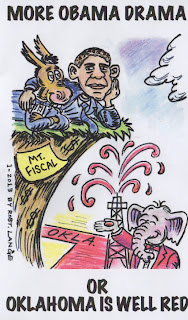 If you follow politics and media, and who doesn't in these days and in this state and nation, then the annual OKC Gridiron show is an annual don't miss event.
So it was this year, with the journalism scholarship fund raiser. Last night's closing show, at the Lyric Theater in the revitalized Plaza District of Oklahoma City, brought laughs galore from the scripts, acting, and music. You have to be able to laugh at the good-natured jabs at every political viewpoint, and media,  to enjoy it, and the music makes it that much easier. I think this year's lyrics and music were among the best and wittiest I've heard. The live band is always a highlight, and makes you want to get out and dance.

'The live music makes you want to get out and dance'

I enjoy it because I know many in the cast, filled with veteran journalists, friends and former students and colleagues. Some of the folks can really sing, some can really dance, some can't, but all gladly try to make fools of themselves to raise laughs and money. Since opening in 1929, the group has raised more than $500,000 for collegiate journalism scholarships.
Obviously I have favorites in the cast and lines and acts. This year, perhaps mine was the Hobby Lobby song, sung by a heavenly choir to the beat of the Hallelujah Chorus, poking fun at Hobby Lobby's protest of contraceptives in the new health law. I also loved the lines and attitude of snobbish Edmondite, Dana Meister. Billie Rodely is always a dead ringer for Hillary, Bart Vleugals has Obama's speech down pat, ditto for Judy Murphy as Nancy Pelosi, and Cindy Reich for Gov. Mary Fallin's cheerleader attitude.  You can see some previous acts on YouTube videos. Here's the link to the club: okcgridiron.org
Thanks to the entire cast for the hours of hard work, script writing, and creativity you bring to Oklahoma.


We attended with Perry and Sara Kaufman, (Susan's sister), after having dinner at Saint's right down the street. The Irish food and drink and service were delicious. It's so good to see a neighborhood come back to life--people out at night, having a good time. And for dessert, we had great political satire, music and laughs.