The end of a month, the end of a day, "When shadows grow long," it's easy to feel lonesome, to dwell on memories, and people and places and the past, fleeting as the sun and the years.

Wide-open spaces, the sounds of silence,  and remote gates add to the moods.

Thus this week's acrylic painting, a back porch creation from the images in my mind, from those places, people, spaces, silence and gates that crowd my memory.

A study in contrasting colors as wide open spaces of  New Mexico, the Southwest and the vast skies beckon.

The Colors of Autumn and Adobe 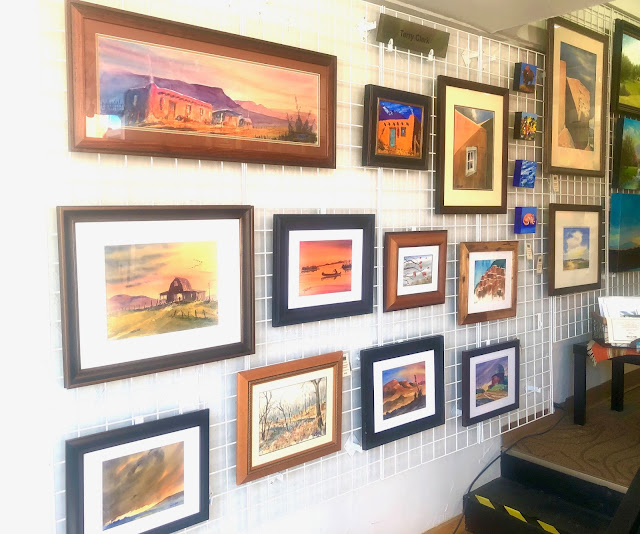 "The Colors of Autumn and Adobe," my September exhibit In Your Eye Studio & Gallery in Paseo Arts Districtt opens today at noon, and I'll be there. Watercolors and acrylics.
No comments:

Saved by a cat

I've been working a week on another acrylic painting, going back to brushes this time.

But the subject to this time is very similar to the last painting, "Adobe Sunset." Every day is a step in solving problems, and usually my problems in painting come from not planning far enough ahead. So it was this time.

The painting was unbalanced and the foreground drab. There wasn't much to distinguish it from the previous one. I was down to painting the shadows and some touch up, and stumped.

Then last night my wife Susan said, "It needs a cat."

Saved by a cat.

So here is the result, modeled after our cat, Sophie, curious about a visitor. Still on the back porch easel in case I see something to fiddle with tomorrow. To be framed and at In Your Eye Studio and Gallery in about a week. I'm not sure about title. "Cat House" came to mind, but that seemed disrespectful to the cat.


My do-it-yourself art schooling is a story of step by step learning, from lots of mistakes  and trying new things, based on ideas from books, videos and talks with artists.

This one completed today, a 8 x 10 acrylic on canvas board,"Adobe Sunset," was an attempt to paint with palette knives on a larger surface, compared to the small one posted about earlier, "Blue Tempest,"  when I wrote about by fascination with palette knives.

Main lesson learned: Don't use knives where exact details are needed. Go for the impression and texture. I know now why knives work best on  abstract and impressionistic work I put finishing touches and a few corrections on with brushes, and the rough texture made that difficult. I also need to mix more paint as the piece progresses to be able to duplicate what I'm after.

But, I'm fairly happy with this. I'll put a varnish on it in about a week, and get it framed for sale at In Your Eye Studio & Gallery in Paseo Arts District. Another lesson--I will probably go back to brushes.


"Let's paint something," Susan said last night as we were celebrating getting through another week.

I don't like painting flowers--I'm too up tight, but she insisted.

I had one 5 x 5 canvas with a yellow background on it, so we opened up my acrylic palette, squeezed out some bright colors, and began, primarily with brushes and a couple of palette knife strokes.

It was sort of a free for all, just having fun, no rules. We know the season for pansies is past, but their color always brightens winter and spring, before the heat hits. Don't ask me who painted what, because our art blended with the colors.

So this is the result, signed by S.A. and T.M. Clark, loose and abstract, as pansies deserve to be.

The cost of war ending and beginning

By comparison, about nine million Russian soldiers died, with civilian deaths bringing a total close to 20 million.  Germany lost as many as five million soldiers, and Japan more than three million soldiers. That doesn't include millions of civilians including six million Jews.

In the 20 years America was involved in Vietnam, another war without victory,  with active combat from the mid-60s to 1975,  58, 200 Americans died, and 153,303 were wounded. That toll doesn't count the Vietnamese, North and South, that was much higher.

Most fatal was the American Civil War, from 1861 to 1865. Estimates vary on the deaths after all these years, counting both sides, but range from about 650,000 to 850,000, at least 450 soldiers a day. A huge percentage  were those who died from wounds and disease. That was more than two percent of the population, and in today's numbers it would equal about 7.5 million people.  The Confederacy lost upwards of 270,000 soldiers and the U.S. upwards of 260,000. About 22 percent of Southern soldiers in their early '20s died, and the total of both sides devastated America's economy.

A retired U.S. Air Force officer told me this week, paraphrasing "Wars are political, with the military acting as a mechanism for political gains."

And human lives are the price.