I learn more from my students than they do me.
Told Sam Philbeck I was impresses with all his posts in blogging class--60 so far this term.
He asks if I use the blogger ap for iPhone.
Didn't know about it but I do now!
1 comment:

An oasis for the spirit in life's desert

New Mexico, especially for me, northern New Mexico, including Santa Fe, is an oasis for the spirit, and while it is not possible to detail even in a few photographs or words the creative energy of this last week, two events were among my many highlights. 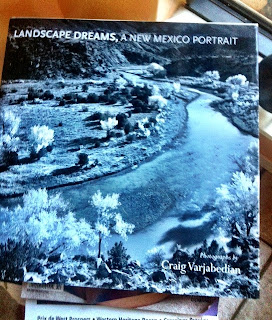 I got to tour the darkroom and studio of landscape photographer Craig Varjabedian in Santa Fe. I met him thanks to poet-publisher-friend Jeanetta Calhoun Mish and wrote an article for The Gazette on his show at the National Cowboy and Western Heritage Museum last year. And lunch with him was great, and we discussed his forthcoming book.

Now the book is out, Landscape Dreams, A New Mexico Portrait, in honor of New Mexico's 100th anniversary as a state. I bought it, of course, and he inscribe it to me. And the joys of touring a black and white darkroom in a quiet Santa Fe neighborhood, courtesy of his partner Cindy Lane. a review of the photos and three essays, including one by Mish, later.
http://www.craigvarjabedian.com/
Then we stopped at Collected Works bookstore and noticed that poet Jimmy Santiago Baca was going to read from his new book, The Lucia Poems, about his three-year-old daughter. So we bought the book, and attended the reading Friday evening. 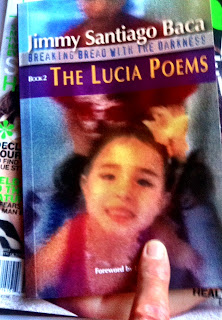 We first discovered Baca years ago at a workshop in Albuquerque. He's an ex-con Chicano who taught himself how to read and write in prison, and has become the voice of the underdog, the oppressed, the poor. It was an omen to me that we should have this chance again.
The treat was that he had his entire family there, including Lucia, who hopped on the stage with him and enlivened the crowd with her comments and gestures, along with Baca's storytelling. While she can't read yet, she's practiced her writing and signed the book along with her father, after the reading.

Reading those poems now was all the more powerful since we've met her and have her signature, along with her father's.
These poems are full of hope and happiness, but they're not Pollyanna poems, because Baca weaves in the contrasts with poor and oppressed people and children around the world in our time of war and dismay. But that's for later, with a review and snippets.
http://www.jimmysantiagobaca.com/


All I know is that my soul and spirit always finds a rich oasis in a small, arid corner of the world with newly discovered springs of life you never expect. 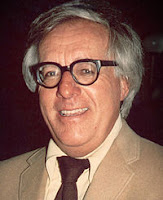 Dr. Seuss at the "debate"

I tried, I tried
to stay away
But couldn't bear
not to hear
what they say
and how they play

Tis finally the season
for a little reason
Not the blather
and all the lather
from all the nuts
with their "buts,"
Can we have just a little
sanity with all the spittle?

Double, double, toil and trouble
Witches' brew for the bubble
Get me the pliers
To pull out the liars.
Why do you bother
to say one thing and mean the other?
Is this a debate
to make us relate
Or just a show
with  lots of blow?

I want to whine
but the fault's not mine
they're out of time
and I want more wine.

Who is this fellow Clark?
That he thinks he's a lark?
You don’t need to hark
As he tries to make a mark--
Just don't go with him to the park
in the dark

When you look in the eyes of a child, and the eyes of grandchildren, you travel in time.
My recent trip to Missouri to see youngest son Derrick, his wife Naomi, and granddaughter Liberty Faye and new grandson Barrett Bryderick brought that home to me.
Speeding down  truck-crowded Interstate 70 in central Missouri near the end of a long day, my thoughts were on the textures and colors of an early fall landscape as another year swept swiftly by, like the mileposts on the side of the highway.
But when you arrive at the destination and pull onto the back roads, you slow down and so does everything else, especially when you move into the world of young grandchildren. Theirs is the world of "Now," of books and games and coloring books and food and naps and picnics and walks and swings in the park, and crying when things don't go right.  As long as there are loving parents, tomorrow and being in a hurry don't exist.
I watch my smiling son, eyes full of wonder,  lying on the floor on a rug with his son, six weeks old, turning his head to his father's voice. Now I know whey we still all like to sit down on the floor to read or  watch TV or just get in a different position. It's more than comfortable...it takes us back in time to when we were trying to life our heads, learning to turn over or crawl, before we were trying to take those first steps that would eventually separate us from playing on the present-tense floor most of our lives.
Traveling back in time, I can remember when each of my children were there. Traveling forward in time, I know the next time I see the grandchildren, they will have grown.
Before long, I will have to head back home down that hurried Interstate, to the world of tenses, because the future intrudes. But for a while, I travel in time to the world of "Now," where past and future are not separate, but joined in the eyes of children and grandchildren.
No comments: