You don't have to go to National Cemeteries, as impressive as they are, to get Memorial Day in your blood.

First called Decoration Day, the holiday has become a ritual for Americans of decorating graves not just of veterans but of family members.

I toured graves in south central Oklahoma yesterday with wife Susan, her sister Sarah Kaufman  and her father Jay Henry, visiting Purcell and the back roads and two cemeteries where once there was a settlement called Johnsonville--one of the earliest in what is now Oklahoma, and driving past one for a long-gone community once called Box.

Lots of stories to tell, and in the Purcell cemetery, funeral services were underway for a U.S. Navy veteran, American flag draped over the coffin, and a white-clad Navy bugler standing by to blow "Taps."

I love old cemeteries and always manage to find Confederate graves, even in remote parts of Oklahoma. While flags fly at other veterans' graves, these usually go neglected. I find myself wishing I had small flags to honor these Americans also.

This Confederate veteran, Sgt. Miles Keener,  from the Arkansas cavalry, died in 1893 in Purcell. I wonder about his stories. 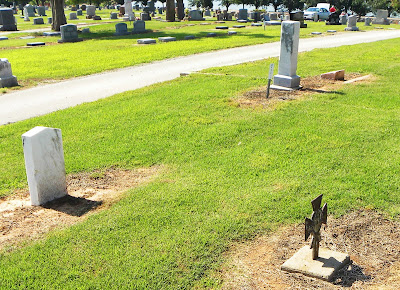 So did this veteran, Sgt. J.E. Barrow of the Mississippi cavalry.
I found this grave fascinating because of the iron cross at the foot of the grave and repeated on the headstone. More stories. 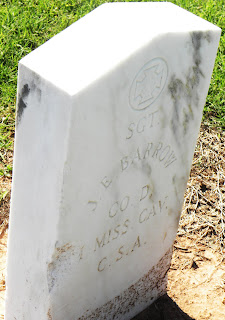 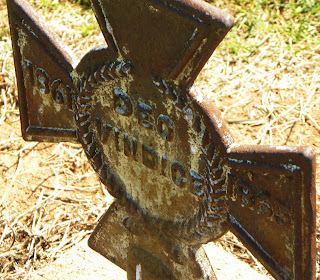 With the dates of The War on each side, it bears the inscription "Deo Vindice," which must be Latin for "God Will Vindicate You." That's a Confederate for you.
And then at the Old Johnsonville Cemetery, just down the road from The New Johnsonville Cemetery, was this grave, with an American flag flying there.

I wandered over to it, and while the name is illegible, I could make out "Missouri cavalry."
Then the volunteer caretaker of the old cemetery came up, a disabled Vietnam veteran who does this because he lives next to the cemetery and because he's a veteran, and he tells me it's a Confederate grave.

I told him I wished I had a Confederate flag to put on it.

His response was the they used to, but people kept stealing the Stars and Bars, and now the American Legion can't get them any more. But he went ahead and put this flag by it. I told him  I thought the Missourian would be pleased that Americans still honor him, because he was a veteran. The caretaker agreed. A veteran is a veteran. 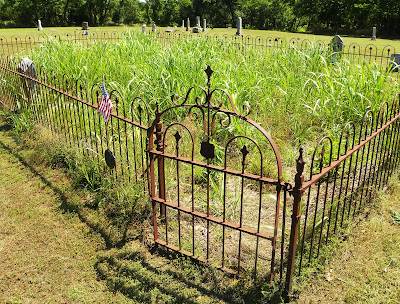 Nearby was this grave plot, the only area the caretaker hadn't mowed the day before, and a veteran's grave was marked with the flag. 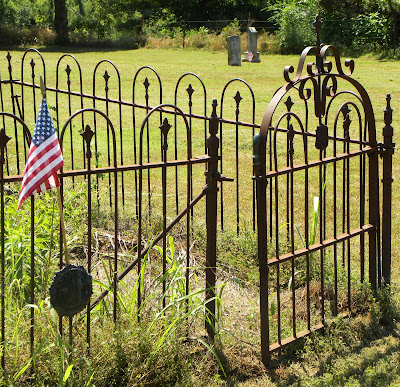 Another view...and for reference, the Confederate's grave is in the background.