The old Indian waited until the rest of the people had moved off from touching the small black box urn that held the ashes of Michael Henry Clark.

The small crowd of about  50 people had gathered at the Committal Center at the Santa Fe National Cemetery at 2:15 p.m. Nov. 10 under clear, but brisk November skies. Across the road, over rows of white-gray gravestones marching in military precision, you could just see the apartment where Clark,  who died Oct. 24 at age 89, U.S. Navy combat veteran of both WWII and Korea, had lived for more than 30 years until last November. 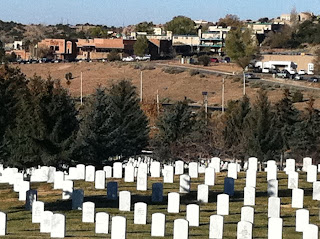 They came to pay their respects to him, mostly the many members of the  Romero family that had adopted Clark, and he them as a family, including Jo Webb, his long-time girlfriend and her daughter Lynn. Also there was his best friend "Mon" Moneno, who had helped care for him so much up until he had to move a year ago from the apartment to a veteran's home in Walsenburg, Co., and other Santa Feans,  people who knew him and had worked with him. They sat in folding chairs facing the urn, and gathered behind them, thinking about this life-long friend who brought laughter and stories and adventure to their lives.

And the old Indian, Candalario Lavato of Santo Domingo pueblo, and his wife, a Tesuque Indian.

After brief comments by a nephew, the three blue uniformed U.S. Navy sailors of the honor guard took over. Beforehand, two of them greeted the vehicle that brought the urn and the flag with stiff salutes, and marched it up the small hill to a table in front of the crowd.

Then they crisply unfolded the flag and held it over the urn, sunlight streaming through the red white and blue. The third member of the guard played taps. The two then refolded the flag, carefully creasing each fold, until it was complete. White-gloved salutes followed, every detail planned and foreordained.

One marched to the center, turned on a dime, approached Jo Webb, sitting in the center of the row of chairs, knelt down on one knee, and presented her the flag.

"On behalf of the President of the United States, and a grateful nation," he said, with a few other words, concluding with "Our condolences."

He stood,  saluted once more.  His final words were, "Quartermaster Clark, Shipmate."

The crowd gathered around the urn in a last attempt to say goodbye, and moved off, chatting, planning a big afternoon meal of celebration. The nephew stood there, and touched the urn one more time, when Mr. Lavato approached, dressed like everyone else against the chill--jeans and coat--except with a beaded headband. The 92-year-old WWII Army veteran, who had fought America's enemies, had worked with Clark at the Institute of American Indian Arts years ago. There the native Oklahoman Clark had helped the native American fight administrators, and as a long time teacher, was welcome at all the feast days or any other time in the northern pueblos of New Mexico, but especially that of the Lavatos.

He faced the urn, stood at attention, and quietly raised his arm to his weathered forehead, and snapped a final salute.