The gift of teaching...

I don't really like the ends of semesters, and can find them depressing, because, thought a time of success for those graduating, it's also a time of separation. Favorite students saying goodbye, wanting photos, introducing parents and husbands and wives.

My reward is not instantaneous like the byline all us journalists live for. Instead, you develop friendships and relationships built on respect, and then savor their success in later years, keeping in touch with  the memorable ones, and they with you.

I've been doing this so long now that I'm officially a geezer and curmudgeon, and I treasure having known these students.

And every once in a while, one of them brings a gift. Some are trinkets or cards or photos, objects of mutual respect.  That happened today, but it was no small item, as you may have known if you follow me on Facebook, but I can't help repeat it.

Here's what I wrote on Facebook:
"The rewards of teaching...I'm stunned. A veteran comes in today while I'm grading papers. His A is already posted. He works full time, and is married and has the passion and skills to be a journalist. He thanks me for the several classes he's had with me, for making him think, "Twisting his mind," he says. He knows from several references some of my favorite books. Then he reaches in his backpack, and pulls out this leather-bound book, new. "I may be a broke-ass student," he says, "but I found it on ebay. Look inside." I open it to the first page--collectors' edition of Ray Bradbury's Fahrenheit 451, signed with a signed certificate of authenticity! Just Wow. And thanks more than I can say."


I added that I meant mint condition, copyright and dated 11/8/98 by Bradbury himself.

So take a look. I'm fortunate to be a teacher. 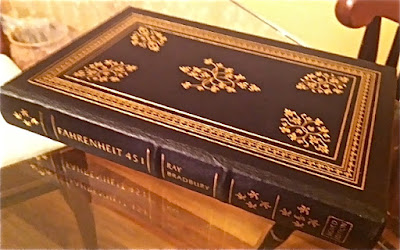 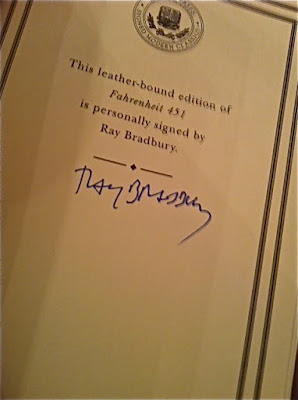 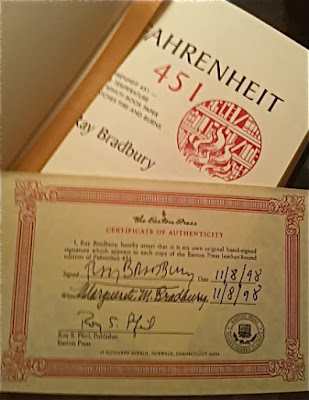