On top of Oklahoma

Each side of the obelisk has data of distances--Texas 31 miles; Colorado; 4.1 miles,. New Mexico 1299 feet, Kansas, 53 miles E.N.E.. Distances to New York, 1,605 miles,  and Los Angeles, 895 miles. Names of the survey crew, information on the granite from Granite, Ok. In the top view, and below at the base on the side of the south side,at my feet is the 50 caliber metal shell box weighted down with lava rocks that holds the notebooks you can sign in with, which I did in the 2012 spiral..."Terry M. Clark, Edmond, OK March 19, 2012. 9:56 a.m."
That's because it was Mountain Time zone there. I started my two-hour hike at 9 a.m. Central Time and walked across zones.

Two hundred yards south of the monument you can walk to the edge of Black Mesa and look out over the Dry Cimarron river valley below.
In the distance looking southeast, upper middle, you can see the light reflecting off the tin roofs almost-ghost town of Kenton, more than 600 feet  below the rim of Black Mesa. 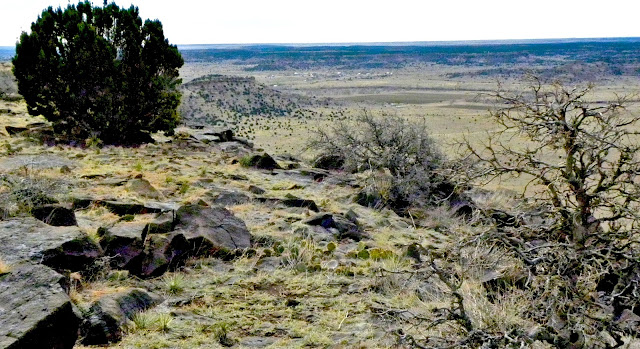 Look the other way and you see into New Mexico, with extinct volcanos Sierra Grande, left, and cinder cone Capulin, right, blue in the 60 miles distance, and the river bed winding into New Mexico. The tip of the rocks in the foreground is the edge of the 100-foot drop off of the lava cap that gives Black Mesa its name. 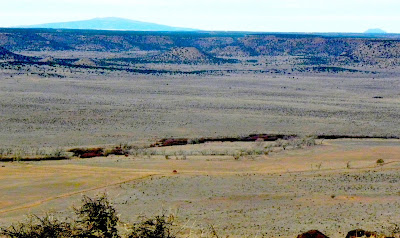 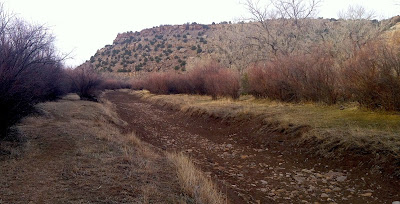 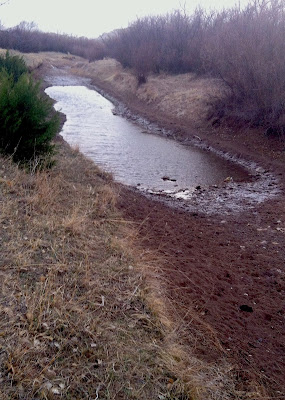 Post script. This is the "Dry Cimarron." Water rarely runs here, the head "waters" of the river I've canoed in near Guthrie, hundreds of miles down "stream." I stayed and Black Mesa Bed and Breakfast, a working ranch, and the "river" "runs" through its land. I took an evening nature walk down it, and found standing water and lots of foliage, which attract deer and turkey and other wildlife.