Having fun? You must be learning

Quit your jobs, start out on your own, in an area that's not your college major?
Why not? @RefreshCreate, Jenny and Bryan Grigsby have done that, running social media for 11-12 clients, mostly restaurants, like Hideaway. It's all been word of mouth references also...they haven't had to advertise.
They work from home, and their advice to #clarkclass was punctuated with humor and practical advice. 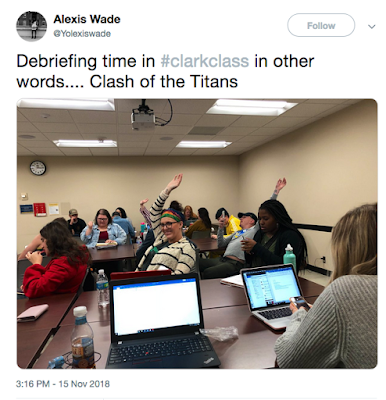 After they left, we debrief, which is apparently turning into a contest, as@Yolexiswade Alexis Wade tweeted a photo--"Clash of the Titans."
Judging by the smiles, we must be having fun, which means learning.