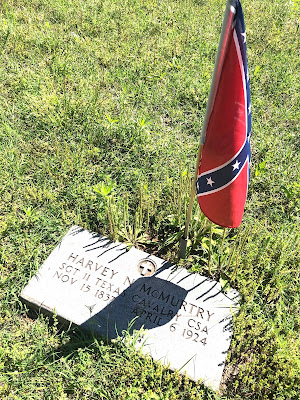 A flash of red, white and blue caught my eye in the cemetery in Waurika, Oklahoma, on Mothers Day,  raising my curiosity.
Every year I drive to the windswept hill and plant real flowers on my Mother's grave. Then after talking with her, I wander among the graves, recognizing the names of many people I knew when we owned the Waurika News-Democrat from 1974 to 1986. It's a bit of time travel for me, spurring memories, and a sense of mortality that increases every year.
This year, as I was driving back through part of the cemetery, I saw this singular flag on a gravestone, stopped and walked over to it, wondering, asking questions.
I'd never heard of Harvey N. McMurtry who died in 1924, and I'm used to finding Civil War vets' graves in rural cemeteries in Oklahoma, but was a surprise.
It's pretty easy these days to search for Union Civil War veterans' histories when you know what unit they served in, as with Reese Hildreth in the Oakwood Cemetery I wrote about earlier today.
I managed to find material on the Second Texas Cavalry thanks to Texas records, but no mention of his name or the roster. The officers are listed, but not the enlisted men. I did find an Ancestry.com link for a Harvey Newton McMurtry, born 1838 which I bet is him, with unknown death date and names of his parents. Nothing else. Stories. Questions.
As a Southerner, I have often wondered what it had been like to have survived that war, to have lost, and then lived for years afterward. He lived a long time after The War and for someone born in the 1830s.
Here is someone who may actually have been born in The Republic of Texas, then became a citizen of the United States in 1845, and then a citizen of the Confederate States of America.
So many questions.  Most of all, what were his emotions and stories, through the years? How did he feel, cope, adapt, to having been defeated?Did he regain his U.S. citizenship? How did he end up in Oklahoma? What did he do for a living? What about family? Had he owned slaves? Who decorates his grave? Is he in anyway related to the families of the writer Larry McMurtry of Archer City, Texas, which isn't that far away?
I did find out that Confederate Memorial Day is in late April, commemorating the surrender of the last troops. So perhaps that flag was placed then, and was still there early in May.
I am aware that that flag is politically incorrect these days, and I resent that racist and hate groups have turned it into a symbol of their demented minds. Sgt. McMurtry deserved better than that. (By the way, that is not the Stars and Bars, the national flag of the Confederacy. It is the battle flag, but no matter.)
But on this Memorial Day, this veteran also deserves a flag on his grave.
Sgt. McMurtry was well traveled. The rest of this, in his honor, is from the fascinating story of his unit, copyright material from The Texas State Historical Association, by Brett J. Derbes, 2011.

The Second Texas Cavalry was  organized in May 1861 as the Second Texas Mounted Rifles,   reorganized in April 1862 with the same officers and enlisted men.
It originally consisted of 1,200 men from 18 counties, mostly in East Texas.  It always served west of the Mississippi and briefly  attached to Sibley's army that invaded New Mexico. It  served in Galveston and Houston and then Western Louisiana before returning to Texas in 1863.
By late 1862  it consisted of 752 men, and by mid-1864 it had only 167.  In March 1865 the regiment consisted of 150 men who served at San Antonio.
Sgt. McMurtry and his comrades fought in many places in Texas, New Mexico (including the defeat in Glorieta Pass outside of Santa Fe),  and Louisiana. They were "dismounted" in March 1865 and gradually disbanded in May as many of  the men fled across the Rio Grande into Mexico. The unit officially surrendered at Galveston on June 2, 1865, almost two months after Lee at Appomattox.