I can get lost in cemeteries, especially National Cemeteries. Time seems frozen there, and on holidays flags adorn the graves. My imagination flows from the names etched on the headstones, wondering about the stories that will never be told, about the lives cut short, about the loved ones left behind.
The headstones march in perfect military precision over the hills and lawns, white against green, infinite patterns of life and death.
Most of the headstones are identical, though older ones disrupt complete uniformity.
I think my favorites are Vicksburg and Gettysburg. But Arlington is unique. Fort Smith is also old and inspiring. And I’ve viewed Santa Fe many times.
But there are other national cemeteries that choke me up too…that nation no longer exists, but its veterans are buried also at Vicksburg and in places like Manassas across a dozen states. Those veterans are excluded from the U.S. Cemeteries, though they fought in America too. Their graveyards are not as neat or prosperous or impressive, and a different flag decorates them.
At Vicksburg, you have to hunt to find the Soldier’s Rest cemetery on a shabby side of town where more than 1,600 Americans are buried who died fighting there. Nearby is the impressive National Cemetery, in the National Park where the earthworks of death are now covered with grass. More than 17,000 Union soldiers lie there, and about 12,000 are unknown. 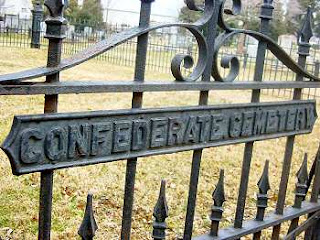 At Manassas, just a few miles south of Arlington is an acre of grass with an iron gate that says “Confederate Cemetery.” Inside, most of the graves unmarked and some unknown, lie 250 American veterans killed in battle and a single monument.
But I’m also moved every time I visit a cemetery in Oklahoma, and find graves of Confederate veterans who survived the war.
Usually there are no flags on holidays on their graves. I wonder what it was like to have fought and lost and then to spend the rest of your days living with the victors, under their flag?  What was it like, growing old, and remembering the days when you were young and barefoot, wearing butternut and gray, marching and hoping, charging to the shrill eerie cry of the Rebel Yell, and then losing, folding the flag even defiantly, walking home, and trying to rebuild a life? 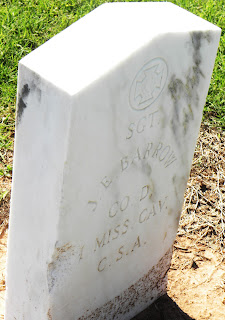 Usually their headstones list their names and their unit, and the dates of their lives. I found some most recently at Purcell and Johnsonville on Memorial Day. At Johnsonville, the old cemetery is tended by a disabled Vietnam vet. He can’t get Confederate flags, but he places an American flag on the graves of all veterans in the cemetery, including the Confederate soldier’s.

That’s a salute, from one veteran to another. I add mine to all veterans today.