When I was an Oklahoma Republican--chapter one

I grew up "liking Ike." How could you not, as a kid in grade school on Sandia Base in Albuquerque?

The world was full of promise and fun, of riding bicycles to school with friends. Lower middle class gringo in integrated schools--Mexican, Indian, black, gringo--it never occurred to me that there were people who were imprisoned by poverty or greed or crime, by lower or middle or  upper class prejudices.

In high school, I read "Conscience of a Conservative," by Barry Goldwater, and believed. I came to Oklahoma Christian College when Henry Bellmon was trying to be the first Republican governor of Oklahoma. The Democratic one-party monopoly in the state was corrupt and needed a shakeup. Of course I became a member of the Young Republicans. I'm a Southerner and Texan. Being for the underdog is in my genes.My brother Jerry says I like to be cantakerous. Guilty.

First hint that something was wrong was when I heard a fellow "Christian" at OCC refer to my debate partner as a "Nigger." Arthur Smith was a ministerial student from Valdosta, Georgia. I can still remember one of his phrases: "Blood is the red thread that connects Genesis with Revelation." My East Texas mother was prejudiced, but told me never to use that word. "I just don't want to live next to them," was all she'd say. Given where she was from, that was a huge leap of acceptance, I now know. Arthur and I subsequently lost a debate tournament at Abilene Christian College, when we had clearly won. The judge, a Texas "Christian" raked us for not being respectful. It took me years to understand why. He hated black people.

On the way home we stopped in Wichita Falls at a drive-in to get hamburgers. They almost didn't serve us. Why? Because Arthur was black. "You can order, but you can't eat here," was the reply. I was ready to leave. Arthur was hungrier than I. I just didn't understand. 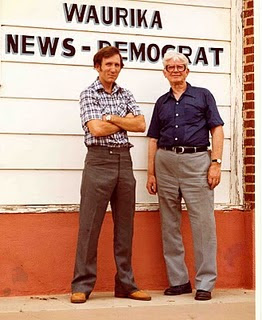 When we returned to Oklahoma from Iowa years later, and I was fortunate enough to buy into a partnership with Donald J. Morrison of the Waurika News-Democrat--thanks to some money from my mother, I joined a real Democrat in business. He couldn't stand my politics, but tolerated them. I rejoiced when Reagan was elected. He always maintained that Democrats cared for the working  people. When I wrote an editorial about Bartlett and the progress of Oklahoma, he about came unglued--thinking about his work with Kerr and the building of Waurika Lake.

We were on the edge of Little Dixie--Jefferson County--less than 200 Republicans out of 9,000 residents, and thousands of cattle along the Old Chisholm Trail. So I registered Democrat so I could vote in the primaries--where all elections were decided.

Still, I rejoiced at the election of Reagan as president. Morrison--my friend, my mentor, my model of community journalism's excellence-- is laughing in his grave now at where I've evolved.