Words of discovery--pages in December

I spent an hour looking these words up today. I'd underlined them  as I was reading a new book, and I'd completed four chapters148 pages out of 459, not counting index and other stuff. 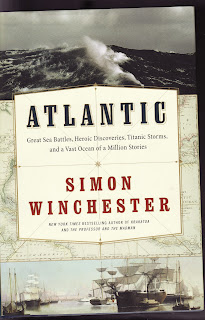 Oh, the book? "Atlantic" by Simon Winchester, telling the story of the ocean. First saw it two nights ago at Best of Books in Edmond, after dinner. Had to buy it. Winchester is one of my two favorite non-fiction writers. John McPhee is  still the favorite, but Winchester has written 20 of the kind of books I like to read, with travel, far-away places, geology, geography, history mixed together. So far I've read,  Krakatoa, The Map That Changed the World, and The Professor and the Madman--about the creation of the Oxford English Dictionary.  It ain't just history--it's journalism, the story of people.

Ironically, I was looking up those words in the OED today. I found one word not in the OED--"bentic." I did have to turn to the Internet for a few of the geographic terms.

How do you tell the story of an ocean? He starts before the beginning, sprinkling his narrative and smooth writing with lots of geology, and coming forward through the ages into explorers, travelers, discovery and mapping, politics and wars and storms and science and trivia (Did you know Hitler tried to buy an island in the St. Lawrence seaway?) to the present.

Winchester first crossed the ocean on a liner in the early 1960s. His storytelling captivates, mingling facts with humanity. I just make sure I have a pen nearby to underline words I'm not sure of. The chapter I'm in now is about the literature that grew up about the Atlantic--from Anglo Saxons to Shakespeare's The Tempest and more.

The only fault of the book is that it needs a much more detailed map, with larger type for these aging eyes, than the few included. I'll have to get out my world map for the rest of the chapters, and will still underline words, to be looked up later.