My dad had a wooden leg

My dad had a wooden leg.
The Oklahoma teenager was trying to jump a freight train in Tucumcari, New Mexico in the Depression when he slipped or missed the handhold on the boxcar's open door.
The big steel wheels sliced off his right leg between the ankle and the knee and his little finger on the right hand. Somehow he lived, not bleeding to death, not dying from the pain.  I guess you could say he suffered the rest of his life for that moment, though he didn't talk about it much . . . I never asked him.
I remember him talking about coming home  "to die" and about "feeling sorry for himself," until someone chewed him out and got him "back on his feet again."  He hobbled on crutches for awhile and then eventually got a wooden leg.
It must have been quite a shock emotionally, because a few months earlier, he had been "Iron Man Clark" on the Comanche Indian football team.  Short at five foot nine, he was husky, thick-chested.  He played tackle. You didn't get by him on that scrimmage line. He and a friend went to Juarez to celebrate graduation.
And now, well now he was a "cripple."
My uncle Mike, who has two degrees, said he was inspired by Dad to go to college. Mike came up to visit Dad at OU, and there he was, on crutches, pants leg pinned up, washing dishes to pay room and board and tuition.
Later he'd joke that the graduation trip to Juarez was worth it.
But once he learned to walk again, the wooden leg didn't slow him down.
The family was poor, as were most in Oklahoma those days, but despite the leg, he went to college to study his first love . . . art. They said he learned to draw before he learned to walk.  If you see his early work and sketches from art school, you'd believe it.
Dad specialized in portraits, later at landscapes.  He never completed a degree--probably running out of money, or perhaps just being too interested in art to finish the other requirements.
He headed west again and earned a bachelor's living in Albuquerque and Santa Fe, Taos, Carlsbad, in bars, hotel lobbies and nightclubs across the state. There he'd do "quick sketches" of whoever would pay, and some who wouldn't.  But 50 cents for a sketch would buy beans and gravy and more in those years and Dad was doing what he liked . . . drawing and traveling and meeting people and talking and living free in "God's Country."
When the War started, instead of going off to fight the enemy like his brothers did in the Pacific, he stayed at home . . . although he tried to enlist.  The Army didn't want a "cripple."  Perhaps the wooden leg saved his life, and is responsible for my brother and I being here. But he did his part, getting a job with Consolidated and North American Aircraft in Fort Worth, doing some of the drafting on the big B-24 Liberator bombers and the sleek P-51 Mustang fighters, aircraft that helped win the war. 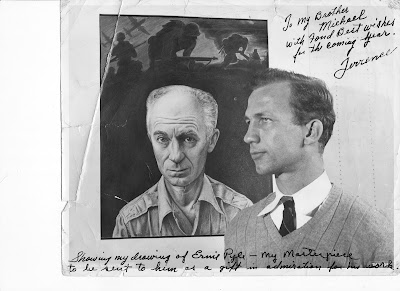 And the cripple also drew a portrait of famous war correspondent Ernie Pyle with a background war scene.  That portrait sold a million dollars of War Bonds in Dallas in 1944, and Ernie Pyle autographed the portrait for the "crippled" artist.  The portrait was given to Pyle and ended up in the correspondent's Albuquerque home, where his wife eventually burned it.
Years later, Clark and his family moved back to New Mexico where he could draw and paint landscapes in his leisure time.
His wooden leg became the brunt of jokes, which he enjoyed.  Even though he was a cripple, he went deer hunting in the New Mexico mountains with some archer friends one year. Someone wrote a humorous poem that if Clark didn't kill the deer with his arrows, he could beat it to death with his wooden leg.  He laughed.  We all did.
And the joke was on the others too.  Like the big dog that tried to bite his leg one day when he was riding to work on his motorbike. "You should have seen his expression," Dad laughed.
Most people didn't know about his leg. But every once in awhile when the wooden leg started acting up or a blister on the stump would form because of a slipped stump sock, he'd have to go to work or to church on crutches, his right trouser leg pinned up. People would stare in horror, thinking that something horrible had happened.
It had, a long time ago, but Dad had learned to live with it and if he was a cripple, it didn't affect the way he lived much.
He was a talented landscape and portrait artist with a keen eye for details, color and realism . . . that was his love, that and the big blue skies and rolling vistas and rugged mesas and mountains of New Mexico.  Everywhere he went there was beauty to be captured by his paints, his pencils.
That was before they had invented the use of the words "handicapped"  or “disabled.” Dad was neither handicapped nor disabled.  He was so nervous that he had to hold his hand still as he painted, but he was not handicapped. Certainly not disabled. He was a cripple, physically, but he worked around it and most people never knew.
With only a small portion of the talent Dad had, and the more I try and study, I'm more and more amazed at what he could do.
There's no disgrace in being a "cripple" or in the word itself.  I look at Dad's paintings and art work every day in my home and my office and see no disgrace, and rarely think of the wooden leg.  "Cripple" may not be a pleasant word--it is jarring, perhaps painfully accurate--but it describes nothing disgraceful.
You see, Dad had a wooden leg.  He was a "cripple."   So what?
Terrence Miller Clark is buried in Fairlawn cemetery at on the north edge of Comanche, just a mile or so from where he was born. On his gravestone: "His spirit lives in his paintings."
Yes, it does.