Booth is a Verb, chapter 8--Farsooth! 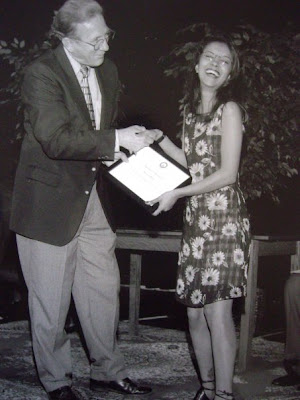 The Clark presenting an award to The Farsooth
(She is still trim and svelte. The Clark not so much so.)

Much of the lore and legend of The Booth came not from the faculty, but from the “chillen” as The Illidge would refer to them, his students. While he had little use for those who didn’t take their educations seriously—“I’ve got a tip for you, change majors!” he became a favorite teacher and mentor to many. He is still credited, almost with awe, by students for leading them to success. Even last year, one returning student, a survivor of some rough times and tattoos, said The Illidge was why he was going into advertising.

Indeed, The Illidge’s teaching was always passionate, and whether a freshman class or a senior class, presented with fervor and humor, as was his wont. For three straight years, his influence helped three minority advertising majors be ranked in the top 25 minority students in the nation, and he accompanied them to ceremonies in The Big Apple, where all got jobs. His colleagues held him in the highest esteem for his reputation for being a demanding, effective and well-liked professor , especially since his experiences with students led to many humorous stories when they “Boothed.”

Few students visited The Booth, because of the backward Baptist belaborments of the buckle on the Bible Belt which blindly banished booze by the university, which frowned on students, even of legal age, being recognized as adults, and ignored the long established practices of students and professors learning best when they gather informally, watered by the kindred spirits of inquiry, stories and good times.

Perhaps the first student to sample the spirit of Boothing was the Department Sweetheart, Farsooth the Malay. A tiny woman with gigantic spirit, humor, talent and smile, and perfect English, better than Okies, The Farsooth distinguished herself in all things computer and writing, and served as editor for the student newspaper and yearbook, winning top faculty awards, including outstanding service to the department. Yea, she returned to complete her masters’ degree also. She has since moved to the Big Apple, where she’s survived 9/11 and much more, but still doth correspond, by facebook, email and phone, with the department, especially the Queen Bee, and The Clark.

Reading this account recently, she wrote that she “teared up,” and The Clark asked her about The Illidge.

Herewith her response is relayed, because her views are so typical of so many students:

“I think I've been to the Booth once. All I remember is I got drunk from the margaritas. Mr. Illidge was very special to me. He was the reason Carmen and I moved to NY. I remember coming in to The Vista/Bronze Book office every morning and greeted by him with a Shakespearean quote and coffee. I got him a book of Shakespeare quotes one year, and we would pick out an appropriate quote that reflected our day. I often helped him format his emails...God forbid there were any misspellings or grammatical errors.

“He always asked about my family, knew each one by name and personality. And he often told me he wished I could see my family as often as he did. I miss him and think of him often when I get bummed out in this big city. Thanks for keeping his memories alive.”