The booth becomes a verb--chapter 7 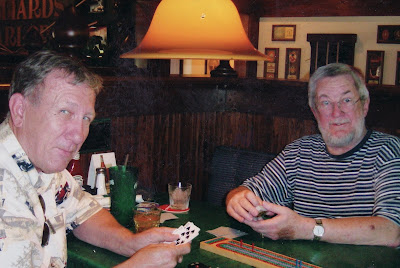 The Clark and The Illidge, the Cribbage Board, The Booth, and The Plaque
--photo by the Brunette Brett

But the tears came not from The Illidge, who, unlike Job, never complained about his physical discomfort. He did complain, and oft, about students who couldn’t pass tests, or construct simple sentences, or show up, or work hard. He was unsettled, but not complaining, when he and The Clark went to the university president, The Politician With Only a Bachelor’s Degree, to ask for a promotion based on The Illidge’s masters degree, only to be summarily dismissed.

But in The Booth, there was no weeping nor wailing nor gnashing of teeth. The Booth buddies only learned about his leukemia when he’d mention his trips to the doctors to check his blood levels, which were slowly changing. Still, his humor and fortitude inspired students and faculty—and those stories continue to this day, and shall shortly be revealed..

Thus it was that his colleagues, in admiration and thanksgiving, pitched in and had a small plaque made, with walnut wood and green metal to match the colors of The Booth, that read

The Booth
In Honor of
Bob Illidge
2002

And then The Clark and the others petitioned their bartenders, who talked to the managers, and convinced them, in view of their conviviality, large bar tabs and tips, to hang the plaque in The Booth. The Clark brought hammer and a nail, and one afternoon, did drive, with much audacity and firmness and joy, the nail into the paneled wall where they usually set, and did hang the aforesaid plaque, all without knowledge of The Illidge.

Then it was that the faculty planned a dedication for an afternoon to surprise The Illidge, and invited the entire department, visitors from other departments, and even The Good Dean—He Who Dances With Penquins. Yea, they all attended, including the Queen bee, and the plaque was unveiled to The Illidge’s honor and humility, among much raucous ramblings, laughter and “spirited” conversation.

Forsooth, it was at about that time that The Booth became a verb, adding to its legend and influence with faculty and students in the department. Instead of, “How about a Booth this afternoon?” The conversation evolved to “Booth?” and then to “Let’s Booth!” Eventually, it became “Booth!” as in “Charge.” And so it was that Booth became a verb, and always in active voice.