Booth is a verb, chapter 1 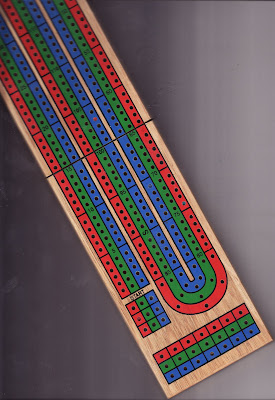 Ye olde, and actual, cribbage board of "The Booth"

And on the first day of the booth, commencing at 4 p.m. one sunny fall day, which was unremarkable and unmemorable to the profs as the years passed, they joked and the Illidge taught the Clark how to play cribbage…a game of cards and counting and moving pegs in holes endlessly around a board…somewhat like teaching in college, and certainly like being an administrator, other than it was fun. As the afternoon unfolded, with only grading to be done for tomorrow, the two shared war stories. Under the watchful eye of the student-bartender however, they would not share their preferred refreshments of vodka on one hand, and rum and coke on the other, which helped them forget the frustrations and stresses of higher education.

Lo, the Illidge, since he knew the rules, soundly thrashed the Clark in the card games, though the cards, dealt repeatedly for two hours, perchance did get sticky from their glasses’ condensation circles.. And in spite of several games and matching drinks, after generous tips, it is well reported that both were able to drive home safely, vowing to return. Henceforth, though they knew it not, the one-sided results of the card games, as well as their exclusive occupation of the booth, would not always be so.

On the morrow, as was their habit, they arrived early in the less-than-august halls of the university, yea, before most academics and administrators had even heard alarm clocks. It was, as it were, an unsaid competition between them, to see who would be first to start the coffee. Whoever was second would be greeted with insults, as in “It’s nice you came to work this afternoon.”

Then they would sit, in the pre-dawn darkness of the day, office lights not turned on, sipping coffee, dozing, sighing, thinking, occasionally exchanging words, but not constantly yammering as women, about issues and events of the day, but mainly enjoying the silence, the quiet. Until of course, the sun slowly came up, illuminating the aging clock tower of the university with its hands slowly, if ever ticking, as time slid by. Then the Queen bee of the department arrived, early as was her habit, unlocked the department office door, flipped on the lights, to the dismay of the optical pupils of the professors, and their outcry.

Lo, then the Illidge exclaimed to the fair Queen, even boasting, about his previous afternoon’s conquest of the Clark in cribbage. And the Clark could only cower that first day. And the Queen, with the exalted reputation of Dr. Sump, did nothing to assuage the stories, nor mitigate, nor even lessen them, much less deny them. So then the word of the Illidge spread, abetted by the Queen's royal reputation and humor, that there was this spot, this time when there was respite from campus control, from inane dithering, from the Clark’s type-A attitude—a veritable air-conditioned, and thoughtful oasis in the midst of Oklahoma aridity.