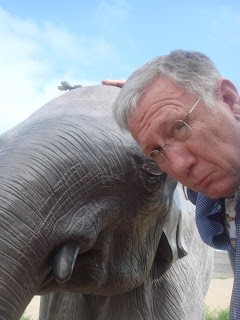 Statue of a baby mammoth(on the left) at Lubbock lake historic site where Clovis man slew mammoths and other wildlife more than 10,000 years ago. Neat museum, and statues of a mother mammoth, giant bison and bear as well.

See, Republicans are prehistoric but not extinct! (That's a joke, family members who happen to be of that persuasion).

I found this place when I was doing research for a novel years ago, set in West Texas at the panhandle town of Darling, where the main character Greg Caldwell ran a newspaper.

Like the mammoth bones found at lubbock, the novel's been buried a long time. Maybe it's time to dig it up.