An almost spooky story and view from the past


I broke my glasses the Friday of Memorial Day weekend, while getting ready for the arts festival and then a long road trip to Walsenburg, Col., to see my last uncle, Mike, in the Veterans Home.

Now I can see at a distance in daylight pretty well, which is why I have the nasty habit of taking my glasses off and putting them down where I can't find them, or in this case, step on them. But the eye strain is increasing in dim light or anytime, and I definitely need them--the cool ones with the gradual bifocals, to read anything smaller than 14 point type, without strain.

But you can't get anything done on a holiday weekend, so off I went, using sunglasses and reading glasses as needed, knowing I'd have to come back and get new glasses--and it was pass time for an annual exam anyway.

But when I got back, in the still cool weather of early June--which seems unreal now--I started cleaning out the garage of accumulated stuff. You know on Facebook of my getting rid of more than 200 books and National Geographics. Still there are other boxes there, including stuff you cant throw away but don't know what to do with. These include  a lot of my Dad's early drawings, family photographs, and mementos and memories of an earlier life.

I've written previously of "Momma's glasses," (Sept. 14, 2009 on this blog--read it if you haven't) so you know what I'm talking about. Anyway, as I repackaged and sorted "stuff"  from my Dad, I was going through this one cardboard box of things that belonged to him before he died in 1973.

When I got to the bottom of the box, I saw in one corner an old eyeglass case. When I picked it up to throw it in the trash, it felt too heavy. So I gingerly opened it, and inside....inside were a pair of old glasses--untouched for almost 40 years.

I gingerly pulled them out. they were glass lenses, and trifocals. So I naturally picked them up, unfolded them, and decided to try them on...out of curiosity, to look through lenses my Dad's eyes had once.

I couldn't believe my eyes...the prescription, all three levels, were perfect.

I knew putting them on made me look old and uncool, and the wrap-around ear pieces were difficult to get used to--as is the glint of light off the clear lines of the trifocals. But I'm really sort of cheap, and didn't want to buy new glasses, even with insurance, if I could help it. 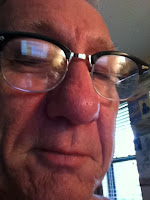 Then my young and cool stepdaughter Alexx saw them and said they were "cool. Retro is in." Another cute young thing at a restaurant commented on them. My stepson Chad saw them and said, "I want those  glasses." A not-so-young guy (my age) at a bar/restaurant this week, saw them and couldn't stop talking about them, telling me stories about his dad, and so forth.

I occasionally think about what Dad saw, looking through these lenses--but I know, I have lots of his artwork to know. So I think I'll keep them...Even as I write this, they give me a whole new way of seeing.