The delicious taste of memories 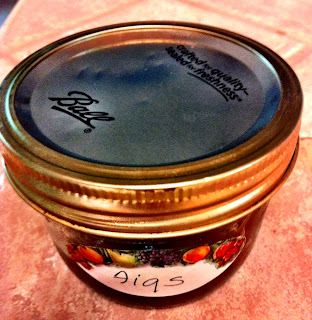 The package fit snugly in the mailbox when I opened it the other day. The Texas postmark gave away the sender.
Inside the box that I hurriedly opened in the house were two small Ball canning jars, with a colorful label on the side and the firm, handwritten word, "Figs."
How long it has been... . Fig preserves from deep east Texas, but more than just east Texas. I opened one can, took a fork and put two of the figs and sauce in my mouth, awakening flavors I'd forgotten, and memories of times long past. And these figs are especially sweet to my taste and past.
Yes, in the past few years I'd managed to find fig spread in some stores here, and a few restaurants carry limited fig appetizers. I'd forgotten when I liked them so much.
Years ago when I was a kid, we'd make the long pre-Interstate drive from arid New Mexico to humid East Texas to visit my aunts and uncles and cousins. My mother came from a large family, three sisters and two brothers and more than a dozen children. We were the only ones who lived so far away, and thus our summer vacations were family reunions.
Thus the taste of figs. My mother's sister Gladys, her husband Clark Lutrick, and my cousins Charles and Sarah Beth lived in Houston where Clark worked for "Ma Bell." I was always fascinated by their neat brick house, surrounded by that thick-bladed and always green St. Augustine grass, which wouldn't grow where we lived.. And in the back yard was a fig tree. Barefoot I'd try to climb the tree and taste them if I couldn't reach one on the limbs, or if I couldn't reach them, uncle Clark would pick one for me. And inside the air-conditioned house (another novelty to us desert dwellers), there would be home-canned jars of fig preserves.
"Larrupin good," as my Dad would say. Cousin Charles was the first of the clan of cousins, and grown by the time we visited, but my cousin Sara Beth, her sassiness matching her red hair, was there and she'd find ways to tease my brother and I.  Those who know me today now know where my attraction for redheads comes from.
Over the years, we lost touch, as families spread out, like creepers on ivy, jobs and children and marriages and funerals leading in all different directions. But several  years ago, some of cousins suggested a cousin reunion, down on the Gulf Coast. As the only cousin living outside The Republic--following the genes of the other side of the family--I traveled the farthest. As we aged, the idea caught on, and we've had two or three more reunions now, and that has reawakened friendships and memories.
The most recent was just over a year ago at the home of my cousin Sarah Beth and her husband Bob Foote, near Plum Grove, Texas. All but one living cousin were there, and we had barbecue and photos and laughs and memories and more. I've started sending watercolor cards and gifts to some of the cousins, including Sarah Beth.
More than 20 years ago, her father brought a sprout in a gallon bucket  from that long ago Houston fig tree  and planted it on their place in rural East Texas, amid the St. Augustine grass. It has flourished, reaching more than eight feet in height. This year Bob pulled down those branches to stuff more than four gallons of figs into bags. Sarah has put up nine of the jars from one of the gallon bags so far and expects many more.
Since that reunion a year ago, Charles Lutrick has died. I'm so glad we made him get out of the car before leaving to take a group photo. I was thinking about that, among many more memories, when I ate some canned Lutrick-tree fig preserves on toast this morning.