The longest "day" of the year, when time, the sun "stands" still--the literal translation of "solstice,"
as the sun begins its journey toward shorter days. This marks also the end of an unintended  three week "blogcation," the longest interruption in writing in the five year history of Coffee with Clark.

It is appropriate to show a photo of one  of the places of power in the world,

one of my places--Fajada Butte in Chaco Canyon in New Mexico. Atop that 300-foot sandstone land mark is a "sunmark"--where the Anasazi more than 1,000 years ago erected  stones  to form a "sun dagger" to accurately record the solstices, equinoxes and even moon cycles. It probably had to do with planting seasons, and more, with religious rites.
We increasingly urban folks mark the first day of summer or other seasons on a calendar, but are so out of touch with nature and the universe that  seasons don't have as much meaning as they used to. For us, "time flies." Time may not have stood still with multiple ideas that were "meant-to-have-been" blog posts, but weren't. Even this one is difficult, but like an eventual shaft of sunlight between rocks, there are more stories to tell. 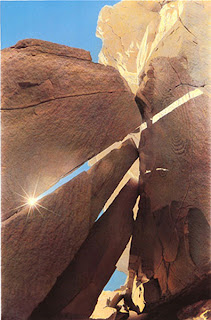 Alas, vibrations from the increased traffic far below Fajada, and the years, have shifted the rocks, even with restoration by Park personnel. So today's solstice didn't quite hit the mark.  I can not imagine the knowledge and patience it took to build a site like this, or the ones at Mayan and Inca sites, or at Stonehenge. Years were required.
The only way to see Fajada at dawn is to camp there overnight, 26 miles of gravel road off the highway in northwest New Mexico. It's cold, but so worth it. At night, you can see the stars move overhead, actually sense the earth moving. And as the shadows climb up and down the sandstone cliffs at down or sunset, you can see time.
so in the time that's flown by these last three weeks, there were going to be posts on Reduxion Theatre, on Frank Francese's watercolor workshop at IAO, on the 40th Prix de West art show, on music at Paseo, on freelance writers, on the 107th country blog reader, and more. You can't "catch up" in time, but you can get glimpses of the past, at Chaco, and in words, soon.