Decorations and stories amid the gravestones

Today there will be American flags on thousands of veterans graves in America and around the world.
Cemeteries beckon me inside their gates, especially National Cemeteries and small rural ones. When I'm traveling backroads and see one, I invariably stop, get out and wander through them, reading the names, the dates, wondering about the stories. I don't think I'm morbid, though as I get older I'm more aware of mortality, but that's not why I'm so fascinated.  They are emotional experiences that prompt my imagination, curiosity and wonder.
And on this Memorial Day, originally Decoration Day, I'm more aware. I've visited six national cemeteries--Gettysburg, Vicksburg, Fort Smith, Arlington, Punchbowl in Hawaii, and Santa Fe. On my bucket list is Normandy, on D-Day. I hope next year. I've also visited Confederate cemeteries at Manassas and Vicksburg. As a Southerner, I'm in awe at all of them.
I'll admit a special fondness for Santa Fe, where we buried my late favorite uncle, Michael Henry Clark, almost four years ago. Wish I was there to put a flag on his grave.
Unfortunately, I can't find my photos of Gettysburg, or even Vicksburg, but they remain vivid in my mind. The past is not dead in those places, but talks to you..
As I travel the backroads just around here, I've come across many graves of veterans, of black and white  Americans who served their country in many wars, including scattered graves of Confederate veterans. These add to my sense of stories lost and untold. 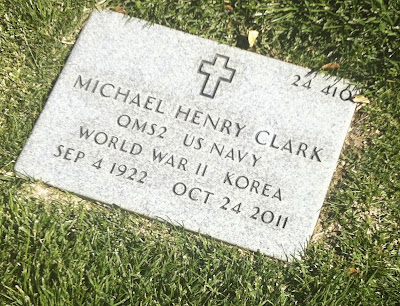 So here are photos. Listen and you can imagine taps being played, caressing each grave. Next, the private cemeteries.

And here are the concluding lines of "Thanatopsis," by William Cullen Bryant, that I memorized in high school long ago. Seems fitting. Salute those flags today.

"So live, that when thy summons comes to join

The innumerable caravan, which moves
To that mysterious realm, where each shall take
His chamber in the silent halls of death,
Thou go not, like the quarry-slave at night,
Scourged to his dungeon, but, sustained and soothed
By an unfaltering trust, approach thy grave,
Like one who wraps the drapery of his couch
About him, and lies down to pleasant dreams."