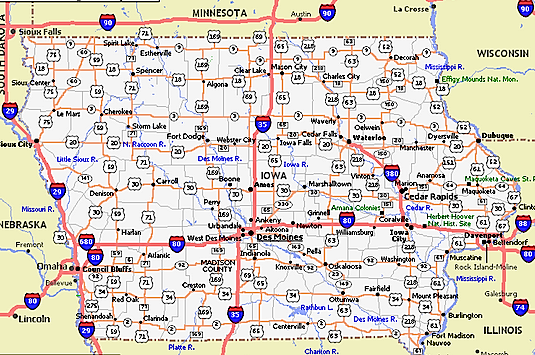 I get misty when I think of Iowa.
This was my rant today on Facebook, in the wake of the presidential caucuses:
"I am really getting tired of all the high techy, big city snobmedia and pundits looking down on their noses and making fun of the Iowa caucuses. Excuse me--they don't fit in your pigeonhole so you can stereotype the people as hicks and the system as archaic? Hey, they use pencil and paper, they get together civilly, vote in a true democracy where every vote counts, and dare to do it differently than any place else in America. You gotta problem with that? If American politicians and the system make a bigger deal of it than perhaps it should be, it's your fault. Iowans are glad you're gone. And besides, you ougtta have to come up here and suffer the winters if you're gonna be so uppity. They can handle it, if you can't."
Pardon me, but it's personal.
Three of my four children were born in that state, and my fourth child, and his family now live in Dubuque, on the northeast side, and "caucused" yesterday. Proud I am.

"Iowa, where the tall corn grows."

My wonderful wife Neysa and I  moved from Oklahoma to Hawarden, in Northwest Iowa on the South Dakota border by the Big Sioux River to teach high school English many years ago, following friends, "establishing" a church, renting a Seventh Day Adventist church, driving to Sioux City and Sioux Falls every once in a while.
I never saw so much green, so much great rolling rich dark glacial farmland, America's Mesopotamia, nestled between two great rivers...full of life, corn, soybeans,  tempered by brutal winters, but with great solid people who valued education and hard work. In northwest Iowa our first son was born, Vance Conrad. Story below.
From there we went to Iowa City to get a graduate degree in journalism, and then to southwest Iowa to be an editor of a semi-weekly paper, the Herald-Journal, in Clarinda, Iowa, where our second son, Travis Austin, and our daughter, Dallas Page, was born.
Then we moved back to Oklahoma to be near family, worked at the Duncan Banner and bought into the Waurika News-Democrat, where our fourth child, Derrick Rogers was born.
Since then there has been happiness and sadness, successes and failures, but Iowa remains, deeply a part of all of us. I can go on and on about its influences in our lives. I understand why it is the original "American Heartland."
Misty-- from an earlier post:
"We headed east over the rolling hills of northwest Iowa  years ago.

"The rising sun turned the mist from the corn golden, as we sped up and down the hills in a light green Volkswagen to the hospital 30 miles away in LeMars. My wife's contractions had started before daybreak, and we left the house shortly after 5 a.m.
"'Come in here, you're responsible for this,' said the red headed doctor O'Toole, handing me a gown and mask, and about noon, a baby boy was born.
"Those memories are still real, and I know his mother remembers even more, because mothers remember more than fathers do, including  more about the births of our other three children.

"Years have passed and there have been lots of ups and downs since then for all of us. But we're blessed with our children and grandchildren. That boy is now M/Sgt. Vance C. Clark, USAF... ."
Our  other Iowans--
A chilly night
Third time is a charm