The colors of God--a sad story 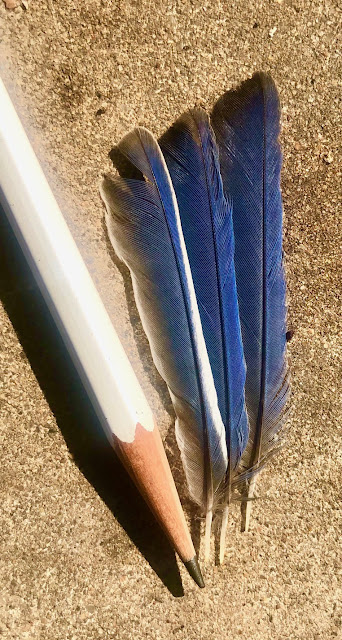 I buried a bluebird today.

It died on our back porch three days ago during the 10 degree cold of our February snow storm. Robins and other birds including bluebirds, swarmed in the yard, around our feeders. When I first saw it, it sat there, fluffed up, barely moving. It's mate huddled against it, twitched, fluttering try to keep it warm.

I went outside, and its feet were curled up, and hits eyes dull, with eyelids half over them. I started talking to it, telling it I was so sorry. I felt its chest, and while it wasn't frozen yet, there was no warmth at all. I picked it up by its tail and I bet it didn't weigh five ounces. I dug a hole in the snow and covered it up to prevent it from being eaten by crows or jays.

Today as I looked out the window, there it was on the bare ground where the snow had melted.  When I  got my shovel and went to bury it, I found a dead robin a few feet away, also a victim of the cold.

Before I picked it up to put it in the hole I dug near a tree, I pulled three of its tail feathers out. Then I placed them together, covered them with dirt, and patted it down.

Bluebirds have arrived in our yards this season, and we look for them every day. During the cold snap, they were almost everywhere, near our feeders, their brilliant colors standing out against the drab days.

The feathers are now part of a small planter in our kitchen window, reminding us of the joy and beauty of creation, even in the midst of grief and destruction. I will also remember forever, that dedicated partner forlornly and desperately trying to warm  its mate.

Looking at the miracle of those feathers, their beauty and design, and I think, they are surely the colors of God.