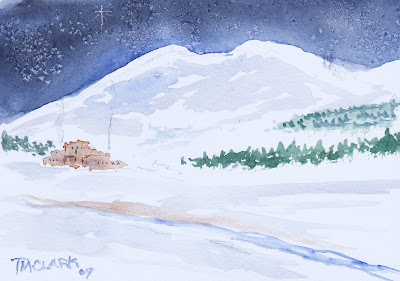 Taos Pueblo casts a spell over everyone who visits northern New Mexico, especially artists. I have drawings my Dad did there 70 years ago, and most famous american artists have tried their hand at it. I'm no exception.

What is it with the multi-storied adobe that has become an icon, inhabited for hundreds of years before the white man discovered it? It sits at the based of Taos Mountain, a holy place where no white man can go. People live there, with no running water, and in other more modern houses at the pueblo. They constantly repair the adobe with fresh mud and bricks, so its actual contours change slightly every year. The Indians make the most of the crowds of tourists, charing entry fees, and fees for each camera. You must ask and pay to take individuals' photos. You should. When you are there you are guests in a foreign country...the Constitution of the United States does not apply there. These people and their culture and laws pre-date it, and I expect that they will be here after the United States is history.

Most believe that the pueblo Indians are the descendants of the Anasazi who disappeared about 1,000 years ago from settlements on the Colorado Plateau west of Taos. If so, then they were the first immigrants. The Spanish and the gringos were only the more recent.

These walls saw Coronado in 1540, and Kit Carson 300 years later. I believe the magic of Taos is part of its value as metaphor for the rest of us who in the terms of the old Gospel song, "This world is not my home, I'm just a passing through." Taos teaches us how fleeting we are in time, and perhaps by visiting and painting it, we become part of its existence.